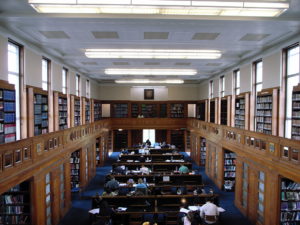 At the New Chaucer Society Congress in July 2016, I was fortunate to attend the Graduate Student Workshop on Manuscripts organised by Dr Aditi Nafde. The workshop consisted of a series of mini-lectures on the Sunday before the congress officially began and a ‘hands-on’ experience on Wednesday afternoon. I had previously followed the Stanford Online course, Digging Deeper: Making Medieval Manuscripts led by Professor Elaine Treharne (@ETreharne) and a team of scholars at the Universities of Stanford and Cambridge, so I had some prior knowledge of medieval book production, and the scholarly terminology used to describe manuscripts, but this was my first opportunity to encounter manuscripts directly rather than virtually.

During the first half of the workshop we covered a large range of fascinating material related to medieval manuscripts and print: London scribes and scripts (Simon Horobin), correcting (Daniel Wakelin), illumination and reading practices (Jessica Brantley), paper and materials (Orietta da Rold), binding (Alexandra Gillespie), and print (Alexandra da Costa). Though some members of the group had more experience of palaeography than others, the first half of the workshop was engaging and informative and there was certainly something new for each of us to learn and a range of activities to encourage us to look at the tiniest details of a manuscript or book.

On Wednesday, after arriving at Senate House Library, the location for the second half of the workshop, and a brief look at the Shakespeare: Metamorphosis exhibition (running until 17th September 2016) we congregated in the Special Collections Reading Room where five manuscripts were laid out. Having had little experience of viewing manuscripts in the ‘flesh’, I was particularly excited for this part of the workshop and it certainly did not disappoint. Following a brief introduction by Aditi and Tansy Barton who oversees Manuscript and Print Studies at Senate University Library, we were armed with a guide detailing how to describe a manuscript and tasked with identifying the manuscript in front of us and giving as much information as possible to our peers.

Initially unbeknownst to Grace Timperley, a PhD student at the University of Manchester (@GTimperley ) and myself, we were sat in front of one of the most famous manuscripts containing ‘The Vision of Piers Plowman’, MS SLV/88; popularly known as the ‘Ilchester’ manuscript and dated c.1400. The manuscript is so badly damaged that we were unable to handle it but it was thrilling to be able to see the colour and detail on the manuscript page and the distortion the tears and damage had caused. Using the guidelines, we made note of any significant details and proceeded to share our findings with the rest of the group before hearing their own summaries.

The workshop not only provided an opportunity to expand my own knowledge of palaeography, it also provided a vibrant networking opportunity as it allowed a group of graduates, working on very different areas of medieval studies, to interact and find connections between their areas of research that will hopefully lay the foundations for future collaborations.

I spent most of my train journey home that evening researching the Ilchester manuscript and confirming some of the details that Grace and I had noted down; I also found out more information that correlated with much of what we had learned during the first half of the workshop. Thus, the greatest achievement of the workshop for me was that it served as a reminder of why I chose medieval studies in the first place; by looking at the smallest details of a text or manuscript, we might make new discoveries and expand our knowledge of medieval culture.

Women’s letters from the margins: the case of Alice of Worcester

Naming the Rapist in Chaucer’s “Legend of Philomela”