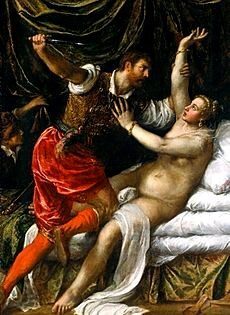 In Chaucer’s Legend of Good Women – a project of dubious sincerity, in which Chaucer’s narrator claims to be telling stories of ‘good women’ and the men who betray them – there are no fewer than two rape narratives. The more gruesome of these is the story of Philomela, famous from Classical literature, and also the basis for Shakespeare’s even bloodier version in Titus Andronicus. The Latin version of the story, which Chaucer probably knew best, begins with the rapist, Tereus, who falls madly into lust for his wife’s sister Philomela. Tricking her into following him to a remote location, he rapes her and then imprisons her, cutting out her tongue so that she cannot speak. The imprisoned Philomela weaves her story into a tapestry, and sends it to her sister. United, the sisters turn the tables on Tereus in bloody revenge, murdering his son, and feeding the child’s body to him. As Tereus, maddened, chases after the women in a rage, the gods transform all three figures into birds.

The medieval Latin legal term for the crime Tereus commits is raptus, a word that means both sexual violation of the kind Tereus unambiguously carries out, and also abduction, and even, conceivably, the consensual abduction of a willing woman. The word is notoriously ambiguous, and its disturbing ambiguity contributes to the murky subtext of Chaucer’s narrative. For Chaucer teases his readers with the familiarity of the Latin version of the story, the version that culminates in the transformation of all three characters into birds. He repeatedly foreshadows this metamorphosis, describing Tereus as ‘foule’ (fowl) and incorporating from his sources a simile comparing the rapist to an eagle seizing a dove in its cruel talons. The simile hints at a further hidden pun. An eagle is a raptor, a bird of prey; a rapist in Latin is a raptor, a person who engages in raptus. The avian pun was available to a late fourteenth-century writer. As Chaucer’s contemporary, the translator Trevisa, evocatively puts it, ‘the Goshauk … is i-clepid … raptour and rauyschere’: the goshawk is called a raptor and ravisher. The transformation of rapist into hawk, raptor into raptor, offers a tantalisingly perfect coincidence of language and meaning: Tereus’ hidden crime publicised in his bird-form, his human name lost and collapsed into his avian identity.

At the surface level, this implicit pun fits with the narrator’s moralising gloss on the text. Right at the start of his story, Chaucer’s narrator compares Tereus’ name to a corrosive venom, a substance so corrupting that it infects the eyes of the reader who reads it, and deforms the very meaning of the word ‘man’. At the end of the narrative, we are warned that it is only fear of a loss of reputation that prevents other men from joining Tereus in his violent attacks. Rape – so we are led to believe – indelibly marks and stains a man’s name in the world.

Yet, as so often, Chaucer’s puns lead us up the garden path. At a crucial moment in what, for earlier readers, was the middle of the story – the scene in which the weeping sisters are reunited over the tapestry that mutely communicates Philomela’s violation – Chaucer stops short. He refuses to give his readers the classic account of the women’s revenge and the transformation of all three figures into birds, insisting that the tale is done. The disturbing similarity between the muted, mutilated woman and the truncated narrative makes it easy to see the text as a form of literary violence, a corpus of inherited tradition cut short and a woman’s body butchered, and both ending in premature silence.

This dramatic ending, however, threatens to distract us from a more disturbing undercurrent in the text, an insistent resistance to give the rape – and the rapist – the unambiguous condemnation he deserves. Hinting at the raptor pun and then averting it, Chaucer draws on a key uncertainty that spills through the other versions of the tale. While Sophocles’ Greek version (almost certainly unknown to medieval readers) does make Tereus into a hawk, recognisable by its sharp beak, Ovid’s Latin disagrees, declaring ‘nomen epops volucri’: the name of the bird is “hoopoe” (Mets 6.674), and it can be identified by its weapon-like crest. Gower, Chaucer’s contemporary, adds to the confusion: the name of the bird-rapist is a lapwing, ‘the brid falseste of alle’ (Confessio Amantis 5. 6047). Like contradictory witnesses, the authors of these other accounts of the rape of Philomela disagree about a crucial detail, and that indelibly marked name – the name of the rapist, the name of the bird – dissolves into competing anecdotes. Each author assures us that the bird makes visible the inner identity of the rapist; each name – hawk, hoopoe, lapwing – publicises his crime. And yet, each name is different, offered anew, rewriting an older identity for the same rapist.

In Chaucer’s text, the uncertainty about the name of the rapist is bedded even deeper into the weave of the narrative. On the written page, Chaucer’s Tereus ‘loses’ his name repeatedly, long before the moment at which the averted transformation should have overwritten it with the name of a bird. Copying errors render Philomela’s rapist disturbingly easy to confuse with the protagonist of the previous narrative, the similarly-named Theseus. Scribal confusion between the two would be suspiciously predictable for anyone who knows how medieval scribes tend to operate, and especially in the flowing structure of the Legend of Good Women, which barely marks breaks between separate subsections. Chaucer, who notoriously uses the metaphor of ‘rape’ to describe the copying errors of careless scribes in his ‘Wordes unto Adam Scriveyn,’ may well have anticipated such confusion, and Tereus becomes variously Theseus, Therius, Tireus and Teseus as his narrative unfolds across the manuscripts. In one manuscript, a scribe marking proper names with capital letters, rubric and underlining struggles to recognise ‘Tereus’ as part of the proper name category; in another, the very line in which Chaucer laments the corrupting effects of Tereus’ name on the material fabric of the world is written over a scrubbed-out erasure, the ink darker and spiky over rough scraped parchment. Finally, at the end of the narrative, Chaucer refers to Tereus as a “morderour and knave,” without specifically naming his crime of rape. Like the cutting of Philomela’s revenge from the record, this lapse mutilates the narrative. The earlier passionate emphasis on the corrosive, horrific power of the rapist’s name gives way to a muted uncertainty, a grey area of doubt, and our resistance to its strange vagueness is worn down by the repeated exposure to a rapist whose name does not remain the same throughout the manuscript pages we read.

These scribal errors and erasures occupy the grey area between strategic continuations of the theme of reluctance to name the rapist, and accidental or unconscious errors, whose ironic aptness is only coincidentally visible to us as we read. The rapist – the raptor – slips out of the reach of language, dissimulating, fragmenting, renamed and reclaimed, hidden and excused, under a variety of new versions that rewrite Tereus’ fate slightly differently each time. Even as he claims to be publicizing Tereus’ crime and naming him as the rapist, Chaucer’s text works against itself, shrouding Tereus’ name in ambiguity, just as the wider tradition of Philomela narratives refuses to commit to a single, unambiguous version of his punishment.

In this, Chaucer constructs a cognitive dissonance about rape that is still hugely influential: a narrative that assures us of the corrosive, powerful importance of naming rapists, and a narrative that simultaneously works to cut out, obscure, rewrite and euphemise, the name of the rapist. What’s strange to me is that this contradictory rhetoric still seems so prevalent in modern responses to the study of rape in medieval texts. This conference season, there were several papers at NCS on the subject (including mine), and from what I heard of conferences at Kalamazoo and Leeds, patterns were similar elsewhere. Papers and posts on the rape in the Reeve’s Tale stir up particular controversy – ask Carissa Harris and Rachel Moss – but there’s a wide trend of responding to the word ‘rape’ in the context of medieval literature with a knee-jerk backlash of qualifications, clarifications and obfuscations. Rape attracts a fluent rhetoric of denial and dismissal, a rhetoric that is both remarkably unchanging across times and places, and incredibly insistent upon the temporal specificity of the doubts it expresses. Of course, it’s necessary to know that raptus is an ambiguous word, but – as Chaucer’s “Legend of Philomela” indicates – that ambiguity has a long history of being pressed into service to blur out the names of rapists, to stop us from naming rape.