Hello again! Before heading home to Canada for Christmas, my dad had told me to try and have one more adventure before leaving. So on the Saturday before our departure, my cousins Victoria, Gabrielle and I decided to explore a bit of more Surrey. We had initially thought of going into London which has so much to offer at Christmas time, but decided that we were looking for something a little less busy and were craving a good nature walk. So five minutes before leaving I googled best hikes in Surrey and decided to head to a nature park in Goldaming. We took an Uber which took 25 minutes and cost 1 pound given that we got 20 pounds off for our first ride with the app. It was quite exciting deciding to put ourselves a bit out of comfort zones especially given that the pay off was so good. We paid 8 pounds to get into the park and walked around for an hour and a bit. It was a fogy day which added to the whimsical-ness of the English countryside. I was in good company in a beautiful place.

We then asked the ladies that were working at the park how we could get into town which they recommended the local bus. It was quite an experience standing on the tiny street flagging down the bus but we made it on. We got off where what seemed to be the center or downtown area. We walked about and admired the architecture and design before deciding on a tiny pub called The Star. We all decided to try some cider and beer as the pub had several awards posted up on the walls for them. Victoria and I also decided to try our first jacket potatoes which were so good. The cheddar was really nice and the potato perfectly cooked (compared to the food I’ve been attempting at my apartment lol). We then walked around some more and browsed in some of the shops before finally calling an Uber to head back home (this time it took 15 mins and cost 16 pounds). 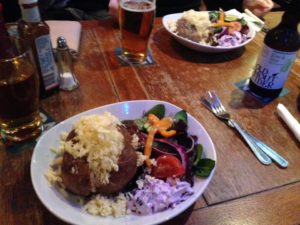 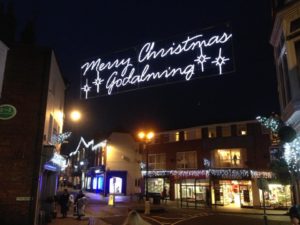 It was such a great day and I am so happy I had the two girls with me to experience the day. I hope you too get to go an adventure soon!