Hello! This post will be a continuation of the series about the Student’s Union say trips I have been able to participate in thus far. This trip was a day in Oxford, and I have to say that this might be my favorite day that I have spent in England thus far. The city was so beautiful and the atmosphere of history and intellect surrounded us everywhere we went.

For this trip I was joined by my cousin Gabrielle, Heather, Damira and Alice. The coach picked us up around 10am and then it took about an hour and fifteen minutes to get there. We were so lucky to have Heather with us as she had spent a semester at the University of Oxford some years ago. She was able to plan some activities for us during the day and was able to guide us around the city which was helpful in terms of time management. Normally I do quite a bit of research before going to a town I have never been to before but this time I was able to rely on Heather.

Once in Oxford we decided to head over to the covered market where we had some giant cookies from Ben’s Cookies – they were delicious! We also had some coffee before deciding that we wanted to do “The Original Famous 2 Hour Free Walking Tour” (where you can choose to donate to your tour guide at the end of the tour). Our tour guide was a current medical student of one of the colleges of Oxford University and was really enthusiastic and knowledgeable. We were able to see the Martyrs Memorial, Trinity College, the Sheldonian Theatre, the Bodleian Library, the Radcliffe Camera (my favorite building), Codrington Library, All Souls College, University Church of St Mary the Virgin, Brasenose College, Merton College, Christ Church Hertford Bridge, among other things we passed by. Our guide was able to tell us the history of a lot of the buildings and some stories about the different rivalries or traditions attached to the different colleges. 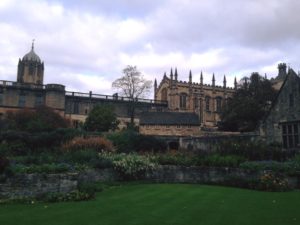 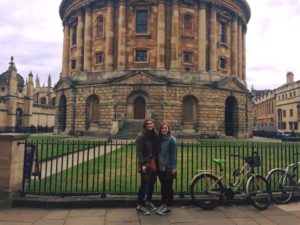 After the tour we were all quite hungry and decided to eat at the Eagle & Child pub where Tolkien and Lewis used to meet with fellow colleagues to have discussion groups. We were able to walk around town at sunset and enjoy more of the amazing architecture and design. Just before its closing, we were able to check out the Museum of the History of Science where we were able to see some amazing scientific instruments as well as a blackboard that has some of Einstein’s calculations on it. We also stopped into the Blackwell Bookshop which has to be the largest bookshop I’ve ever been to. They even have a section where they display original editions of some famous books. 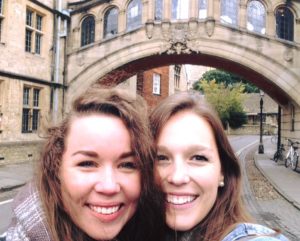 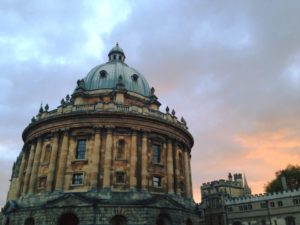 We finally ended the day with some hot chocolate in ice cream at this funky little parlor named George & Danver. We chatted and warmed up before our final stroll back to the coach for 8pm. I don’t really know how to properly describe the atmosphere in this city but I can say that I’ve fallen in love with Oxford. I have not traveled to many different places yet as I have mentioned before, but this day trip has truly sparked my excitement to keep discovering more of England and of the world. I highly recommend taking the time to visit. 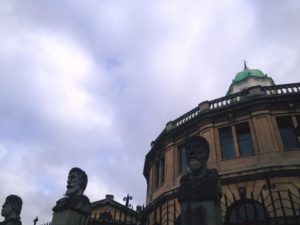 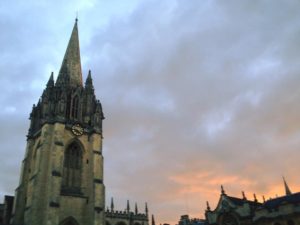