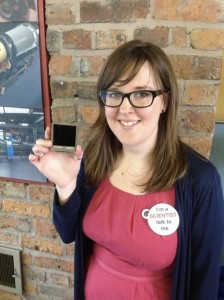 International Womens Day was on 8th March, and I was involved in two outreach events aimed to promote women in science.

The first was Girls Allowed, an event at Brunel University to encourage female GCSE and A level students to continue studying physics. It was attended by just shy of 50 girls from local schools, where they heard about the physics from the CMS collaboration from CERN, general particle physics and about the detectors used in those experiments. In the afternoon, groups of girls were invited to design a detector system for a particular experiment at CERN and present it to the ‘funding council’, where the best project received a grant of chocolate! In the afternoon, the girls heard about what it’s like to be a female physicist from myself and two laser physicists. I talked about basic nuclear physics and how it’s possible to look at the structure of the nucleus by using experiments. I described what I do day to day as a research physicist, and all the places that I’ve been lucky enough to travel to. It was a great event to be involved with, and certainly made me think about how to explain my research in a way that GCSE students can relate to, and hopefully be excited by.

The second event was run by Science Grrl at MOSI, the Museum of Science and Industry in Manchester. The photo above shows me at MOSI, with a charged particle detector, made from silicon (photo: MOSI). I found out about Science Grrl through their Twitter, and I’m so excited to 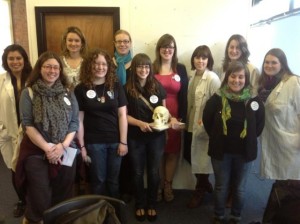 be involved with a positive organisation that wants to promote science for everybody. At MOSI, a small army of female scientists (ranging from archeologists and palaeontologists to chemists and applied mathematicians) were set free to wander round the museum and invite the public to guess what kind of scientist they are, based on the props they had with them. The photo to the left shows the Science Grrls, ready for action! (photo: MOSI). Every so often, a Science Grrl would stand on a soapbox and shout out about the science that they do. I talked about how elements are made inside stars, and the excitement on two young girls’ faces really was a joy to behold! MOSI is a fantastic museum, and I found myself spending much of my day in the Power House, which is full of working steam engines. It was a wonderful day to spend talking to people about the kind of research that I do, and especially talking children about how exciting science is!

Posted on
March 15, 2013
Posted by
Guest
Posted in
General, Life in the Department