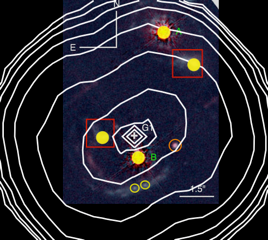 Since its discovery by the Swiss astronomer Fritz Zwicky in the 1930’s, dark matter has continued to capture the public imagination. It raises the velocity of stars and gas in galaxies, bends light around massive galaxy clusters and promotes the growth of structure in the Universe. Recent results from the “bullet cluster” suggest that dark matter is most likely some new particle of nature rather than modified gravity, but exactly what it is remains a mystery. If it is a new particle, then billions of these will flow through your head by the time you finish reading this blog (without effect thankfully). This is such a striking thought that it has already inspired many artists and writers, from Cornelia Parker’s famous “Cold Dark Matter” sculpture to Philip Pullman’s “His Dark Materials”.

Together with Prof. Mark Gieles, I am currently building a new astrophysics group here at the University of Surrey, with a focus on computational astrophysics and dynamics. My key science goal is to answer the question: “what is dark matter?” My approach: to construct actual images of the dark matter distribution in the Universe by measuring its gravitational influence. Comparing these images with state of the art numerical simulations (that assume something about the nature of dark matter), I can then rule out dark matter candidates, honing in on what dark matter actually is. So far, it seems that dark matter is a very cold “collisionless” fluid – perfectly consistent with some new particle that lies beyond the standard model of particle physics. But there is still plenty of room for other more exotic theories that rely on new physics like extra spatial dimensions.

All in all, it is a very exciting time for the field. In the next five years, our theoretical models will become significantly more accurate as computers increase in power. The Gaia satellite – due to launch this year – will measure the positions and velocities of a billion stars in our Galaxy, allowing us to accurately measure the dark matter distribution through the Milky Way for the first time. And there is a very real prospect that we will detect a dark matter particle – either in experiments deep underground, or by creating some at the Large Hadron Collider in Cern. On this last point, it is interesting to make comparisons with another elusive particle – the neutrino. First invented by Wolfgang Pauli in the 1930’s to explain missing mass and momentum in radioactive beta decay, Pauli said of the particle: “I have done a terrible thing, I have postulated a particle that cannot be detected.” Some thirty years later, Reines and Cowan proved Pauli wrong by detecting neutrinos coming from a nearby nuclear reactor. Today, we have entered the realm of neutrino astronomy, using them as a new window onto the cosmos. Perhaps nature will be kind and allow us to do the same with dark matter in the near future.

Posted on
May 15, 2013
Posted by
Guest
Posted in
Interesting Physics, Life in the Department

How much should you make from saving a human life?