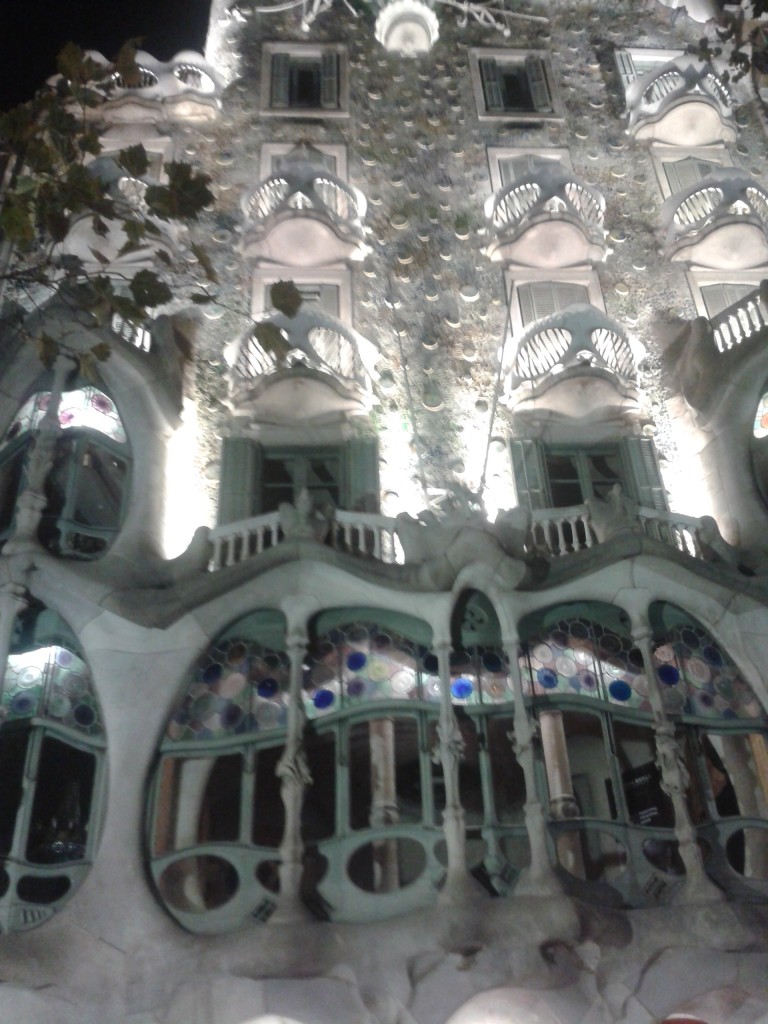 I am currently attending a conference, the 7th International Discussion Meeting on Relaxations in Complex Systems, in Barcelona, Spain. My commute to the venue from my hotel in the morning takes my past the Gaudi designed Casa Batlló. I also passed it last night on my way home from a great tapas bar: (Quimet & Quimet. My friends and fellow scientists, and I, had enjoyed tapas with, amongst other things: sea urchin, clams, cod fish liver, caviar, squid, spanish cheeses, anchovies and sardines, … I took the picture of the Casa Batlló above last night on my way home.

I have also listened to some very thought provoking talks. A lot of them are quite esoteric. Some, e.g., the ones on dynamics in 4,5, and up to 8 dimensions, are arguably very esoteric. But one throwaway remark by one speaker tickled me. It is about the speed of shear wave propagation in human flesh.

In layman’s terms, if you kick someone, on say their left buttock, then I guess the primary effect is to initiate a compression wave propagating through the person, and starting at the point of impact of your foot. A compression wave is just a sound wave really, and sound propagates in human flesh at about the same speed as in water. This is quite fast, at around 1500 m/s, which is rather faster than in air (about 300 m/s).

However, if you grab their left buttock and oscillate it back and fore, then this parallel or side-to-side motion is what is known in the trade (of soft matter physics) as a shear wave. This moves maybe hundreds of times slower, at only a few metres per second.

When people say the flesh is weak, this is probably not what they mean, but the slow speed is due to the stuff of which we are made of (except for our bones and teeth) being pretty soft, in the above sense. I.e., flesh is easily deformable in some ways, for example by shear, which is a technical word basically meaning side-to-side motion.

Anyway, despite the rather tough (8:30 am, to 7:30 or 8:00pm) schedule, I’m really enjoying the meeting. I should, however, quit writing blog posts and finish my talk for tomorrow.

Posted on
July 23, 2013
Posted by
Richard Sear
Posted in
Interesting Physics, Life in the Department

Chaos is a friend of mine