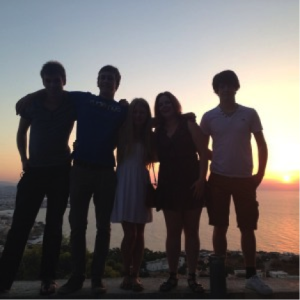 Last month, I went to Crete with four friends, but unlike many students, we weren’t heading to the party centre of Malia. Instead, we flew to Chania, on the other side of the island, for an Erasmus summer school on Spintronics and its applications.

Spintronics is an emerging field which uses the intrinsic spin of the electron (and its associated magnetic moment) in applications such as Quantum Computation, which aims to drastically increase our computer processing speeds in the future by utilising quantum superposition. This is important when you consider Moore’s law, which leads to the idea that processors double in speed every two years, is reaching its limit as we come to the maximum number of transistors we can practically fit on a piece of silicon.

Quantum computers use spin states to encode data, and superpositions enable more data to be recorded. Put simply, there are two spin states that an electron can hold, that is, spin up or spin down, but thanks to the superposition principle, there are more than just two ways to store information.

Let’s imagine a set of twins who only have two pairs of trousers between them; one high-waisted pair comes from the wardrobe of Simon Cowell and the other is a pair of low-rider jeans from any rapper you’d care to mention. Now, one of the twins must wear the Simon Cowell “up” trousers, and the other must wear the rapper’s “down” trousers. However, in the morning, before they come down from their room for breakfast, nobody knows which twin will be wearing which set of trousers, so they are in a superposition of states. There’s a probability that twin A will be wearing the “up” trousers but there’s also a chance that twin B will be wearing the “up” trousers and the same for the “down” trousers. We only know which trousers the twins are wearing when they are observed at breakfast!

(I must thank another Surrey undergraduate; Adam Spindler, for help with the analogy there… check out his science videos on YouTube!)

However, it wasn’t all work and no play at the summer school. We had a unique opportunity to mix with students from Germany, Poland, Cyprus, Turkey and Greece and to sample some of the unique Cretan culture; from delicious Dakos to lively local dances. We visited the city of Chania with its historical Venetian harbour and many of the students chose to hike through the picturesque Samaria Gorge. Of course, we did spend a little time on the beautiful beaches of Crete between lectures too!

Posted on
August 29, 2013
Posted by
Guest
Posted in
Interesting Physics, Life in the Department

Why don’t all whales have cancer?