A Conference Report from ‘Behind the Lines: Gender in the Bunker of International Security and Defence?’, University of Surrey, 11th September 2013.

On 11th September 2013 postgraduate students from across the UK (and beyond) descended on the School of Politics, University of Surrey to present papers and to debate issues relating to gender and security. The conference was made possible with the support of BISA-PGN funding.

When Adele Stanislaus, Annie Waqar and I sat down last year to put together out proposal for the BISAPGN conference funding, we quickly found inspiration. Gender was just not high enough up the agenda for postgraduates engaged in research on security. Despite the burgeoning group of scholars loosely grouped under Feminist Security Studies, we did not know of a UK based event which had brought together the emerging generation of postgraduates examining the issue. Our aim from the outset was to highlight the importance of gender to our understanding of security and to create a network of emerging gender and security scholars.

Dr Claire Duncanson opened the conference with a plenary on ‘Regendering the Military; Regendering Security’, raising a question which underpinned the whole conference: ‘how do we achieve feminist visions of peace and security?’, particularly in relation to military and security institutions.

The papers presented represented the diverse nature of the research on gender and security and was reflective of the emerging group of postgraduate and early career researchers engaged in research falling under Feminist Security Studies. This included papers addressing the role of forced wives in fighting groups, the intersection of gender and disability in the Turkish armed forces to the place of UN Security Council Resolution 1325 on women, peace and security in the Aceh conflict. Along with an interesting paper from our Surrey Politics PhD colleague Ciaran Gillespie addressing ‘Of Malala & Malalai: Interpretation of Emancipation in the ‘War on Terror’. A full list of papers and abstracts can be found here.

Professor David Galbreath (@EuroSecEditor), Editor of European Security addressed postgraduate concerns on the publishing process, answering questions on how to go about getting published. It was refreshing to hear a realistic account of the process, which acknowledged that being rejected was part of the process for Professors as well as PhD students!

In the parallel reality of social media the conference also acted as the catalyst for lots of debate, comment and interaction. The tweets have been collated via Storify and can be viewed here.

Is gender in the bunker of international security and defence? The papers, keynotes and the interaction and debate they sparked at the conference and on social media certainly suggest not! In bringing together a community of emerging scholars engaged in research on gender and security, we demonstrated that Feminist Security Studies has the potential to make even more of an impact on our understanding of security. Watch this space.. 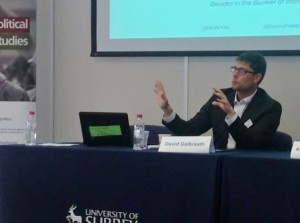 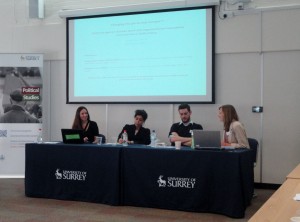 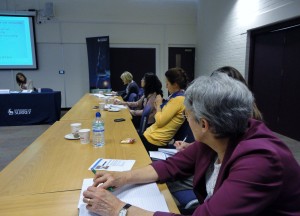 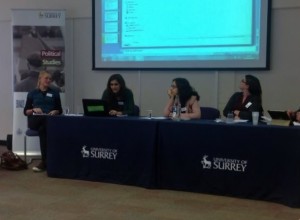 Briefing for the Headmistress