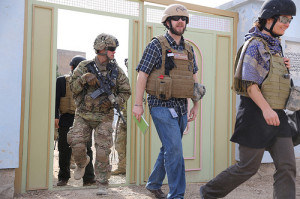 The Swedish Defence Research Agency has just released a ‘Review of the Practical Implications of UNSCR 1325 for the Conduct of NATO-led Operations and Missions’. NATO’s implementation of UNSCR 1325 on women, peace and security is the subject of my research, so understandably this report interested me but so did the NATO response to it.

While the NATO acknowledgement that the report gave a ‘mixed review’ and that there is ‘ample room for improvement’ is welcome, the press release inevitably had a number of caveats.

NATO Assistant Secretary General for Operations Stephen Evans adds the caveat that NATO’s “role should be limited to advancing gender and the UNSCR 1325 agenda in the security sector. Outside of that, others in the international community are better placed to make the running.”

However, NATO operations are complex (and becoming increasingly so) and inevitabley involve the interaction of sectors not directly linked to security.

This resonated with Professor Gill Allwood’s comments at this week’s Jean Monnet @ CRonEM roundtable on Gender Politics in the EU. Allwood stated that “gender is about EVERYTHING”. Gill’s research looks at gender mainstreaming and EU external policy: on migration, development and climate change. She found that although these areas have significant overlap the EU policy on integrating gender is not consistent across them.

Practically it is difficult to fathom how gender mainstreaming could be isolated to purely ‘security’ concerns given the large umbrella of issues that security covers and the difficulty of defining something purely as a security issue. There is a very real danger that this could become a convenient excuse for NATO when they do not live up to their commitments to gender mainstreaming under UNSCR 1325.

We wait to see how NATO’s implementation of UNSCR 1325 will play out but caution should be shown to how and what we define as a ‘security issue’. For gender mainstreaming to be effective it must be more than a ‘tick box exercise’ but a commitment to a gendered transformation.

When is now for eurosceptics?