Despite the usual embarrassment of riches that I could cover, today I’m going to build on some of the thoughts that I discussed some weeks ago, regarding the LibDem’s strategy for the European Parliament elections.

During the past weeks, we’ve seen Nick Clegg offer – and Nigel Farage accept – to have a public debate on things European, which will have two parts: a radio debate on LBC in 26 March and a BBC TV debate on 2 April.

As I discussed in my other post, the logic behind this is fairly simple.

For the LibDems, this is a chance to highlight their pro-EU stance, which does still have some traction with the wider electorate (still some quarter to a third of people say that EU membership is a ‘good thing’, according to Eurobarometer, despite all the negative coverage the EU gets). Moreover, by opening to offer only to UKIP, Clegg avoids diluting his message with the presence of Cameron or Milliband and – he hopes – speak to the middle-ground of the electorate, presumably by painting Farage as a marginal figure. 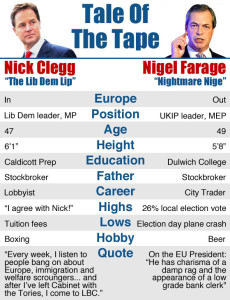 For UKIP, the debate is a way to mark their progress as a serious party and helps their on-going case to secure a spot in any leaders’ debate in the 2015 general election (and so mimic the ‘Cleggmania‘ effect seen in 2010). Their mere presence confers some respectability on their position and they will hope that Farage’s common-sensical approach will been seen by new portions of the electorate. Again, the absence of Tory and Labour leaders will give them an opportunity to appeal to the middle ground, by positioning Clegg as out-of-touch.

Similarly, the dangers for both sides as also clear. In a two-up debate, commentators will look for a winner and a loser, so there are downside risks. The LibDems will know that pro-Europeanism isn’t a very popular position to espouse these days, especially since they also would like some reform of the EU (which becomes a more difficult position to articulate). UKIP risk being exposed more publicly for any of their organisational and policy-based difficulties.

Probably the only people to be fairly sure about coming out of this well are LBC and the BBC, for whom the debates will represent a key focus on election coverage and which set them up nicely for the rolling discussions about 2015.

However, stepping back from the debates, we might usefully ask ourselves what impact this will have on the wider debate on the EU in the UK.

Yesterday, the Finnish foreign minister (and former academic), Alex Stubb, made a very thoughtful speech about Britain and the UK. In it, he highlighted a recurrent theme of observers of the British debate, namely that while it is vociferous, it is also often uninformed. While the latest Eurobarometer doesn’t place the UK at the bottom of the scale for knowledge – that belongs to the French – it does leave them very close to it. As I have written here before, there is very often much more heat than light.

The Clegg/Farage debate does offer a rare opportunity to start addressing this, by focusing on the EU and European integration. However, even with the best will in the world, two short, confrontational debates will not undo the years of neglect that the subject has suffered. Indeed, I would expect the debates to open up more questions than they resolve. The concern is that the media, politicians and other commentators will not use this as an opportunity to get people talking more expansively and thoughtfully about the EU and start working on putting us in a more informed position to make the potentially highly-consequential decisions that will revolve around the next general election.

My suspicion is that the debates will burn brightly, but briefly, and that voters will simply take them as substitutes for further reflection. If that’s not to happen, then it’s not only teams Clegg and Farage who need to be preparing for these debates.

Labour, Europe and the continuing absence of British EU policy