Defence Secretary Phillip Hammond’s announcement that the government was likely to remove restrictions on women serving in combat should come as no surprise.

As he points out the ‘Americans, French, Australians, Canadians and Israelis have women in combat roles’. And the position of women in the armed forces has long preoccupied NATO members, with the Committee on Women in the NATO Forces (CWINF) officially recognised in 1976.

Yet consideration of the status of women in the armed forces of allies has not influenced the UK position before.

Four years ago a report by the MOD found that although women were capable of serving in combat, allowing women to serve on the front line would have a negative effect on team cohesion. This leads us to ask just what has changed since 2010 which would allow women to serve in combat roles without threatening the cohesion, effectiveness and security of the unit?

The answer is of course nothing tangible. The gender roles the military and militarism rely upon remain unchallenged.

BUT the narrative has changed. No longer are we considering that ALL women in the military will by extension be eligible for combat roles.

These are not women who will serve in combat, rather they are ‘elite women’, ‘exceptional women’ and will comprise only a ‘tiny percentage’. 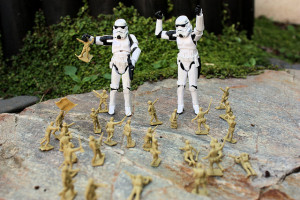 They are something different. They are in essence ‘ungendered’ because they are presented as something outside of the gender constructions that underpin the military. The criteria as Hammond argues should now be ‘physical fitness, not gender’.

The difficulty many (both inside and outside the military) have in envisaging women on the front line is circumnavigated. There is no longer a challenge to the idea of war as ‘just warriors’ fighting to protect ‘beautiful souls’ (Elshtain, 1987) because it is no longer the ‘beautiful souls’ we are considering integrating into combat positions.

Posted on
May 9, 2014
Posted by
Katharine A. M. Wright
Posted in
Peace and Security, Women
Tagged
Armed forces, Gender, Military, Women in UK armed forces, Women on the frontline