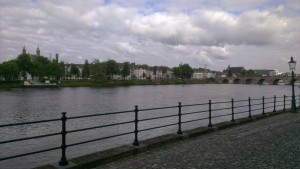 I’m visiting the University of Maastricht this week, using the EU’s ERASMUS+ teaching exchange programme. It’s a great means of seeing how other institutions work, and of sharing practice with others, but it’s not so well known: if it hadn’t been for a chance email that dropped in my inbox last summer, I’d not have been able to get this first-hand experience.

Maastricht is obviously deeply ingrained in minds of those who study the European Union, as the location of the European Council in 1991 that agreed the eponymous treaty that created the European Union. Both city and university remain proud of this piece of history, seen most recently in their joint hosting of the first European Parliament lead candidate debate last month.

Part of my activities has been discussion of euroscepticism and I was very excited to be invited to a roundtable with Dutch candidates for the EP this week to discuss the matter further.

In that debate, and more generally in discussions, it has been interesting for me to consider how European integration has (and has not)  lived up to the ideas that informed the Maastricht treaty.

At one level, the hubris of Maastricht has gone. The talk of ‘the hour of Europe’ and the creation of new structures with grand names was largely crushed by the Balkan wars and the painfully protracted ratification of the treaty. Since then, the floundering of the Constitutional Treaty and the eurozone crisis have only served to underline the limits to a process that seemed to be both progressive and achievable at the time.

At another level, though, the dreams remain. Maastricht was always as much about pragmatism as it was about ideals. Much of the pillar system was formalisation of existing practice, dressed up to look more substantial than it was: hence the long debates in the 1990s about capability-expectation gaps. The resilience of that system to all the challenges it faced has been borne out of the fundamental need that member states have felt for cooperation and coordinated action.

Even if that does still remain the case – and it’s something that even sceptics acknowledge is required in a non-EU Europe – there is still a sense that things are not working as they should.

This week has been instructive for me, in reminding me that critical views on the EU are not solely a British condition: Dutch critiques might be coming from a different place – as a eurozone insider, most obviously – but they still speak to similar issues: the protection of of Dutch interests, the consequences of free movement (especially in a border region like Limburg), the failure of the Union to manage the crisis better.

As I’ve discussed here, the view I’ve shared with people here is that critical voices need to be acknowledged and debated with, if the EU is to survive in the longer-term. The caesura of the 2005 referendum defeat here has left a long shadow: as one audience member noted at the roundtable, “we were told the world would end if we voted ‘no’, but it didn’t”, and the exposure of the emptiness of such threats has made it all the more difficult to win popular support. To pretend that the only way to work is in the EU is misleading and ultimately counter-productive.

Instead, we need to appeal to the idea that the EU is the structure we have and that we can do better by working together to develop and evolve that structure into something that better fits our needs.  How much change is needed and what sort of change is a moot point, but if we can accept that the Union is only ever a function of what states and peoples want of it, then we can perhaps escape from the trap of thinking that it is entirely self-serving.

Ultimately, the lesson I’m taking from my time in this beautiful city is that Maastricht (the treaty) still matters, because it brought the EU out into the public eye. That was not always a pretty process, but it was an essential one in allowing it to perform useful functions for all involved. If people do not take the opportunity to shape the Union, then none of us is going to come out of it well.

I love the smell of democracy in the morning…