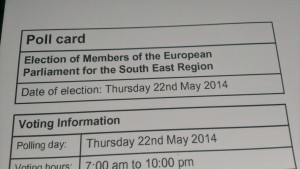 Pretty amazing, when you think about it

It’s voting day here in the UK, so I’m off to the polling station to exercise my democratic rights.

When I vote, I’ll be choosing who represents me in the world’s only supranational, directly-elected Parliament, a body that speaks for half a billion people.

And because of a decision made some 15 years ago, there’s a very good chance my vote will result in someone from the party I select being returned.

All in all, that’s pretty impressive. Especially for a collection of states that were in a hot war with each other 70 years ago and a cold one 25 years ago.

But I’m also a realist about such things.

I know that even though the Parliament I’m voting for is one of the largest in the world, with 751 members, that’s still a lot of citizens each one represents, so my weight as an individual doesn’t mean a huge amount.

I know that representatives from the party I vote for will have to find allies in the Parliament, and that might mean compromises on some things.

I also know that because this Parliament doesn’t get a final say in legislation – but has to agree jointly with another body representing member states – my representative might not always get to do what they promised they would.

And I know that the system isn’t perfect; in some cases, by a long shot.

But still I have a voice.

In a world where the consumer is king and we can satisfy our desires almost instantaneously, it’s easy to think that our political life should be the same.

But that’s to miss the point of a democratic system.

Democracy starts with individuals, but recognises that they are part of a group of people (somethings a very big group) trying to find mutually acceptable ways of living together.

Democracy can be infuriating, because we don’t always get what we want. But it is still better than a system where others take decisions for us, without control, transparency or accountability.

And because it’s a democracy, if we don’t like it, then we can change it, improve it.

So when you feel like throwing your hands up in the air, or calling down a curse on politicians, just remember that ultimately it all rests on us. As individuals. As citizens. As voters.

You have a voice. You have a vote. Use both and we can continue a debate that has brought us into an era of peace, stability and prosperity that would have been unthinkable for most of human history.

Power and the European Parliament