In this week’s POL1012 Introduction to Politics: Power and the State seminars, on Rational Choice theory, I ran a prisoner’s dilemma game with the students. This is something I have done for several years now but this time I wanted to make a record of what happened. Students were told that they had been arrested for a crime along with their accomplice and could not communicate with this partner in crime.

In each of the three seminar groups we played 2 rounds of the game. For the first round I gave them a name of the same celebrity (I settled on Kim Kardashian as someone they MUST have heard of) on a piece of paper. I told them that they were not allowed to show the name they had to anyone else in the class and that if they had their own name to let me know. I wanted to give them the impression that they did not all have the same name and that someone could have their name. 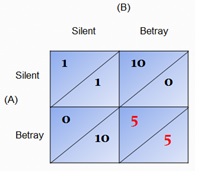 After the first round I tallied up on the board who had betrayed/stayed silent and asked each student to justify their reasoning.

The second round saw the students given a name of a classmate, someone among the 12 or so students in the class that day.

Some students spoke about how their conscience would not let them betray their partner, that they had been brought up not to “rat out” someone else or that the their partner in crime  was a friend they trusted. For the first round some made an assumption that the celebrity could not be trusted because of their money, while some classmates felt this was why they could be trusted. Others were resolutely rational and said that they would not risk 10 years in prison and 5 years was clearly the most rational decision to make.

For the last two groups, those who took a risk on a longer sentence and acted ‘irrationality’ were rewarded. However, for the first group this was not the case and those who played it safe and acted ‘rationally’ were rewarded. This set the groups up for an interesting discussion on the merits of Rational Choice theory and one in which I think they felt invested – especially given that many of their peers had just betrayed them! 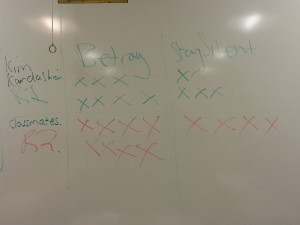 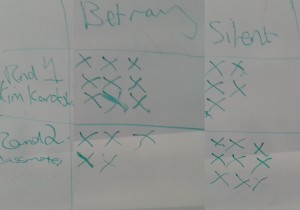 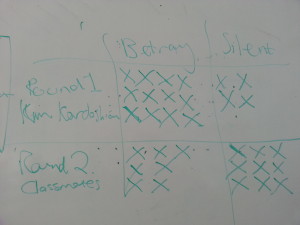 Stock-taking on Britain and the EU

The national interest and what’s in the interest of the nation: Confusion in the European system