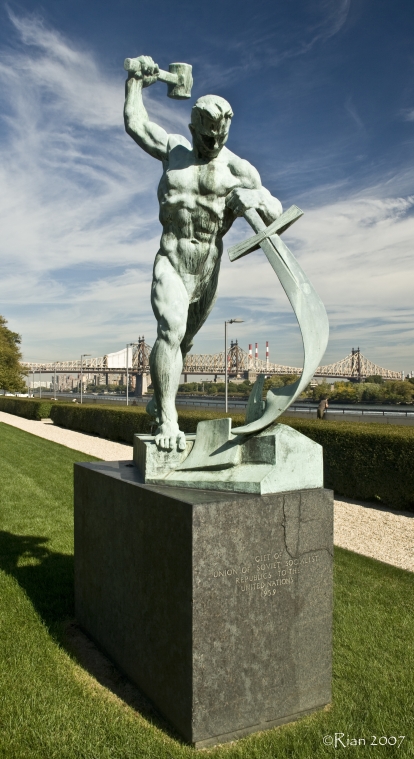 People live hopefully. They dream of how their lives can be, and work towards realising those dreams. It’s one of the reasons that so many religions talk about how things will be: thus the Bible talks of turning ‘swords into ploughshares’, as ‘national shall not lift up sword against nation, neither shall they learn war many more.’

There is, however, a problem: other people. Even if we set out with good intentions and good actions, then we encounter others who upset our plans, either intentionally or accidentally. And lest you think that ‘other people’ doesn’t mean you, remember that you are ‘other people’ to other people.

Trust is a fundamental part of our political lives, whether we are looking at the international system, or representative democracy, or even at the level of interpersonal relations. If we cannot trust someone, how can we be willing to give them power over us? And in national political systems where we can only even know a tiny fraction of the millions of other people personally, how we can have trust, except through a willingness to accept that the structures of political governance will maintain the appropriate balance?

The difficulty with this is that trust is something that seems to become weaker over time, rather than stronger. The causes are much-debated, but we might point to a number of potential sources.

Firstly, it is important to recognise that the values of the political system do not match well with thos
e of the economic and social system. In an age where you can get exactly the consumer products that you want, people start to ask why they can’t get exactly the public policies they want too. The tension here lies between the fundamentally different assumptions that underpin the different systems. Market economics depend on difference: each of us has something we can sell to someone else and only because of our differences can that work. Democracies acknowledge we are all different, but assume that we are all equal: one person, one vote. Precisely because we can’t reasonable allocate different political weights to different individuals, we say everyone has the same rights and the same obligations, with few exceptions (e.g the young).

Secondly, in the post-Cold War era, the broad outlines of how society should organise are generally well-agreed: liberal democracy, free market economics, a welfare state. Yes, other systems exist, but none with the same proselyting mission that classical Communism had. As such, politics has experienced a turn into managerialism: tinkering at the edges, changing emphases, focusing on the presentation rather than the substance. The stakes appear rather reduced.

Thirdly, much modern governance is highly technical. The days when an interested individual could grasp most of the detail of what is being debated in a polity are long gone and the rise of ever-more complex technologies and processes creates barriers to understanding. The technocratic pressure this creates further distances people from the system of governance.

Finally, the strengthening of international, supranational and global levels of politics and economics also has had the effect of disempowering people. The creation of complex systems, run by no one, heading in directions that cannot be easily controlled, makes people ask what they can possibly do to regain control.

All of these forces come together to undermine the trust we have in each other and in the political system, broadly understood.

It manifests itself in a decline in turnout, across the world, in elections. It’s seen in the decline in participation in civil society organisations – political parties, societies, churches. The privatisation of our social lives – the shift from going to the cinema to watching TV – is both cause and effect of the challenge to social interaction and engagement.

And this matters, because if democratic systems rely on one thing above all else, then it is participation. Rule of/by/for the people doesn’t work if the people say they don’t care. Elected representatives need people to elect them, just as those electing need to have a meaningful choice of candidates to choose from.

And this is the heart of the matter.

We are all politicians, whether we realise it or not.

In a democratic system, it is the people who hold the reins of power, which they achieve through their actions and the choices. If you don’t like what you see happening, then it is in your hands to change that.

That’s not the same as saying that you can always get what you want. Instead, it’s saying that you have both a right and a duty to talk and work with others to find new, better solutions to your situation. That means give and take and it means compromise. Without compromise, we cannot reach consensus; without consensus, we cannot have a stable and enduring foundation for our common enterprise. This is something that we see encapsulated in the Golden Rule: do unto others as you would have them do unto you.

Ultimately, if we want the society that we dream of, then we have to build it ourselves: it isn’t something that can be outsourced to others. It’s not easy and it’s not without difficulties, but if we don’t try then we will certainly fail. Whatever the pressures that confront us, we have to remember that a little trust can go a long way.

This is a version of a talk given at Guildford Cathedral on 20 November, as part of their series of discussions on ‘The Peaceable Kingdom’. Many thanks to Julie Gittoes & Andrew Bishop for the invitation to speak and for the very warm welcome.

Does UKIP have the brains, bodies and legs to prosper?