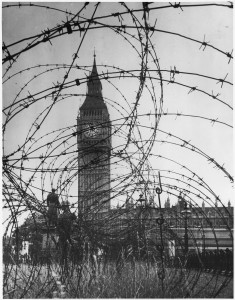 One of the recurring themes in talks I give about the EU is the notion of entanglement: the idea that ‘Europe’ is not some distant agency, doing things to us, but rather IS us (at least in part) and that we are caught up in it, whatever we feel about it.

A couple of stories recently have reminded me of this idea.

The big story is the on-going Eurozone crisis and particularly Greece’s position therein. Much of the rhetoric (outside Greece, obviously) is that the failings of that country are their own doing and that they must simply cleave to the EU’s will. The depth and pain of the austerity that requires are unfortunate but necessary, in that view. Obviously, seen from the other end, such an approach is (literally) insufferable and doesn’t accord with the various alternative paths that local politicians have sought to lay out. In short, the Greeks largely think about Greece, while the Eurozone largely thinks about the Eurozone.

But this is to miss the next layer of analysis, namely the entanglement. Greece matters to the Eurozone, because the outcome of the Greek case will set the stage for whatever comes next. Most obviously, if Greece is forced out of the Euro, then other countries will certainly follow: the ERM experience of the early 1990s all over again, but immeasurably more painful and difficult. Thus, regardless of whose ‘fault’ Greece’s situation is, it is now everyone’s problem.

And that includes non-Eurozone members, including the UK. A collapse of the Euro would trigger widespread economic destabilisation and severely compromise the UK’s economic recovery. This is why the Treasury continues to work very closely with the Commission and ECB in their work, even if at a political level it is not much discussed.

The second story that brought this to mind was the recent dismissal of UKIP’s Janice Atkinson for alleged fraud. Atkinson – MEP and (until this week) parliamentary candidate in one of the party’s target seats – had been found getting her assistant to ask for inflated receipts for an event, on the grounds that the money was coming from the EU and they wanted to ‘repatriate’ that money to help fight membership.

At one level, this is consistent with the party’s line about using the EU’s resources against it: hence the claiming of MEP salaries, but without contributing much to the European Parliament.

However, the owner of the restaurant had spotted the flaw in the assistant’s logic and then dropped them in it. That flaw was that the money might be coming from the EU (via funding for pan-European political parties), but the EU gets its money from national taxpayers, including himself. The EU doesn’t generate its own income, but recycles it from national coffers.

This point is one that is often neglected when talking about the EU’s funding: it’s seen as a black hole, into which is poured a vast amount, with nothing to show for it. Certainly, €100b+ isn’t insignificant, but the structure of payments (primarily to infrastructure development and farmers) is not so easily seen, since most people aren’t getting a payment directly back.

Why does any of this matter? Two key points strike me here.

The first is that levels of knowledge about the EU system remain low: my biggest surprise about the Atkinson story is that the restaurant owner thought to link the money in the way he did. Without an appreciation of the deep involvement of member states in all stages of EU decision-making, funding and constitutionalisation, there will remain a block on effective operation and reform in the system.

The second is the logical extension of the first, namely that we have much more agency than we might appreciate. Greece might be small and embattled, but also can call upon powerful voices and arguments to help it influence and shape its future path: the cost of Greece failing are simply too high for everyone else. Likewise, when people talk about desiring reform of the EU, they need to understand that that is not solely achievable by capturing a national government to forcing policy that way, but also by recognising that their interests are shared horizontally and that effective action can be produced by developing broad coalitions.

David Cameron was much mocked for his claim that ‘we’re all in it together’ back in 2012, but he did have a point: the joy (and the pain) of a democratic system is that we do all have a voice and a vote. If we don’t use it, then we lose our best, most peaceable means of shaping our futures. And that’s something we must never forget.

A Death in the Family: In memory of John Pinder

“I wouldn’t start from here”: The EU’s next steps