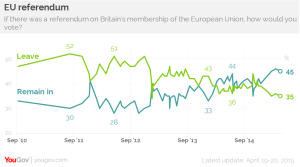 A couple of interesting polls this week help to illustrate UKIP’s situation at the moment.

The first, a YouGov poll on media bias, repeats a survey from last year about how voters see media coverage of the different parties. As last time, UKIP is seen as having a much more negative bias against it than do the Tories, Labour or LibDems.

The breakdown of data shows that all four parties’ supporters are more likely to consider coverage to be biased against their own party, but this effect is very much the strongest for UKIP, with 83% of UKIP voters holding this view (the LibDems are next at 53%). This would appear to tie in with arguments about UKIP voters comprising those who feel rejected by the political system and seen themselves as political outsiders. As a means of mobilising voters, the party’s constant appeals against media bias would appear to resonate well.

At the same time, it is also striking that LibDems are the next most pessimistic about the media, which might also reflect their marginality (or perhaps marginalisation): it’s only the big two parties that seem to be broadly comfortable with how things are.

Also worth noting is that voters from other parties also think coverage is biased against UKIP, especially among Tory voters (and a bit more stronger in LibDems than Labour ones): as much as those on the left have complained about excessive coverage of the party, that does not seem to have connected with voters’ experiences/perceptions.

While these effects are less marked than a year ago, they do remain a key point of differentiation among the parties and one that is likely to remain a theme of UKIP campaigning for some time to come.

However, the second poll points to a more challenging aspect of UKIP’s approach.

Ipsos-Mori’s major poll on attitudes to immigration does point to widespread dissatisfaction with the government’s handling of immigration policy, just as it does to all the major parties’ approaches. At one level this clearly plays into UKIP’s hands, with its willingness to make the running on this issue.

However, one of the other findings was that there wasn’t a strong link between EU membership and immigration:

“40% say they would like to leave the EU to help control immigration, while 47% say they would not. But it does not seem that EU membership and immigration control is particularly closely joined in people’s minds. 60% of people mention either immigration or the EU as a key issue, but less than half of this group (only 23% of people overall) say that both immigration and the EU are important to them”

This forces us to ask some questions about UKIP’s underlying values. As I’ve discussed before, UKIP has undergone a strong evolution from its origins, but one of the arguments for pushing immigration control as a policy was that it also worked towards securing withdrawal from the EU. Even if that might be the practical effect of supporting UKIP, it does still leave the problem that in a referendum, voters might not be willing to take that cue.

Perhaps this is also a reflection of the generally low level of interest in the EU among the British public: with support for membership continuing to rise, there are real questions to be addressed about how attitudes are formed.

Fings ain’t what they used to be: Changing UKIP

Does anyone care about the UK and the EU?