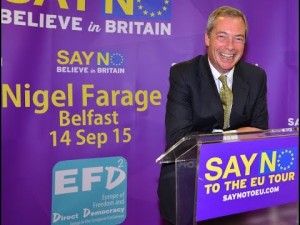 About a month ago, and to some fanfare, Nigel Farage launched a ‘Say no the EU tour‘. The press coverage (e.g. BBC) called it the UKIP referendum campaign, the website talks about why to the leave the EU and Farage himself said that he would be campaigning from now until the vote takes place next year. All as one might expect and something which I only briefly dwelt upon at the time.

However, the tour is now back in the news, following its referral to the European Parliament President by Labour MEP Wes Streeting.

Streeting’s challenge to the tour’s legality is one that I had noted at the time (after discussions with Jo Shaw) , only decide it wasn’t a ‘thing’. But it’s worth revisiting the point again, ifo nly to see how it compares with Schulz’s investigation.

The starting point is that the website, and all the advertising I’ve seen, pointedly doesn’t mention UKIP, but rather the EFDD group of the European Parliament (of which UKIP is a member). The only reason for that to be so would be that the EFDD is funding the tour (and website).

The group has funds from the Parliament, which it can use for only two things (according to the relevant Rules):

Now you might feel that the Tour is covered by the second point, but there is also a specific exclusion for “any form of European, national, regional or local electoral campaign”. There’s even a handy annex that spells out what is allowed and it was here that I came to the conclusion that the money was being used in a permissible way, since it allows “political and information activities in relation to a referendum campaign on a European subject.”

Since the government is clearly committed to a referendum, and is putting through legislation to that effect, and the subject of that referendum is unambiguously about EU membership, that would seem to cover it.

There would seem to be only two possible objections.

The first is that there is still technically no referendum, only a stated desire to hold one. Despite the rather open-ended nature of the tour, it’s likely to be wrapped up before the legislation finally passes Parliament and before the official campaigning period (c. 10 weeks before the vote). Much then turns on the words ‘in relation to’ in the rules.

The second possibility is that the tour is treated as an electoral campaign: as the rules note:

“The electoral nature of an activity or action is determined by the general context of the activity. This means that even if expressions such as ‘candidate’, ‘list’, ‘parties’, ‘vote’ are not directly used, the electoral character may emerge from the direct or indirect purpose and general context of the activity. An activity which is considered partially of an electoral nature will be rejected in its entirety”

This is rather thin as an argument, since the tour is very much more distant from any electoral campaign that UKIP is conducting than it is from the referendum campaign, i.e. if you accept the second element as a problem, then you would have to accept the first one as more of a problem.

What will be of particular interest will be how the European Parliament treats the matter. While it has a clear wish to police its regulations on funding, it also has to weigh up the ramifications of any revoking of funding. UKIP (and other Leavers) would jump on the opportunity to say that the EU was trying to stifle their voice in the campaign (UKIP’s already going for this angle). Moreover, by the time the EP might reach a decision, most of the tour will be done, so any impact would be limited.

At the same time, the EP has a track record on making life difficult for heterodox voices in the hemicycle. The progressive increase in minimum group size over the past decade has been very much a function of more sceptic MEPs being returned. Add to that a core of members who don’t want to engage with those dissonant voices and you wouldn’t be surprised if Schulz decides to take a stand, even if it nominally based on respecting the rules.

Radicals and moderates in the referendum