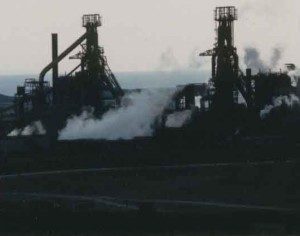 The return from whatever Easter break there might have been marks the opening of the last long phase of the EU referendum: There’s a clear stretch now through to late June, which will split into two parts. The first will be until early May and the local elections, the second through to the vote itself, when little else matters.

And yet, it’s hard not to be struck by the general lack of popular engagement with the issues around the referendum. Yes, I did get a light grilling from my nine-year-old at breakfast about why the government couldn’t just decide on EU membership by themselves, but I offer that as an outlier rather than a marker of most households.

The reasons are reasonably well-rehearsed in this matter. The EU is seen as a complicated issue, knowledge levels are low, there’s a lack of clear cueing from opinion-leaders and – frankly – there seem to be more important things to worry about.

But something interesting is happening here.

The big Easter stories – the steel industry and now the Panama papers – have taken centre-stage in the media. That’s only be expected, both given their nature and the lack of compelling reason to stick with an EU debate that throws up little that is as gripping. But these stories have become embroiled in the referendum debate, especially in the former’s case.

There’s plenty of comment out there about how the EU has condemned steel-making in the UK, or how it has little or nothing to do with the problems of high production costs or Chinese dumping, so I’m not going to spend time on those points. Much more interesting is that such points are being made at all. If anything, the woes of Port Talbot offer a very convenient hook for the way in which people – including journalists – can make the EU membership debate more understandable.

The past week or so have given an opportunity to explain how economic activity is part of a global process and network, in which governmental actors have limited agency to shape what happens. It’s also shown how the EU is not an autonomous actor, but one in which the UK is a partner and influencer. Moreover, it exposes the rarely-explored tension over ‘national interests‘: The UK seems to want to ‘save’ steel-making, but also wants to promote trade liberalisation, which means opposing anti-dumping duties. Two minutes reading the coverage over Tata’s decision will be enough to bring home the point that nations don’t have unifying interests, only competing internal ones.

Which brings us nicely to Panama.

Normally, this would be a gift to the opposition: loads of accusations flying about, little or no sense of how much more will be dredged up from the huge cache of materials, all to a soundtrack of chickens coming home to roost. Just as Port Talbot was catnip for the Labour frontbench, so too the chance to make David Cameron deeply uncomfortable about his family’s tax arrangements.

The first is that in this opening phase of Panama it’s still not clear who else is going to be swept up: as much as the focus has been on Tory politicians, only a fool would imagine that Labour figures are going to come out of this completely spotless. The basic political rule about greenhouses and throwing stones applies heavily here, so caution will apply until more is known.

But it’s the second complication that is most problematic. As much as Jeremy Corbyn might wish to hammer home his critique of David Cameron as an out-of-touch toff, he also knows that pulling the rug out from under the prime minister would also have huge implications for the referendum campaign. Corbyn might not be keen on the EU, but with a party that has been relatively united in support of membership, there has to be at least some calculation of whether bagging Cameron is worth the potential price of Brexit.

And this isn’t just a problem for Corbyn, but everyone participating in the referendum: can it be used to shape the debate?

At the moment, that’s primarily an indirect connection, of the kind outlined above: Someone gets taken out of play by Panama, which then precludes them being part of the referendum (or, at least, taints their message). Even if that doesn’t happen, then the miasma of ‘corruption among the elites’ still hangs around, mainly to Remain’s detriment. In short, it’s like the Parliament expenses scandal all over again.

The connection might get stronger if someone makes a connection between Panama and EU legislation, or with senior EU figures, but as before, we’re still too early to know whether that’s likely.

And of which makes the referendum something of an unusual beast.

Our standard model of EU referendums is that they are ‘second-order’: they are contested on a nominal issue, but are actually shaped and determined by the first order, national political sphere. Thus, today’s Dutch vote is nominally about the EU-Ukraine agreement, but is mostly being fought over questions about political participation and identity within the Netherlands.

The British vote certainly has elements of that: Witness the endless coverage about who might become next Tory leader after the vote. However, the scale of the decision and of its consequences (either way) do seem to be bringing something more substantial to the debate. Recent weeks have seen more and more efforts by media outlets to find more impartial sources of information on the various aspects of European integration and there is an ever-growing number of events being organised to bring people into the conversation.

If the debate to date has been a bit underwhelming then that has been as much a reflection of politicians’ ambivalence as anything else. As we are now seeing, there is some evidence that the pervasive nature of the EU, and the UK’s relationship with it, requires a different kind of discussion. Perhaps the best marker of how far this has gone will come in the next month, as local election campaigning gets going. If we see that been run as an arm of the referendum campaigning – rather than the other way around – then we might have a chance to really make the most of these next few months.