Since our last post, just before Easter, we’ve seen a relatively quiet period in the referendum campaign groups’ Twitter activity. In part, this has been due to the holidays, with many key figures taking a short break before a long summer, but it has also reflected the relative paucity of hooks on which to hang referendum-related stories in the media. Even the potential closure of Port Talbot’s steelworks only achieving a partial take-off with the groups, possibly because it was quite difficult to articulate the relationship with EU membership. 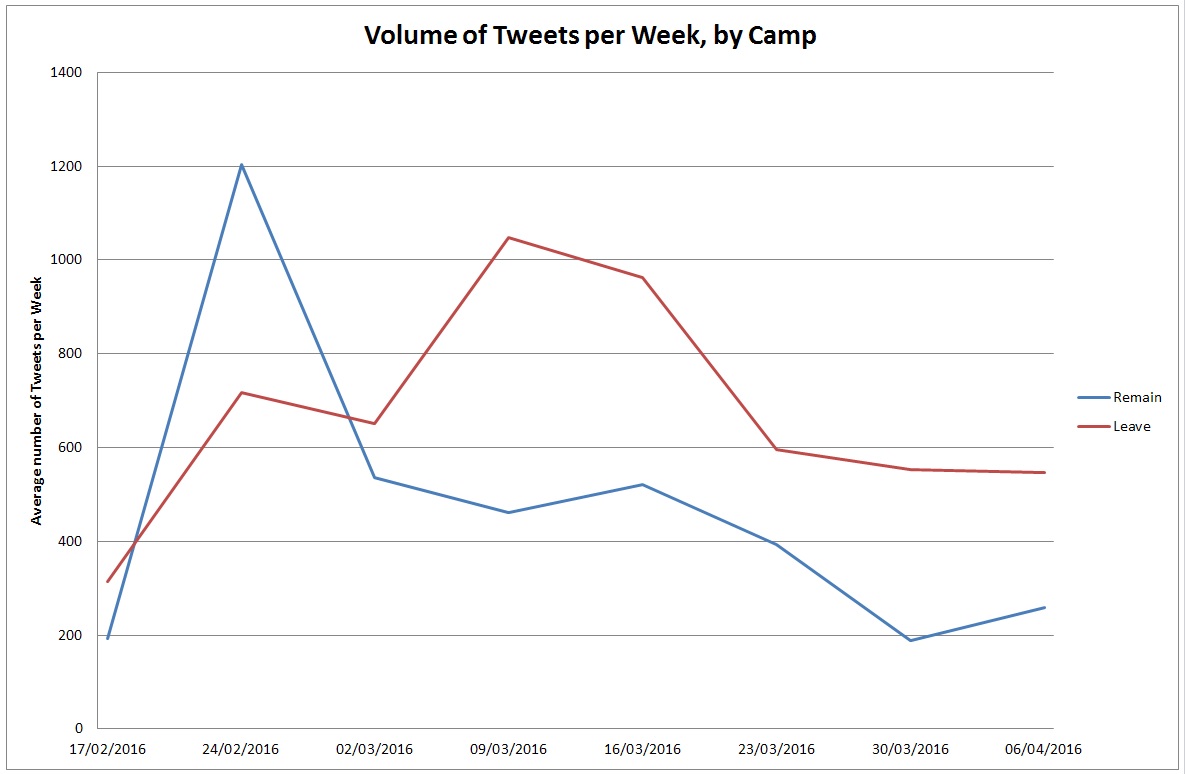 This limited activity has also been reflected in the general slow-down in growth of Twitter followers for all groups. Not since the days of the European Council deal has there been any obvious area of exceptional growth and we would have to imagine that will remain the case until the designation of the official groups later this month. 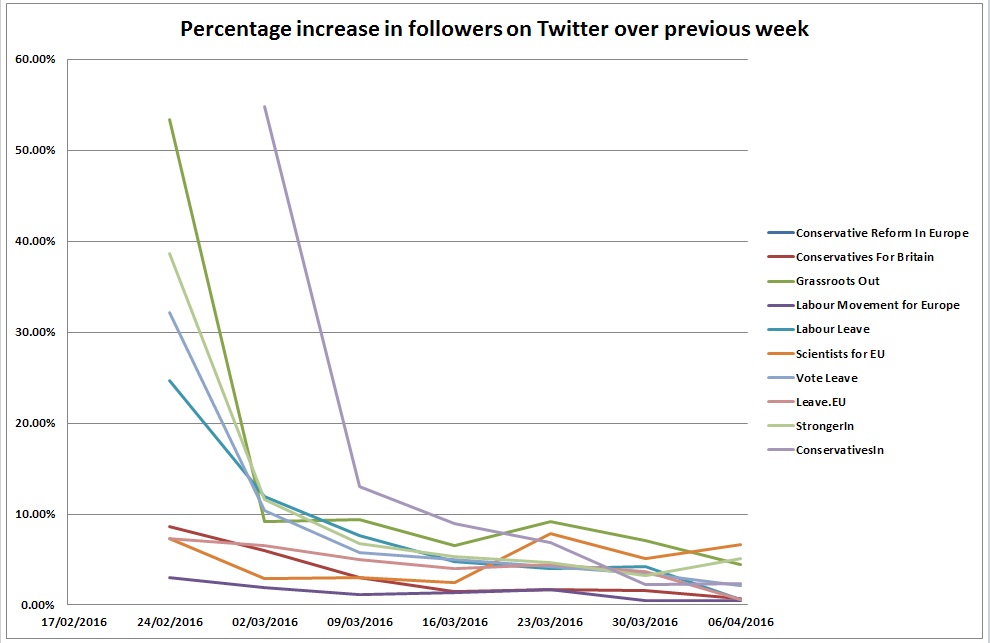 The side-effect of this slow-down is that Leave groups – especially Leave.EU – remain much more popular online, both on Twitter and Facebook, where similar patterns are visible. 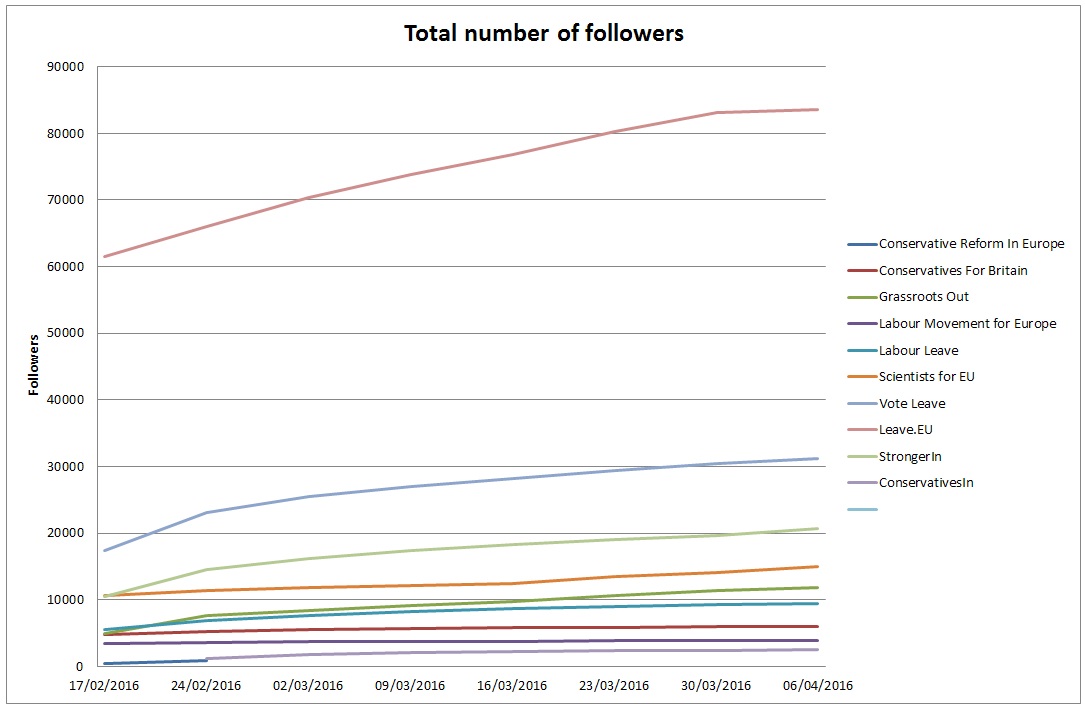 Overall, the decline in the number of tweets produced continued across the campaigns. @vote_leave produced the fewest tweets this week (103), with the majority of these were campaign related. LeaveEUOfficial produced the most tweets (248) and covered a broad range of issues, although again, there was a focus on campaign related tweets, in particular engaging with other twitter users to counter claims and criticism of their own campaign. StrongerIN produced 123 tweets, most focused on business/trade. 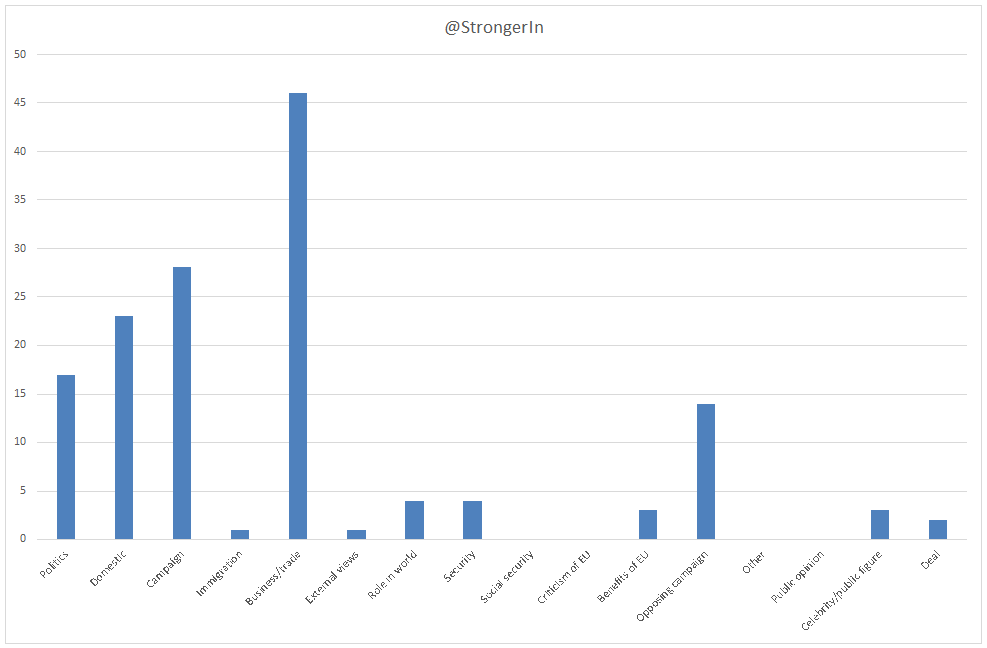 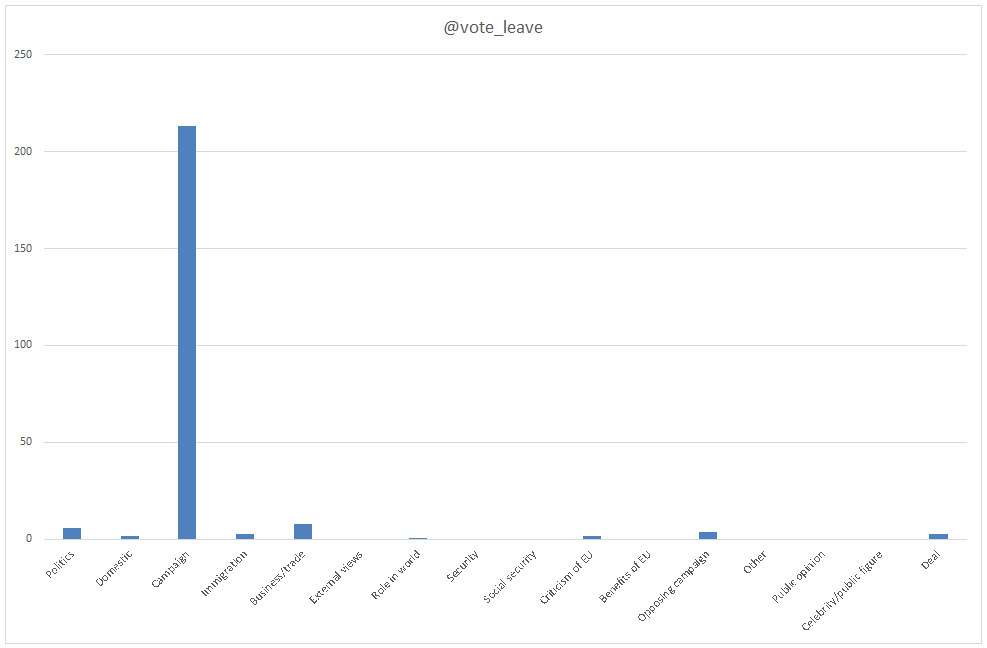 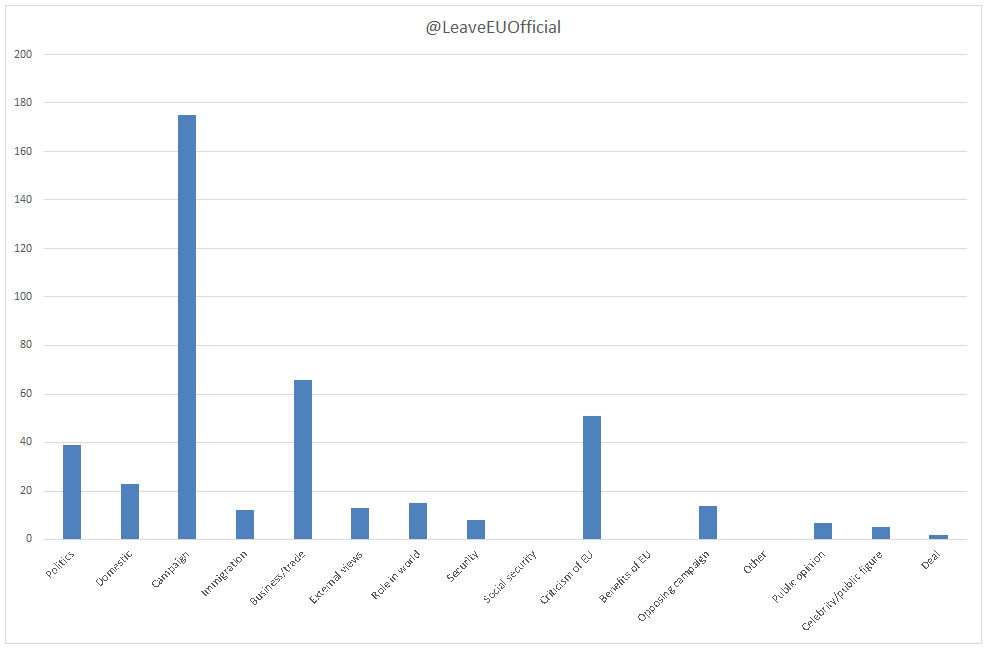 In previous posts, we have noted that negative campaigning seems to have some limits in its traction with followers, with positive tweets about arguments in support of a group’s position being much more likely to be re-tweeted (our proxy for endorsement). Since this seems to go against some of the literature about the impact of such messages, we have been expanding our analysis in this area.

The first message from this is that retweeting is a very variable phenomenon: as the chart below shows, peaks of retweeting tend to be ephemeral and more associated with those groups with smaller numbers of followers: it’s not coincidental that the groups with the most followers tend to have the lowest retweet rates, since they will have many more passive followers among those numbers. Note how it has been the party political-aligned groups that have accounted for most peaks. 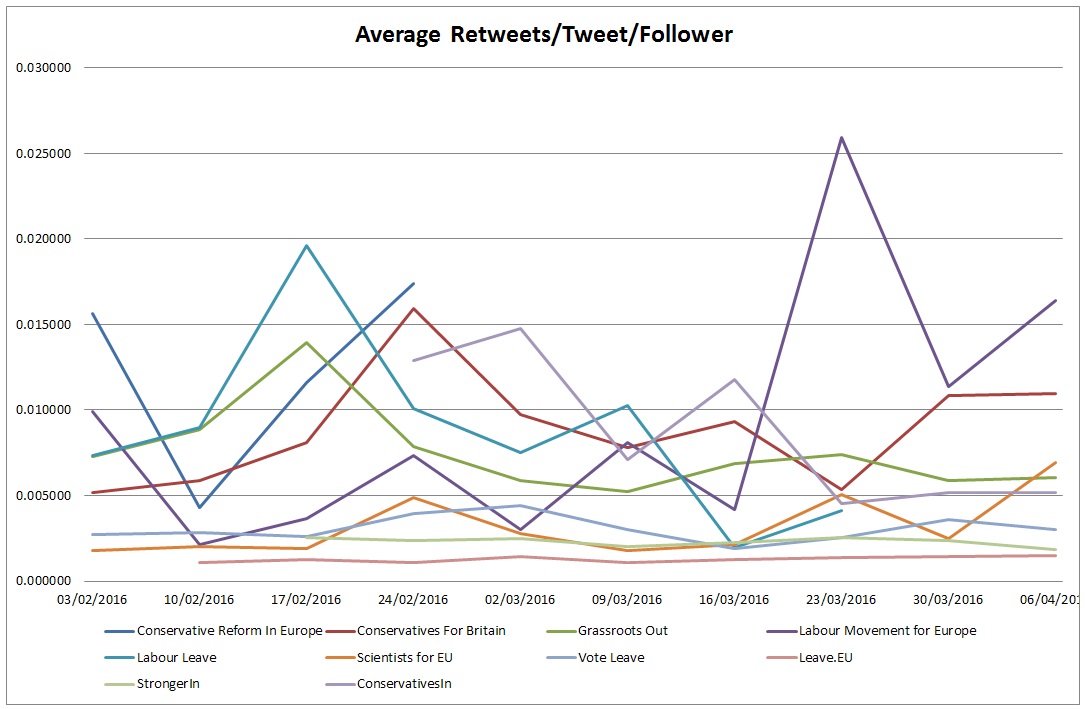 This also provides a partial explanation of why Remain groups have better retweet rates per follower than Leave groups: they are typically much smaller. In absolute terms they still have a much further reach at the moment.

On a weekly analysis, we can see that the framing of tweets and the subsequent likelihood of being retweeted is also more variable than previously described. The three peaks each can be ascribed to discrete events: the late-February European Council deal, a pre-Easter push by Labour Movement for Europe and then this week’s partial capture of the anger among Leave groups about the Government’s decision to publish a pro-membership leaflet. Since our sampling ends at midnight Wednesday, we fully expect that this effect will run into the next week. In short, there is still scope for relatively localised events to have larger impacts. 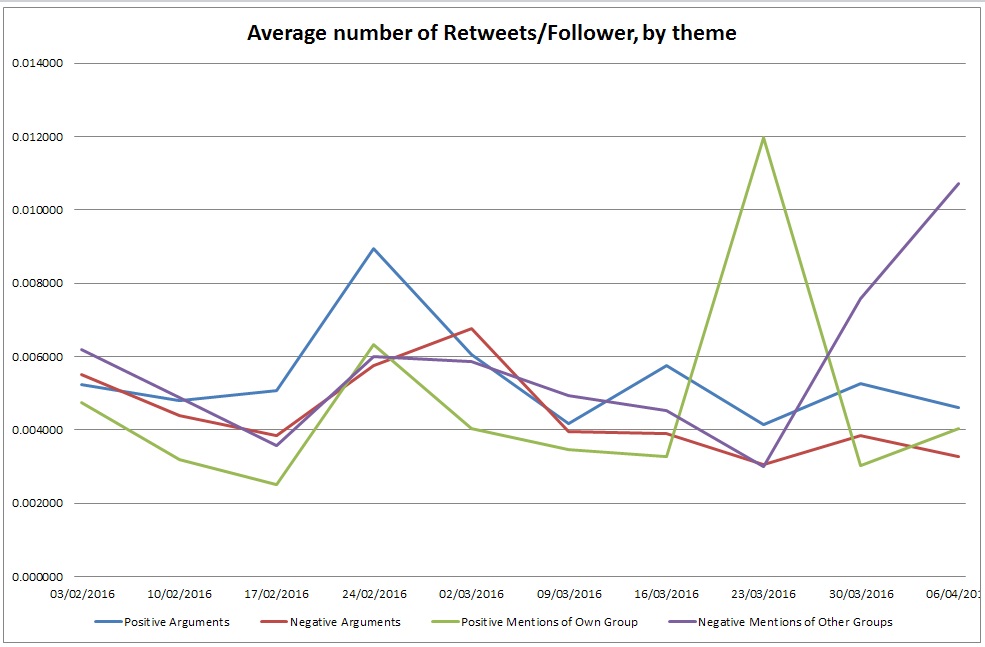 If we return to the chart that triggered our initial comments, we can see that the initial and clear lead that positive arguments had over other frames has been eroded over time. Only negative arguments now lags clearly behind, something that looks unlikely to change, given the persistence of positive framing overall. 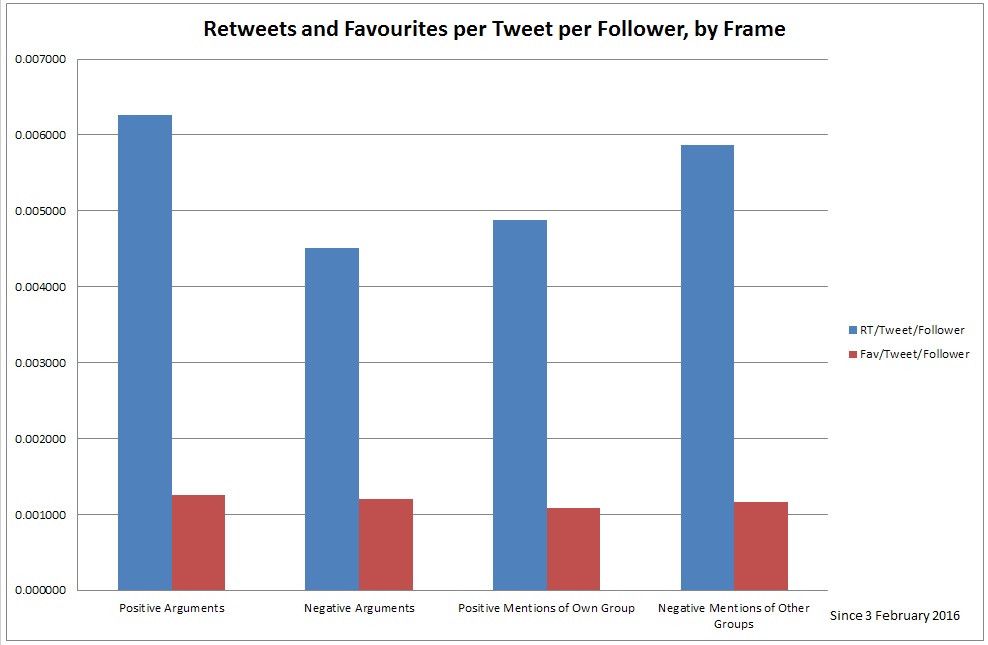 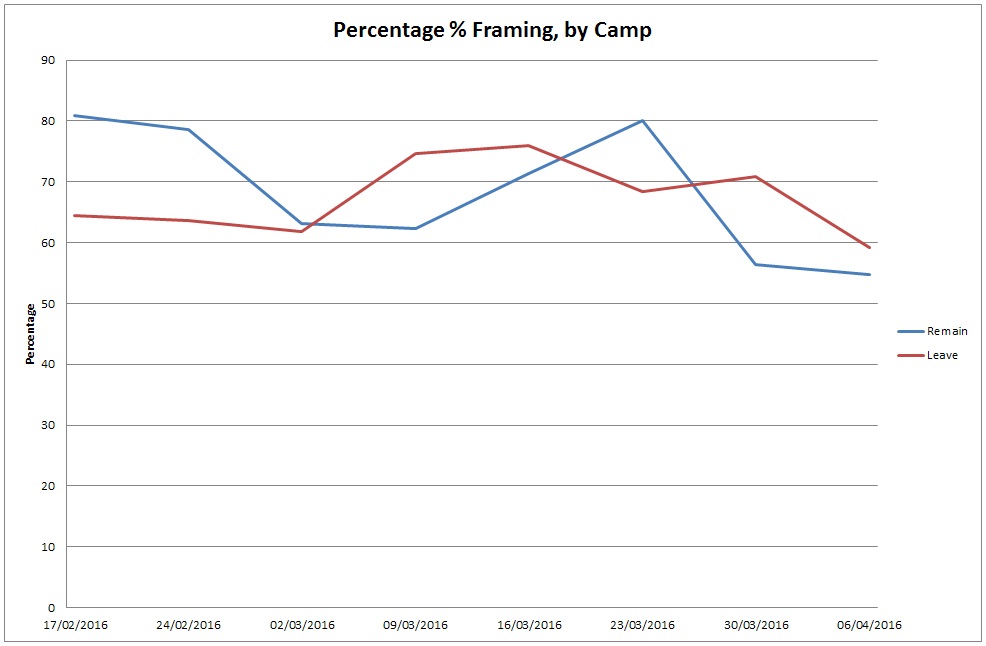 This brings us to how groups frame their tweets, which has been relatively stable since we began our surveying in late January: the chart below gives a summary since then. 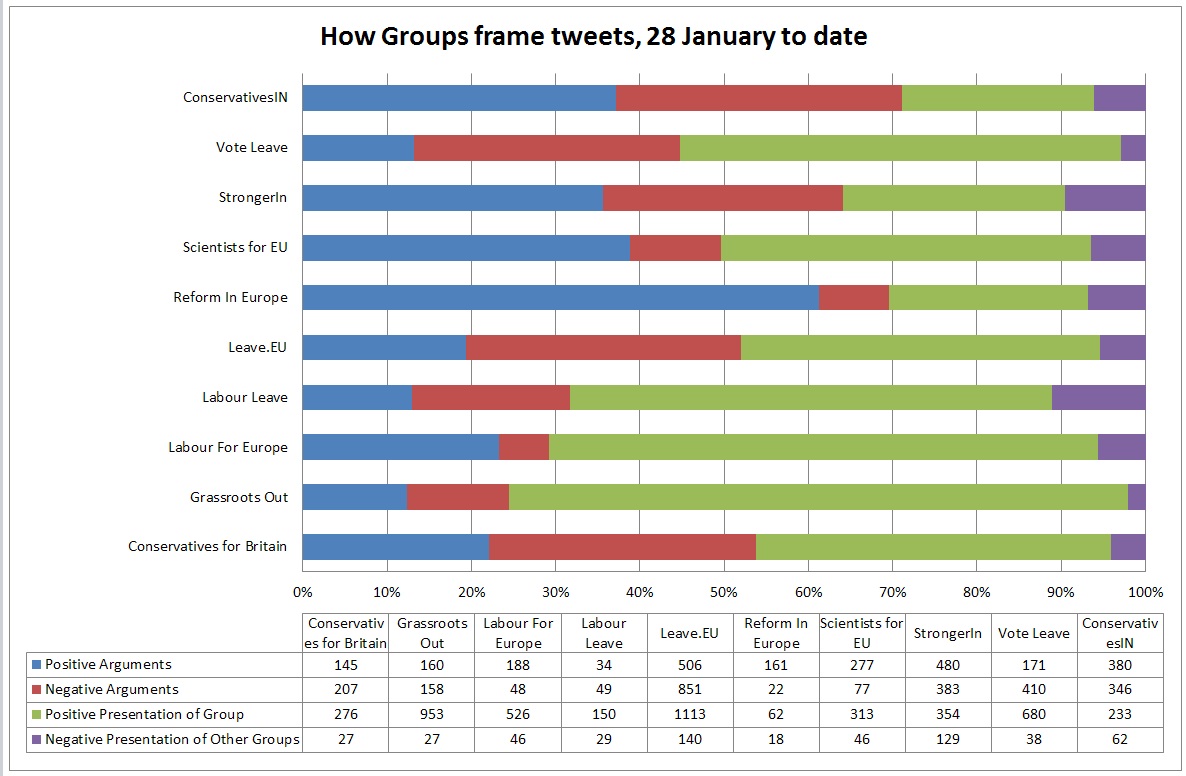 The differences here reflect more the way that groups have approached Twitter differently, with some (Grassroots Out, for example) trying to share local group activity, and others (like ConservativesIn) focusing more on making substantive arguments.

If there has been a change then it has come in the past two weeks, where the major groups have starting to interact more with other and with other users. However, this remains quite exceptional and it is still too soon to say whether it is a more structural shift.

The submission last week of documents to the Electoral Commission to form the official campaigning groups – by StrongerIn on Remain’s side, and Vote Leave and Grassroots Out for Leave – marks the most important development. As that designation is made, the extent to which the two successful groups can capitalise on an increase in interest and traffic to their Twitter accounts will be vital in their future success in shaping online debate. Moreover, the choices made by the unsuccessful Leave group will also matter: we might note that the decision by Leave.EU to make their submission via Grassroots Out might make political sense, but does make it that much harder to capitalise on the huge volume of followers that they have, especially if the designation goes to Vote Leave.

The battle of the designation: the EU referendum debate encapsulated