This week has been another quiet one on the EU campaign trail, with the combination of the bank holiday, Leicester’s famous triumph in the football and the various elections that happened yesterday. Of the groups we follow, only Labour Movement for Europe made any reference to these elections, primarily to mobilise their supporters to turn out the vote. However, the disconnection has been very strict otherwise.

As a result the main observations to be made concern the changing shape of the groups and their activities.

In another post yesterday, we made various observations about Grassroots Out, which seems to have shut down its main operations, while also spawning a multitude of sub-groups. Quite where this is heading remains unclear, but in this context it is worth noting that the group’s online profile has always been very strongly focused on promoting its many public events, which seem to be continuing. As the chart below shows, their volume of tweeting has been in decline since early March, which was when it started to create these sub-groups. 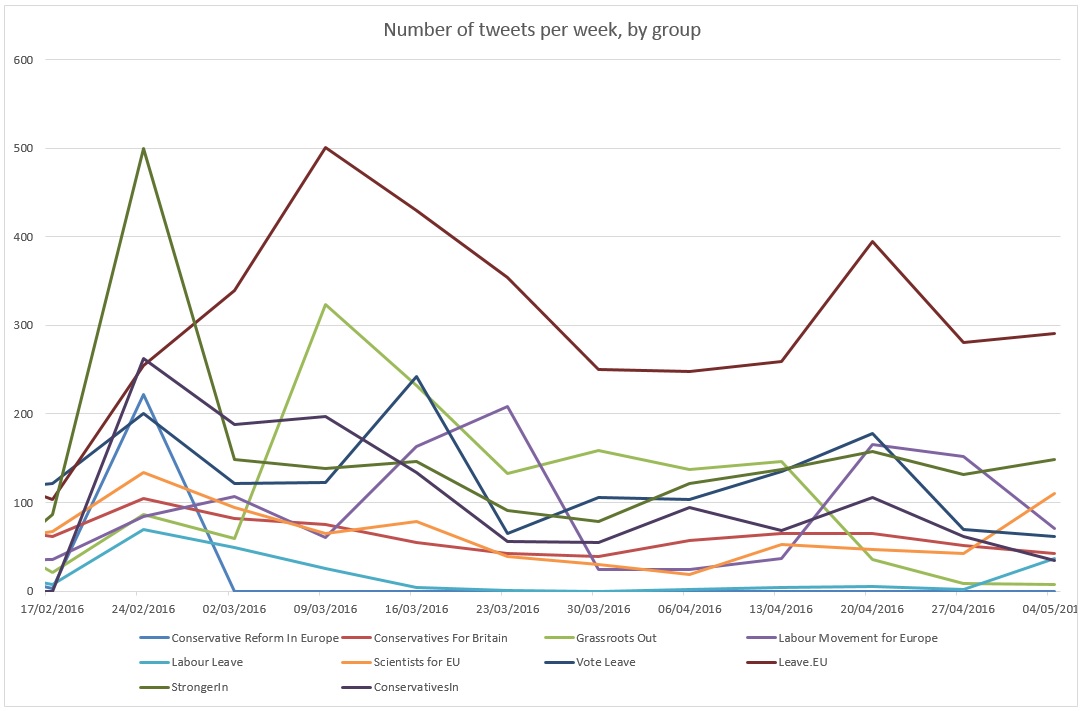 This week has also seen the return to more than token activity by Labour Leave, after over two months where it seemed to have wound itself down. Similarly, we note that Scientists for EU have also picking up on volume this week.

However, all of this has meant that there has been the weakest overall growth in followers since we started recording this in early February, with even the two lead groups failing to monopolise on their positions. 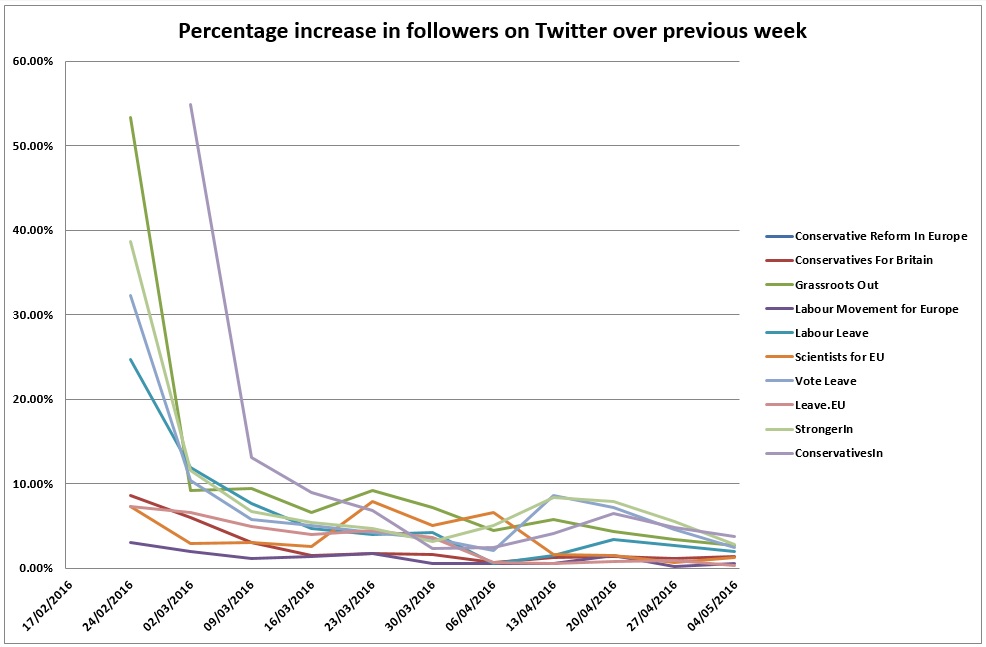 This general indifference is also seen in the decline in all groups’ retweet rates, with even those groups that have picked up activity falling back. Whether this will rebound in the current week remains unclear, although if there is any political fallout from the local and regional elections, then we would expect that to have a negative impact, as peoples’ attentions will remain diverted from the referendum. 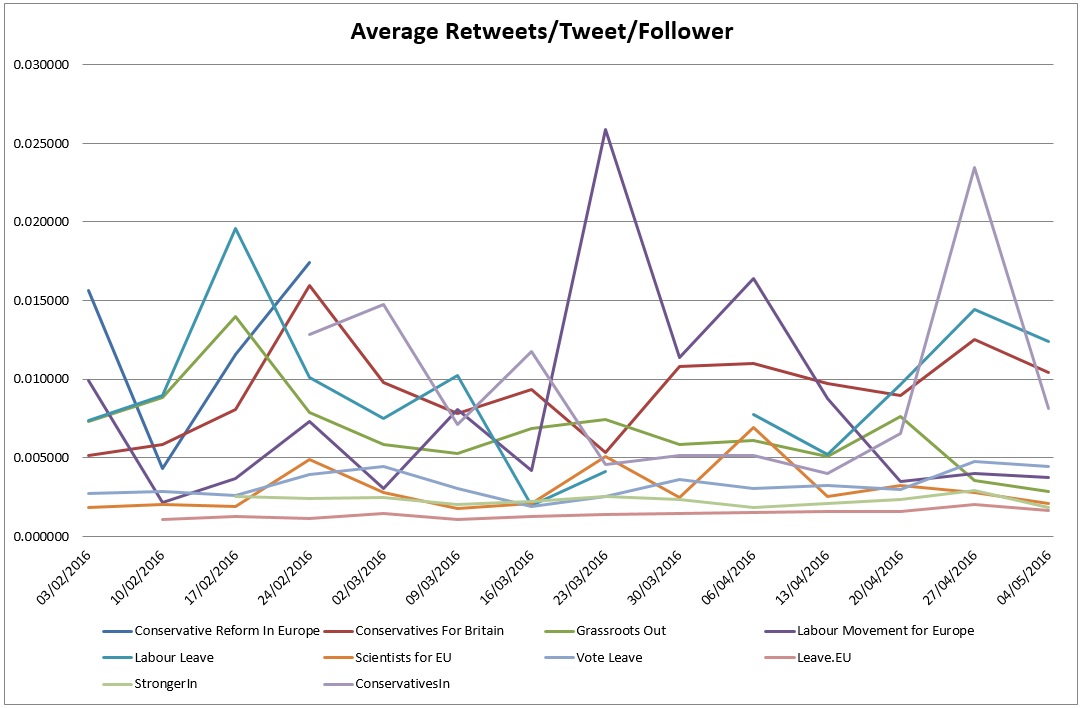 After last week’s swap-over on the traction of different frames, this week has seen that reversed once again, with negative comments about other groups again coming out on top. Taken as a whole, positive arguments remain the most retweeted, but on a weekly basis we can see a progressive deterioration in that rate, while the other rates have a much more erratic course. If this trend continues, then it will give more credence to the value of negative campaigning. While this is also reflected in the gentling declining percentage of positive tweets by both camps, negative content remains more the exception than the norm. 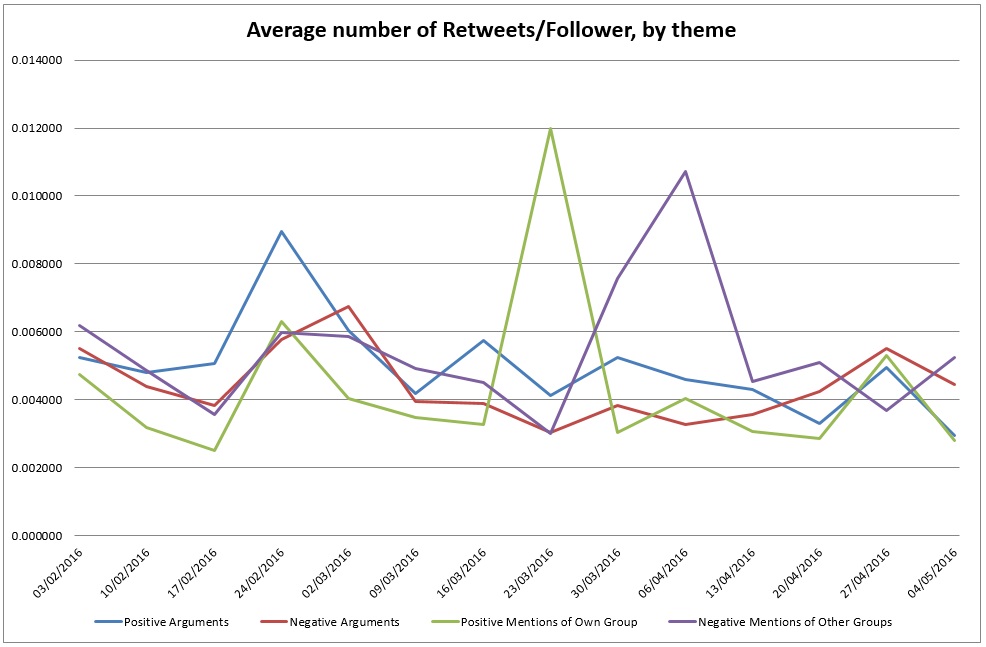 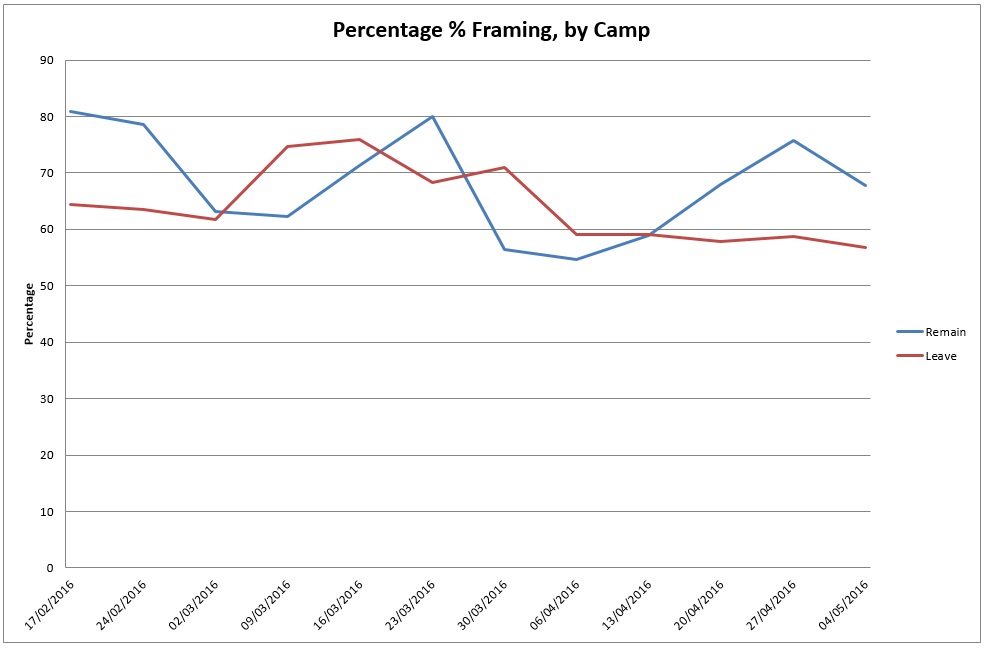 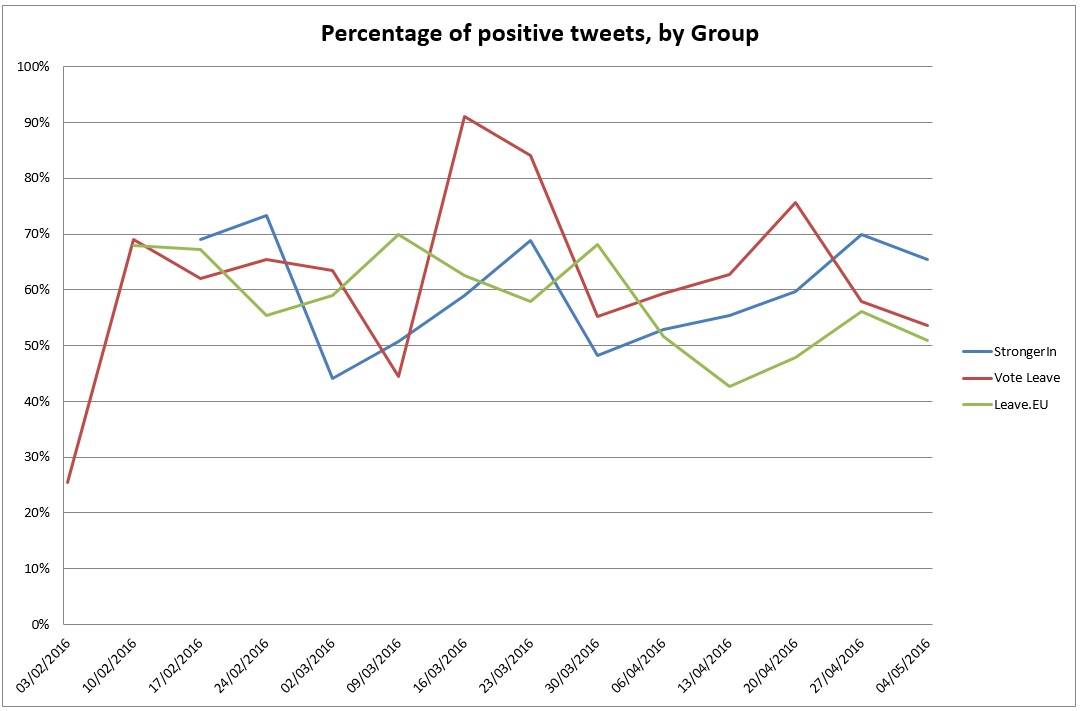 All the groups criticised the other campaigns (although Vote Leave did only once). Stronger In engaged in critiquing not just the official Vote Leave campaign, but also Arron Banks. Leave.EU critiqued not just the Remain campaigns but Vote Leave. 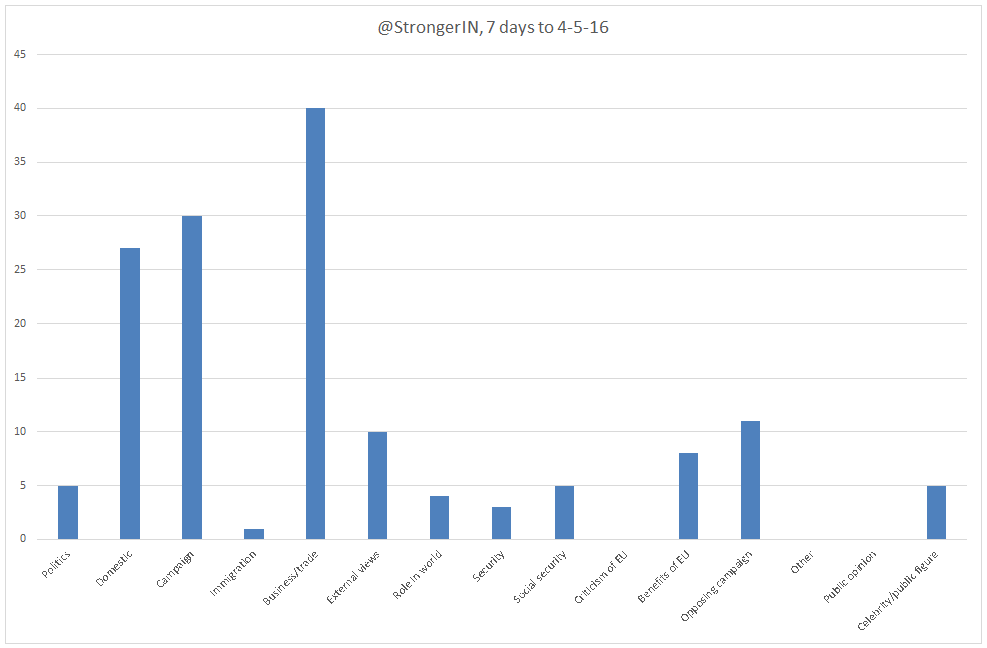 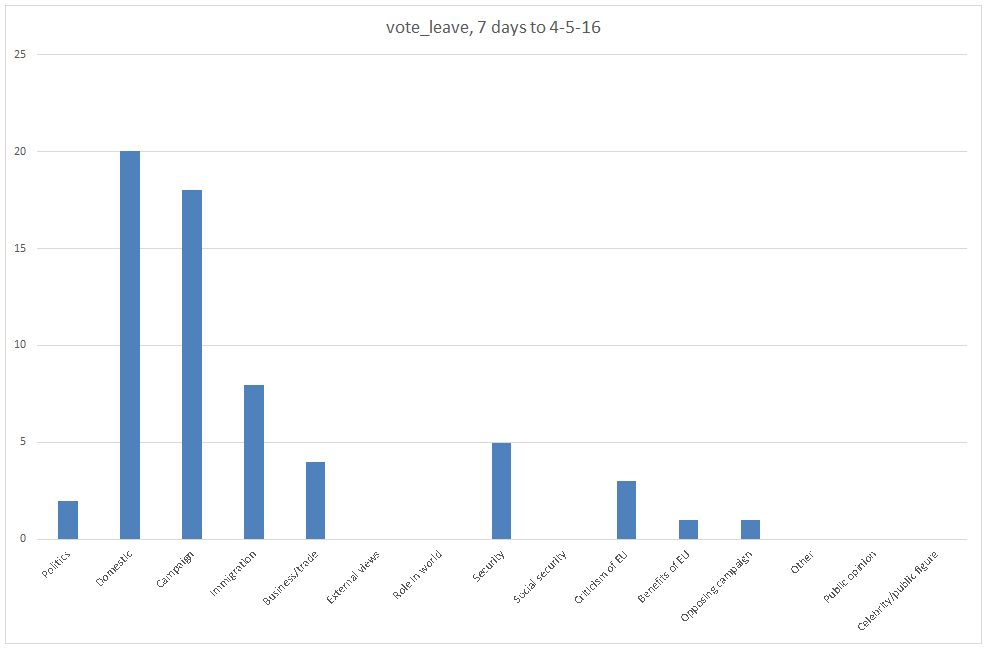 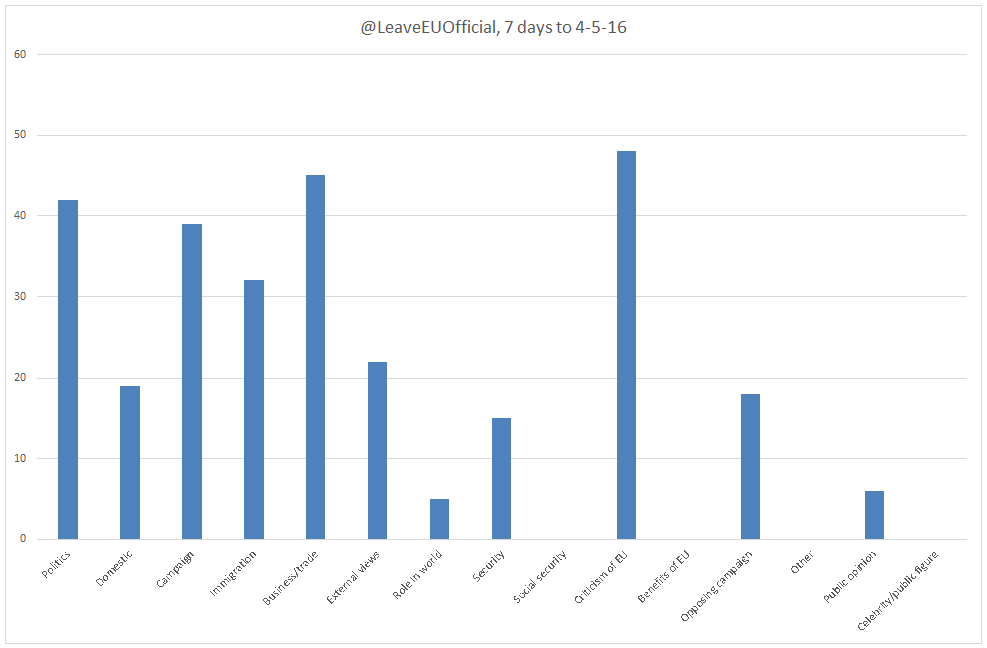 The curious case of Grassroots Out atomising campaign