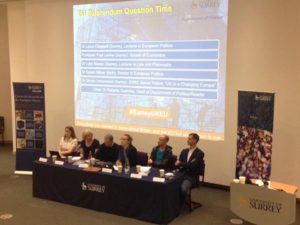 Last night we held our referendum question time event, with myself and colleagues from across the University, to try and provide some illumination on the questions that people are grappling with. We have got some audio, which I’ll try to upload later on (assuming the quality is good enough).

Rather than reprise the questions, I want to pick up on two ideas that came through from the debate.

The first came from Paul Levine, from our Economics Dpt., who works on modelling and has become the first person I’ve met who says they understand all the forecasts that have been produced by the various campaigns. He was very cautious about our capacity to make any predictions about what might happen in the future, whatever we chose to do on 23 June, but he did offer a broader conceptualisation of risk.

Essentially, Paul argued, there are probable ranges of outcomes, conditioned by the degree of uncertainty in our knowledge. While we can’t see precisely what will happen, we can at least estimate that range. In this light, remaining has a smaller range than leaving, because the latter introduces more variables that can, well, vary as well adding potential incentives for them to vary.

That, by itself, is not a good or bad thing, but if one is a risk-adverse type of person, then remaining looks more attractive, while the more adventurous among us might prefer the opportunity to try and make the most of the increased uncertainty linked to leaving. And this morning’s newspapers provide us with a great illustration of this point.

Paul’s idea was one that coloured much of what we discussed, but it was only towards the end of the evening that the second idea really came to the fore.

We got asking lots of questions about “what would happen to X if we left?”, to which – like the academics we all are – we replied “it depends”. Partly that was a function of the uncertainty about what post-membership arrangement would be negotiated under Art.50, but a larger part of it revolved around what the UK (or its government) would choose to do.

As I noted at some point, much more consequential in the shape and direction of our public provision than EU membership is the intention of the government. From the NHS to trade deals, immigration to the environment, it’s Westminister and Whitehall that really matter, rather than Brussels or Strasbourg.

Seen in this light, the referendum cannot ‘solve’ anything, but can only open a new chapter in our national debates and discussions. The bigger questions of the UK’s role in the world and the organisation of its state functions are ones that really need to be addressed, before anyone can reach a truly useful answer about EU membership.

Of course, one could point out that we’ve not really done that so far: several people last night pointed out how frustrated they felt about the mud-slinging and trashing of opponents that was going on. So here’s a last idea, from Law’s Luke Mason.