There are just three left until the EU referendum vote and the official groups have been cranking up the volume with their online campaigning. The past week has seen the highest number of tweets from all the groups we are followed since late February: all but one of the groups has increased its output over the previous week, with the two Labour groups now producing very much larger volumes of material. This contrasts with the wider debate about the position of the Labour party, which many in the public are not clear about: both sides thus have a clear incentive to position themselves as the voice of the party, and so much of their output has focused exactly on who is more representative. 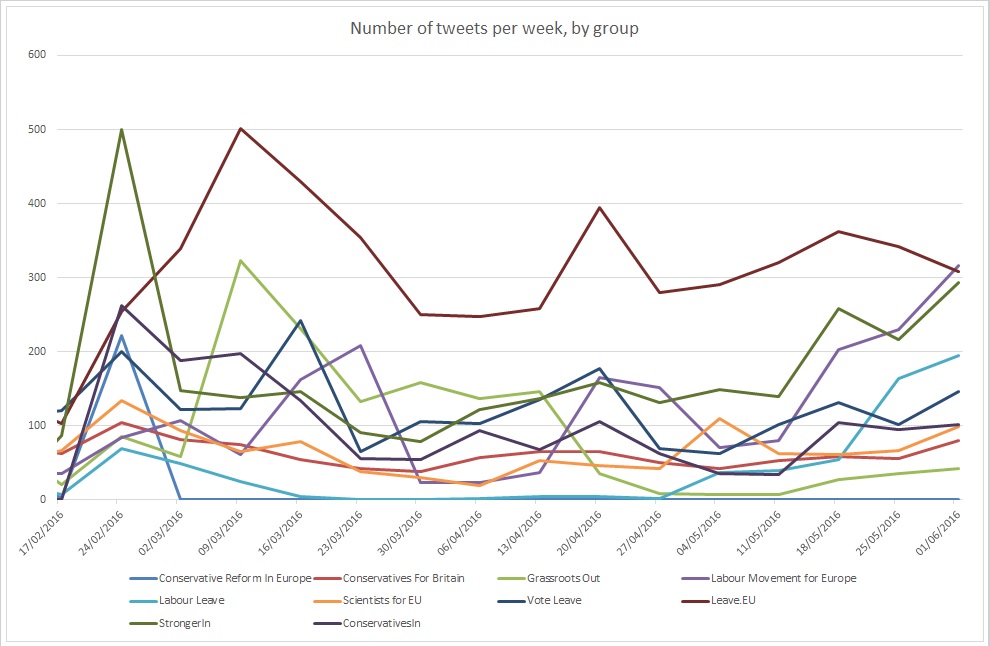 Interestingly, it has been the long-time front runner on volume, Leave.EU, that has seen the only drop in output this week. The group seems to have tired a very different approach in its social media campaigning this week, with a lot more content given to its campaigning, and a sharp drop in its negative comments on other groups. The reasons for the shift are not clear, nor whether it is a long-term change. Either way, it has had a noticeable impact on the percentage of positive campaigning, both for itself and for the wider Leave camp. By contrast, Stronger In seems to have stabilised at a higher level of negative comments than its counterpart Vote Leave, focused mainly on the lack of clarity of Leave plans should the UK leave the EU. 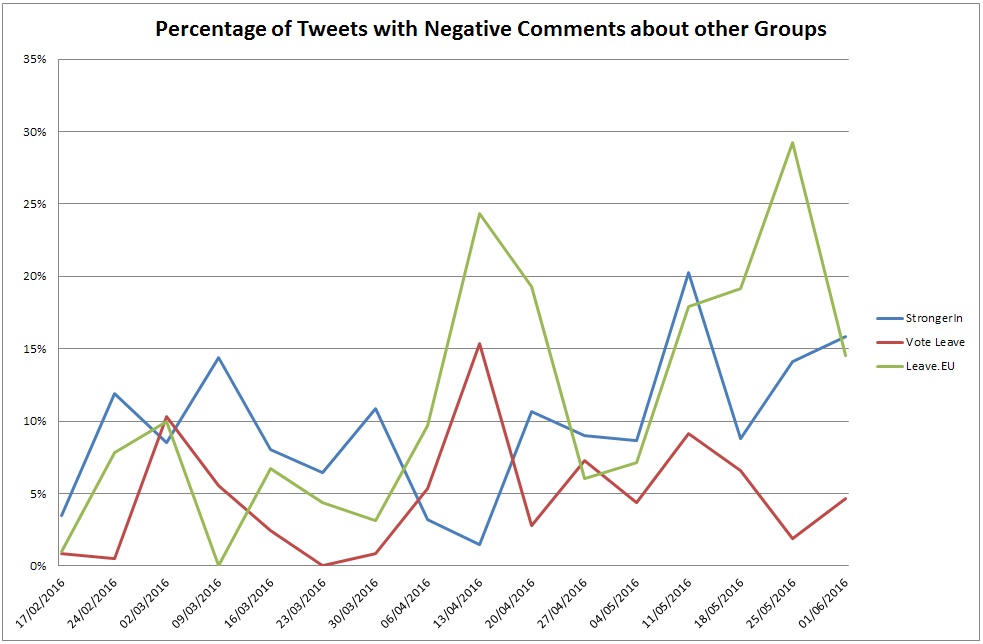 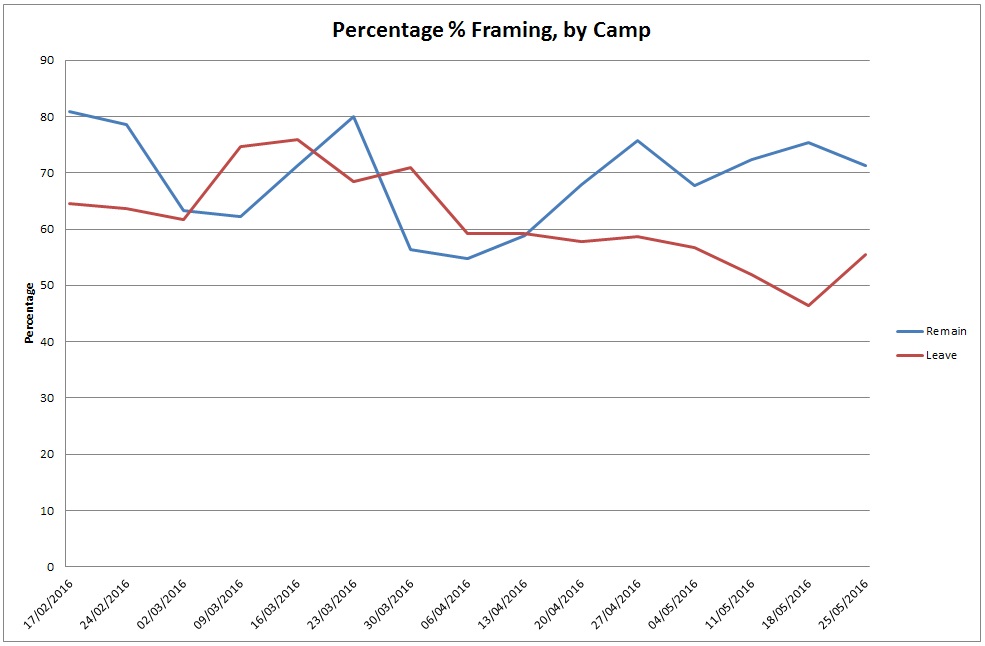 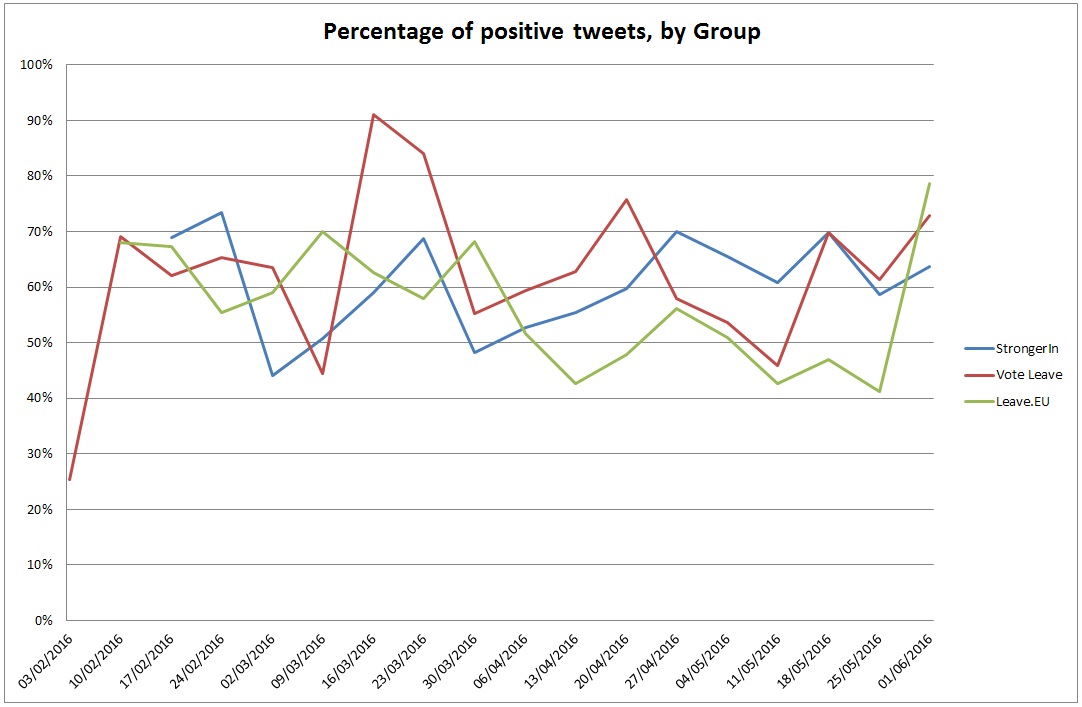 Whether all of this activity has had any great impact on the public is not clear. Firstly, the uptick in new followers we noted last week has not further moved up this week, with even the two official groups seemingly stuck at around 7% growth: a similar pattern applies on Facebook. This matters because if campaigners want to get more attention online, they will have to rely much more on retweets than on those following their own feed. This continues to be much more of an issue for Remain, with its much smaller base and with its need to promote turnout as much as possible. 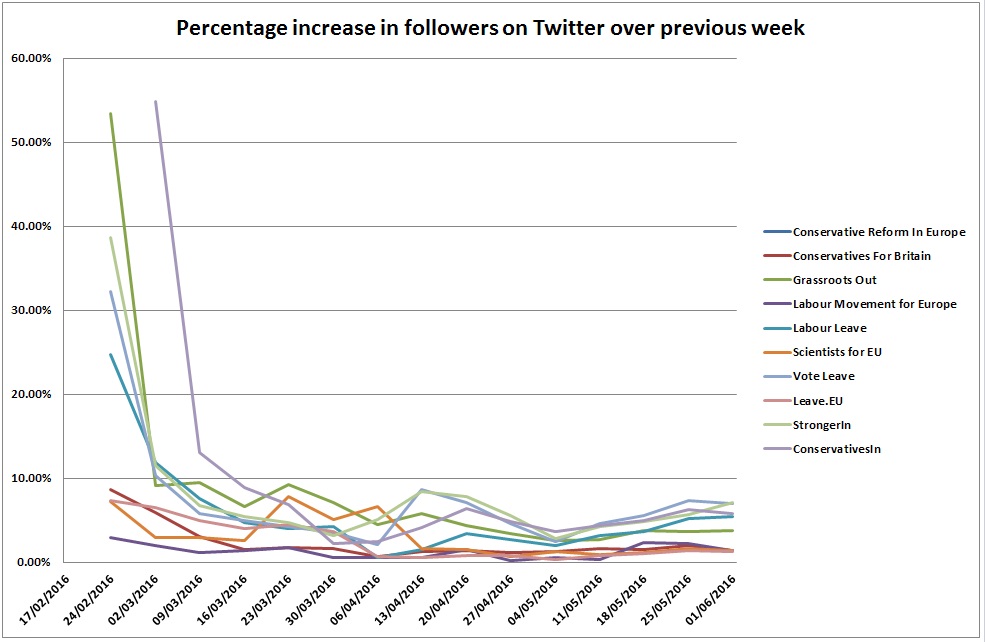 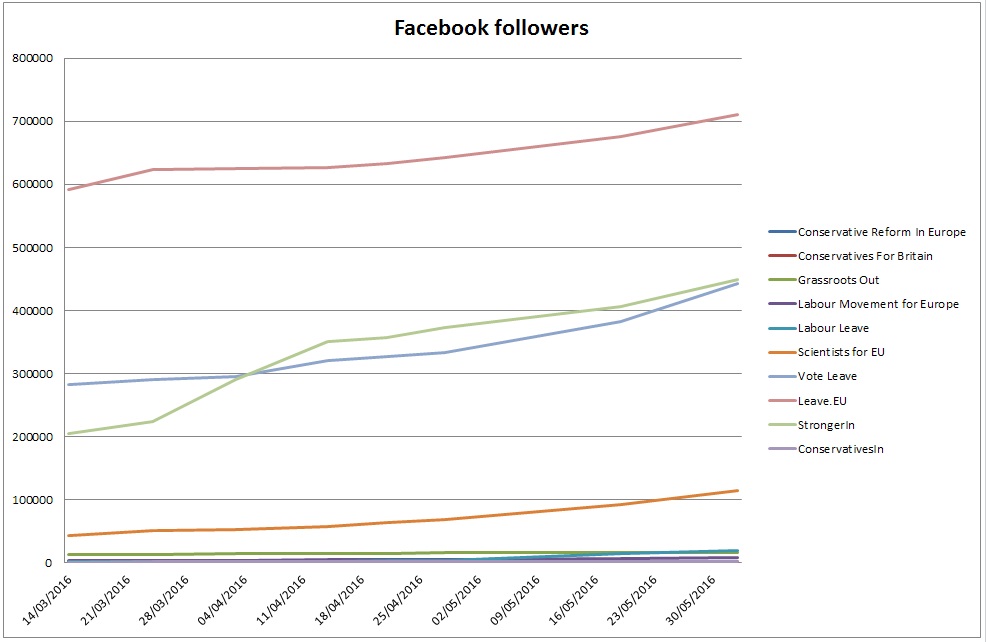 If retweeting is going to become more important, then the evidence is ambivalent here too. As the chart below shows, there’s no clear trend in retweet rates. Scientists for EU’s spike is almost entirely down to retweeting a GIF of a man trying to burn an EU flag, rather than any general uplift: the content might demonstrate the value of EU regulation, but looks rather ambivalent in its framing. 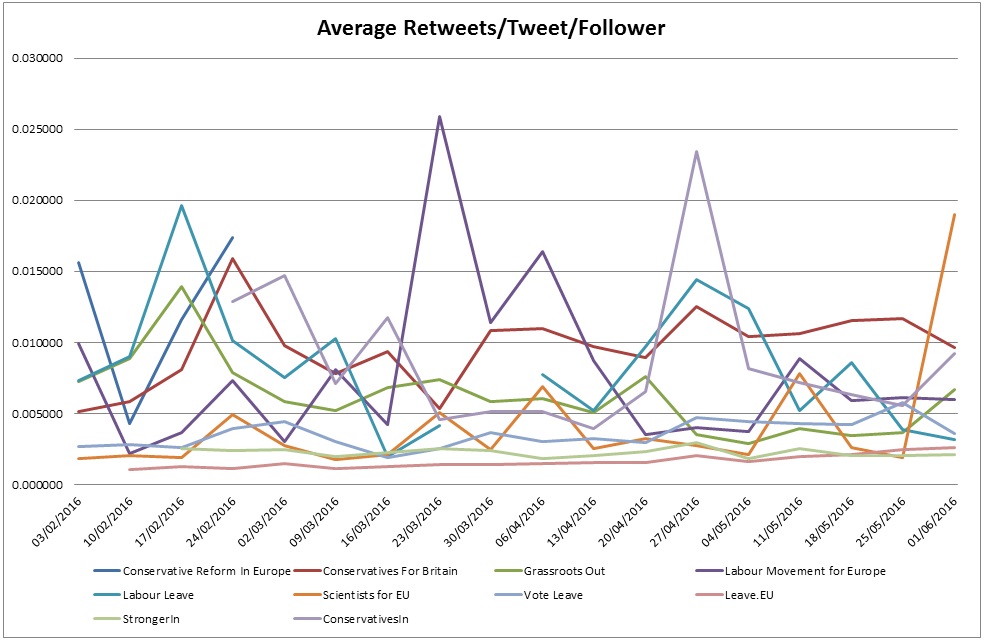 If groups have not been able to improve their Twitter presence by any marked extent, then the data on frames also gives conflicting advice on how best to present content. While negative campaigning seems to be the strategy with more traction for audience engagement since the start of the official campaign, this week has been a good one for positively-framed tweets. 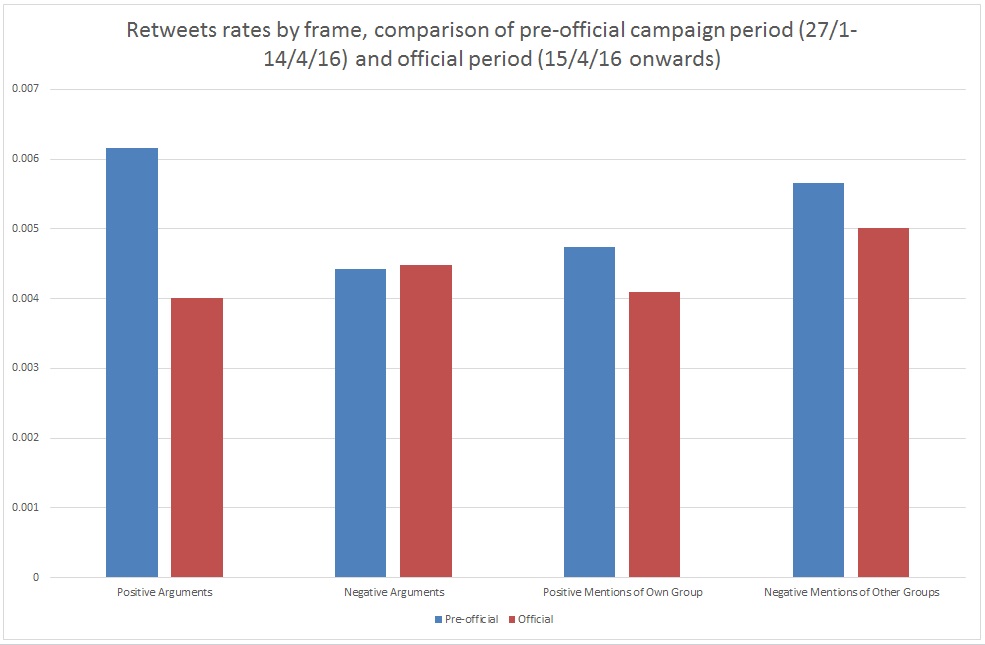 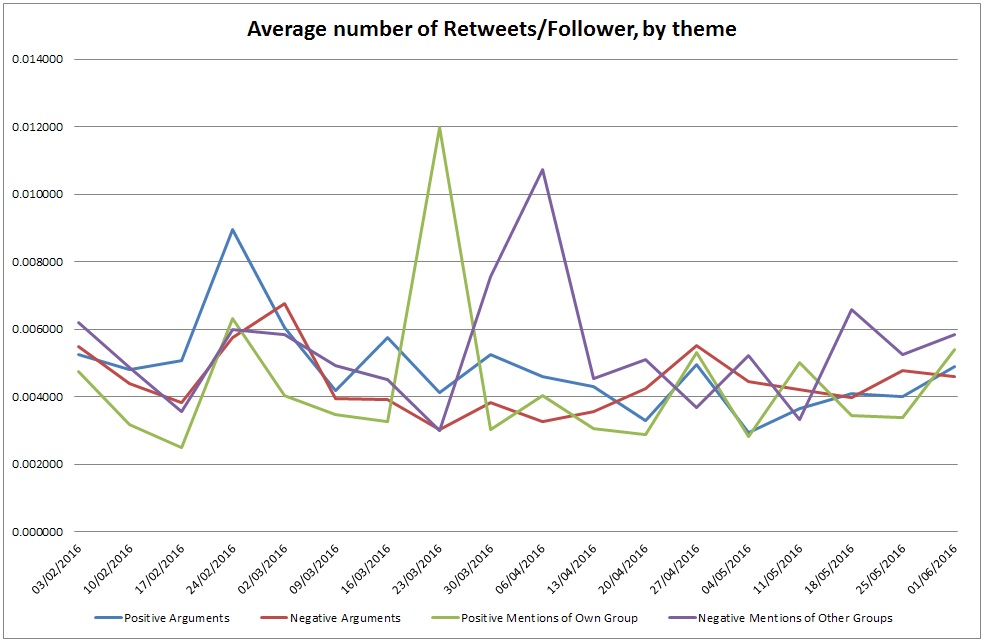