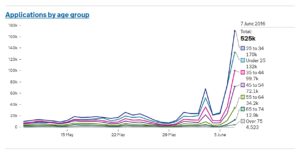 Looking around in these final weeks before the 23 June vote, there hasn’t much reason to feel that the EU referendum has come to occupy a central place in the lives of the British public. While the papers and the news programmes have been full of stories and arguments, this hasn’t seemed to fully translate into a public debate.

Let’s take a couple of markers of this.

Firstly, for all their ambivalent headline findings, the opinion polls do seem to have been pretty consistent on the volume of don’t knows. As NumberCruncherPolitics’ helpful site shows, this has hovered around the 10-15% mark since September. last year While it has drifted down since March it hasn’t moved at a rate that suggests a deep penetration of either side’s arguments, particularly if we also consider the broad stability of the polls: people don’t appear to be changing their minds very much.

Secondly, my work on social media that I’ve been blogging about each Friday has also shown that online campaigns have yet to show any big pick-up, in either followers or sharing of content. While this needs to be contextualised by the broader social media debate, it does, once again, suggest that both camps have yet to make a strong connection with the electorate.

All of which makes this week’s developments the more interesting.

Tuesday’s technical failings on the electoral roll registration website, and yesterday’s decision to extend the deadline to midnight (Thursday), was in many ways a classic piece of political ex-temporisation (i.e. making it up as you go along) and a reflection on the extent to which we still have to deal with the unexpected.*

On the other hand, it does mark one of the first instances where the public appear to have got active (albeit a skewed cross-section, not tucked up in bed of a Tuesday night): the spike easily exceeded that for last May’s general election, although in part that was down to the much greater volume of calls to register by government, media and activists.

Whatever the reasons, this mobilisation will matter.

For one thing, it means a not-insignificant number of voters will be now more likely to vote, after the drama of registering: a paradox of making it harder/more uncertain that they could vote at all is likely to be that they will now vote, as it has more value to them.

In addition, this influx will benefit the Remain campaign more, given the strong age gradient in late registrations. If there is a close outcome in a fortnight, then expect some re-visiting of this episode.

Finally, it matters because it’s given both sides a way into broader issues about the democratic life of the country. Tellingly, while Leave might have suffered from more young (more pro-EU) voters getting registered, they have been generally happy to extend the deadline. Of course, when a key part of your argument is that ‘we, the people’ need to take back control, it’s hard to then say ‘no, not you people’. Even the more wild and conspiratorial fringes have been quite constrained in their cries of a plot, at least so far.

The big challenge though is to now keep that interest and mobilisation. the TV debates might help, but if they follow the pattern established by the two to date (on Sky and ITV), then they will be more a case of not messsing up, rather than making the case. As I’ve observed elsewhere, good TV isn’t the same as good public debate and if the public doesn’t feel it’s got a voice or a role in the clash of politicians, then it’s likely to switch off, both literally and metaphorically.

Right now we stand on the cusp of matters. Which way we go from here is open. But if we want to find a more lasting settlement, then we all need to try and make the most of this time.

* Although as one academic who works a lot with online data collection told me yesterday, anyone who can’t cope with 500,000 queries, especially after having trailed the looming deadline so much, needs to take a long, hard look at themselves and their processes.