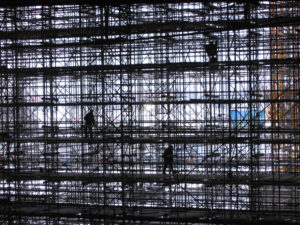 Now we’re back into the normal flow of things, I’ve been giving more talks about Brexit, and writing pieces for other sites. As I decried in my previous posts here (and here), a major challenge for pursuing Brexit is that there is no clarity on either side about what the objective might be.

That in turn makes it almost impossible to know how to get to a conclusion of any kind, let alone one that meets the needs of the various negotiating parties.

At the same time, I find myself increasingly bored with having to say that there’s no real plan on the table and that nobody is trying: it’s easy to take an ‘academic’ perspective and point out problems without offering any solutions. In that spirit, I’m going to offer a solution to you, right now.

In essence, what is proposed is a mechanism that could lead to a new UK-EU relationship. Recall that Article 50 only deals with immediate arrangements for a member state’s exit, running alongside another negotiation for the future. Practically speaking, the points below represent the second half of that Article 50 agreed text.

The first half would deal with the immediate practicalities of leaving – employment of UK nations in the institutions, re-location of agencies, etc – Andrew Duff and David Allen Green are good on these elements (here and here). Think of this as the partner moving out of the family home and the immediate changes that happen (‘I’m taking my toothbrush and a suitcase of clothes’): what follows is more like the divorce procedings proper.

The proposal is predicated three core assumptions. Firstly, that the UK must leave the EU, as per the referendum result. Secondly, that the EU27 are willing to tolerate  some ambiguity and flux, if it maintains a working relationship with the UK. Thirdly, that since the UK is a member state now, it is easier to work from that starting point than one of no relationship at all.

I accept now that all three assumptions can be (and are) challenged, but in the absence of a solid and agreed alternative agenda, there is still a good chance that this approach might be acceptable.

In particular, the model doesn’t make any assumption about what the final relationship will look like. Rather than just tell you what my ‘red lines’ are – which is of little interest to anyone but me – it is aimed at encouraging a rolling debate in the UK (and the EU27) about where issues specifically lie and ways in which to address them.

Enough set-up, now for the detail. The text would cover the following core elements (comments in italics):

This is a sketch of an idea, but one that I want to come back to. I appreciate that many readers will have problems with it, and I’d like to read those. Recall however that the intention is to establish a framework, not a particular objective. For this to work, it needs a British government that is sufficiently engaged with the matter both to support public debate within the UK and to discuss matters with the EU27. It also needs an EU27 that feel that UK will be a reliable negotiating partner: if not, then it is unlikely to support this kind of approach.