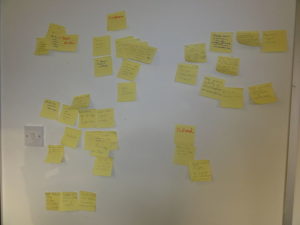 Tuesday’s speech by Theresa May was a hastily-arranged set-piece. While there had been talk of further details on the vacuous “Brexit means Brexit” stance of the autumn “early in the new year”, no one had particular expectations. That there wasn’t even a time fixed until the afternoon before suggests that this was an improvisation, rather than part of a masterplan.

Certainly, when it came, the speech was designed to win any prizes from the speechwriter’s guild. 12 principles (approximately 9 too many), a lengthy and vapid opening, coupled to a bizarrely threatening peroration: the feel was of someone being told to write whatever they found on the Number 10 whiteboard after the last brainstorming session.

The most obvious answer is that May needs to throw some meat to the restless elements within her party and her backers in the media. Her premiership is grounded entirely on being a safe pair of hands in delivering Brexit and she cannot be seen not to do that. Hence the briefings beforehand that ‘half-in, half-out’ options weren’t acceptable: hence also that menacing tone and the assertion that ‘no deal is better than a bad deal’. The front pages the next day and the hearty support at PMQs suggest that she met this most basic of goals.

Moreover, May is using what little sense of a plan she has to beat Labour senseless. Jeremy Corbyn’s patent inability either to build a consistent party line or to critique May with anything more than a vague sense that she must be wrong leaves Labour representing neither the 48% or the 52%. While the 2020 general election might feel a long off, it’s never too soon to press for a more favourable situation.

Finally, May also clearly used the speech to signal her intentions to the EU27, albeit after doing the other things first. Her concession that she would not try to flog the dead horse of single market participation without free movement of people avoids a huge beartrap. Likewise, the long shopping list at least indicates her awareness of key areas for debate, in what she clearly sees as being more than just a bare minimum Article 50 agreement. The hope has to be that the closing bravura comments will be seen as just part of the public posturing, rather than genuine statements of intent.

In that May was – as always – actually very careful in what she said. To take just one example, this was one of the very few times that she has discussing financial contributions post-membership, since she knows that most agreements will imply some money changing hands. However, all she said was that there needed to be an end to ‘huge sums’ going to the EU: hardly the most precise of terms, especially from a person who found the claim on the bus as objectionable as most Remainers.

Likewise, her hedging on the customs union was more subtle than many noticed: she dislikes the common external tariff, rather than the customs union as a whole (albeit ignoring that the former is an essential part of the latter), with the implication that some cunning wheeze might be possible. Admittedly, her statement that she was ‘open-minded’ about how to square that circle did sound like a plea for suggestions rather than a perusing of well-developed options.

And this is the nub of May’s problem.

She has grasped that for many in the UK, the anxiety about Brexit takes precedence over the desire for specific and particular policy outcomes. It’s no surprise that the newspapers were all about her forthright stance on the deal, rather than any of the specifics. That’s either because the press think she’s got the right idea and isn’t going to be pushed around by the EU27, or because they are concerned about how things look and consider May to be the best port in the storm: either way, in the short-run the effect is the same, namely flag-waving and boo-yah politics (as typified, obviously, by the Foreign Secretary).

However, the abiding sense from May’s speech is that she is trying to be clever. She has defused some policy issues ahead of the Article 50 notification, and possibly obviated the need for anything more formal – like a white paper – that might tie her down. She’s also left herself a load of wiggle room for the concessions she really – and realistically – expects to make in the coming years.

The danger is that she has raised expectations. The floundering of Labour provides for a uniquely-favourable Parliamentary climate (Tory rebels notwithstanding), while her impressive skill at stone-walling over the past six months lead her to feel confident that she is riding the tiger, and even guiding it back towards the zoo.

But this feels hubristic: as we await the Supreme Court ruling next Tuesday, we are reminded that May – indeed, none of us – know what the UK’s own process for notification will look like, let alone how those Article 50 negotiations will work once begun. In addition, May has now loaded a set of expectations on an already ambitious schedule, with no clear way of meeting them.

And it is here that the incoherence of the speech really comes home to roost. Broadly speaking, May is looking at a comprehensive free trade agreement, like Canada’s but with some bells an whistles, but her approach is currently defined by what she doesn’t want, rather than what she does. Put differently, her overarching intent is unclear: if one wanted to put it into words, then her Foreign Secretary’s words on cake spring to mind.

Having raised expectations with a press and a public that barely understands the EU, May now risks a backlash as she engages with the EU27. Well she might argue later that she never promised what they thought she did, but the degree of latitude she might be accorded is very unclear, especially if it sounds like she is saying that everyone was too stupid to notice.

So far Theresa May has avoided making too many hostages to fortune, but this week may have marked the end of that. What has worked for the prelude might not now work for the main event.

Brexit is still happening, just not the way May hoped