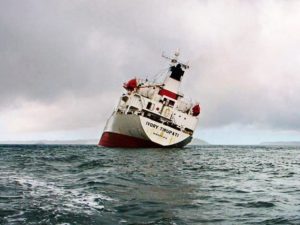 Speaking at another Brexit-themed talk in Antwerp this week, I found myself once again noting the matter of issue discovery.

Despite being over 8 months after the referendum, which itself was confirmed as happening in May 2015, and with years of debate beforehand, we still find ourselves in a position where new elements keep on being discovered.

Sometimes, that’s something really mundane – like Marmite price-hikes – or it’s something surprisingly big – like Gibraltar. Equally, we still find that things we thought were clear, are not: WTO schedules springs to mind as a recent example or a thing that was originally seen as very easy, then very complex and now a bit complex.

What we need is a nice big list of all the things that need to be considered in Brexit.

Of course, such a list is not an easy task to undertake, for several reasons.

First-order effects would be those that are directly and unambiguously the result of leaving the EU. Examples here would be any part of public policy where legislation is at the EU-level (agriculture, for example), or where there is a reliance on EU principles (e.g. free movement across the Irish-Northern Irish border).

Second-order effects occur where the first-order effects change related situations. The Marmite thing is a handy example: the shift in the exchange rate following the referendum has led to higher import prices, which causes price inflation for a variety of goods and, ultimately, impacts on consumer spending and confidence, as well as patterns of industrial production. Kind-of Brexit-y, but also clearly informed by other factors of economic activity.

If the first-order effects are hard enough to pin down, then the second-order stuff is harder still. At some point, everything is Brexit.

The second big issue is that effects don’t just land on the UK government. Clearly there are effects on other EU member states, but also on British society, in ways that are beyond the control of Whitehall or Westminster. To pick a non-random example, the changes in public attitudes towards immigrants since the referendum is something that many EU nationals have noted, but the extent to which the government is willing or able to articulate a reaffirmation of the value of immigrants in society is highly debatable.

Likewise, that Brexit will have major repercussions on Ireland is seemingly beyond the scope of London’s direct concerns, even as there is a realisation that it does have a direct impact on the conduct of Article 50 negotiations.

Finally, to list is to prioritise and the British government appears congenitally unwilling to express anything prior to Article 50 notification that might denote a set of priorities. The White Paper is a list of things that strike Number 10 as important parts of Britain’s future, rather than a comprehensive list of what needs to be dealt with.

Of course, there are lists out there.

The UK government did conduct its Review of the Balance of Competences under the coalition government, completing in 2014. This sought to understand where and how the EU impacted on areas of public policy. Ultimately, that concluded that things were generally pretty good and the balance generally appropriate. However, the Review was driven by this notion of balance, rather than impact, so its utility as a checklist is limited.

The Commission has also worked through its list of points to discuss under Article 50, but this too is limited – by necessity – to matters of EU acquis, which is not as all-encompassing as one might think.

All of this matters for very obvious reasons.

As we all know, Article 50 negotiations are limited to two years, so discovering another pile of things to discuss isn’t a good way to reach an agreement within that timeframe. For a British government that hasn’t yet demonstrated that it is in control of the issues, further surprises cannot help its image and standing.

Moreover, once negotiations begin, the introduction of new elements is likely to make matters more difficult to resolve. Even on a minimal Article 50 package, there are a lot of elements, each pulling in different directions, resulting in what is likely to be a fairly small win-set. Structurally, there needs to be good sight of all the elements from the beginning if that win-set is to be realised.

Brexit is important. It matters in a way that not many other public policy decisions have mattered. To then find that we don’t even have a good sense of the range of issues that Brexit – even in the narrow sense of Article 50 negotiations – might cover should be something of concern to us all, whatever our political standpoint. Public policy works best when it is informed and considered, not when it is being made on the run.

As the clock ticks down to notification, the opportunity to get a firm footing grows ever smaller.

Exiting the EU? Opportunities and pitfalls for gender mainstreaming

Hubris on the road to Brexit