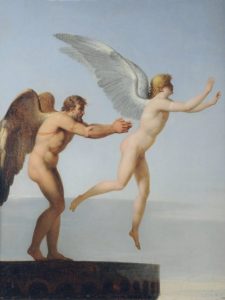 I was going to write about hubris and nemesis, but to be in keeping with the spirit of the age in these parts, let’s work on a more local formulation the same ideas. Pride comes before a fall.

Looking around Westminster, there’s plenty of pride. Pride from a government that has a commanding lead in the opinion polls, that lacks an meaningful opposition, that talks the talk of making Britain a global player. That no one can gainsay all of this must mean that the government is right, right?

But there’s a reason that the ancient Greeks – and many others – have proverbs about pride. It blinds one to the problems that might ultimately undo you; it gives false confidence and makes you forget the struggles you had to make to get to where you are. Even if you don’t go the full-Damocles on it, it still pays to keep reminding yourself that there are limits and dangers. We do not transcend our situations, we only forget them for a while, until they come to bite us on the backside.

This week has been particularly rich for hubris. Firstly, Philip Hammond backtracking on NICS contributions, having failed to prepare the ground properly with his party and media supporters. Secondly, Philip Hammond announcing his change of policy shortly before Prime Minister’s Questions – going against years of practice – because the frontbench felt so confident about the weakness of Jeremy Corbyn to make use of it (correctly, as it turned out).

But most importantly, David Davis gave evidence to the Exiting the EU Select Committee yesterday.

In this evidence, Davis seemed to take a most cavalier of approaches, repeatedly indicating that his Department didn’t know or hadn’t go around to doing various impact assessments or writing of policy objectives, from EHIC to an overall plan. Given that DExEU is to be a coordinating department for government for Article 50 – according to its DG – this looks highly problematic.

To be clear, this isn’t a let’s-stop-Brexit argument, but a Brexit-is-complex-so-let’s-try-our-best-to-work-through-that-complexity argument. As any negotiator will tell you, if you fail to prepare, then you should prepare to fail (and it’s not just American negotiators who’d say that).

The persistence of the ‘no deal is better than a bad deal’ line of argument might resonate with a public that looks to government to provide clear leadership. But if you don’t know what either a bad deal or no deal look like, then you can’t actually defend the line. That there is no indication of what constitutes a ‘bad deal’ from government suggests that this is rhetoric rather than substance: certainly, that the EU27 argue that no deal is obviously worse than a bad deal suggests that – at the very least – there is uncertainty about the matter.

I’ve written before about negotiating theory and Brexit and I don’t wish to rehash all those points again here, but I will note that there is a persistent error in the government’s approach to Brexit. This error is a simple one, of confusing toughness with preparation. In their defence, it’s the oldest negotiating mistake in the book: it’s about winning, rather than finding optimal solutions.

If you like, it’s an extension of the habitual British problem in the EU, of thinking that everything is zero-sum and non-connected. If you see the world as a series of battles, then you fight them as they turn up: you don’t lift your head to consider the bigger picture, and you certainly don’t think about why these points of tension have arisen in the first place. Likewise, one the reasons Theresa May is getting a tough time of things is that she suffers the damage inflicted by her predecessors as PM over the decades: ‘here come the Brits again’. Even a more obviously pro-EU figure like Tony Blair found it very hard to demonstrate his good faith (no sniggering at the back) on matters European.

The reasons for the government’s confidence are not too hard to find. Number 10 is driving forward an agenda very successfully, as no other part of government seems to offer – or want to offer – an alternative; Cabinet is largely supine in the face of a daunting project; Parliament is in oppositional disarray; and, importantly, negotiations haven’t begun, so there is no need to concede anything.

This cannot – will not – last. As May well knows, once Article 50 is triggered, the crucible of debate is no longer in London, but in Brussels. Moreover, it will be between the EU27, with the UK as a bit player: it’s hard to defend your interests if you’re not in the room.

Again, it might be that there is a cunning plan behind all this, one that will be unrolled at notification. But there is nothing to really support that view from what has happened so far.

If pride does come before a fall, the question is going to be how hard, how fast and how far will that fall be.

Issue discovery and Brexit: How will we know what all the points of impact might be?

What to look out for in Article 50