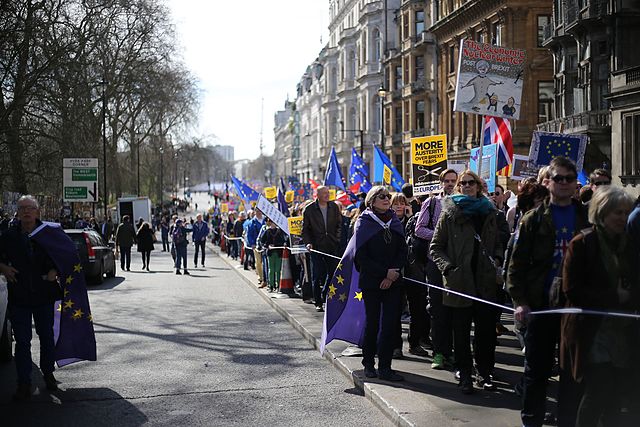 This Tuesday, while most of us where thinking of other things, I was at the Social Market Foundation, talking about Brexit and euroscepticism.

In the course of questions at the end, I was asked whether British pro-Europeans displayed the same range and variety of positions as sceptics, to which I noted mobilisation hadn’t really happened. A bit more harshly, I said:

"Lots of pro-EU people are middle class couples who come to a London demo, go to pizza express, then go home. It's not enough."- @Usherwood

As a general rule, if I’m going to be snippy, then I feel I should explain myself, so you can judge better whether it’s warranted or not.

In essence, pro-Europeans have faced two interlinked issues, one on the supply side and one on the demand side.

Demand: a lack of fundamental challenge

If we consider mobilisation around the issue of European integration, then identity plays an important role. For sceptics, the threat to a core part of their social identity – their nationality – has endlessly been used to move people to action: we often focus on the control part of “let’s take back control”, but we also need to consider the half-hided ‘us’ too. National identity is taken as natural and eternal, a bedrock on which we act out our daily lives and our sense of community: the Manchester attacks demonstrate that all too well.

As such, eurosceptics have always had a strong identificational base from which to work. If you want to take that to a more extreme position, then all euroscepticism might be conceptualised as nationalism, dressed in either the language of the left or the right: I hesitate to go that far, but the point is well-made.

By contrast, pro-Europeans lack the same depth of emotional belonging. Very few people indeed consider themselves just ‘European’ and those that do are typically the sort of people I mentioned in my talk: cosmopolitan types, who see the EU as part of a bigger package of European-ness. In broad terms, these are people who will have the resources and the inclination to be able to continue their Anywhere-ish lifestyles post-Brexit. Thus, the loss of EU membership is painful, but not necessarily critical in the same way that national identity is for sceptics.

This isn’t to suggest that the substantial volumes of people who have turned out (and continue to turn out) for pro-EU demonstrations don’t really care, but rather that they have more space to adapt their identification politics and so less incentive to translate action on the streets into concerted political activity.

Supply: the costs of dominance

On the other side of the equation is the paradoxical over-supply of broadly pro-EU policy outcomes. Once EU membership was secured, the political and economic establishment moved to take that as a given. Certainly, there were many issues and problems with the specifics of that membership, but the broad thrust was one of participation, that being the best way to change the things one didn’t like.

Seen in this light, pro-Europeans had no strong incentive to create specific political organisations, partly because so many others seemed to be doing that for them, partly because the issue was so environmental and structural as to make action for membership per se appear rather ridiculous. This is underlined by the sole mobilisation that did take play, namely among federalists, who were the only ones not served by the array of groups already out there.

This is true across the EU, where groups specifically devoted to promoting the EU are few and far between. If there is a difference in the British case, then it is that in the UK there was never really the same attempt by groups to turn European positions into more pro-active ones, or to integrate more fully the European with the national: instead, the British line has been very instrumental, both for politicians and economic agents.

None of this is to say that pro-EU mobilisation is impossible, but rather it will face persistent difficulties, even as the UK moves towards departure from the organisation. While there will logically be an associated shift in the establishment to a non-member status, this will not address the identificational issue, which will be made all the more complicated should there be very limited barriers to access. That membership was tried, and failed, is something that will cast a long shadow on those that would have the UK join once more.

How to be awkward in the European Union

Article 50 Infographics – updated to end May