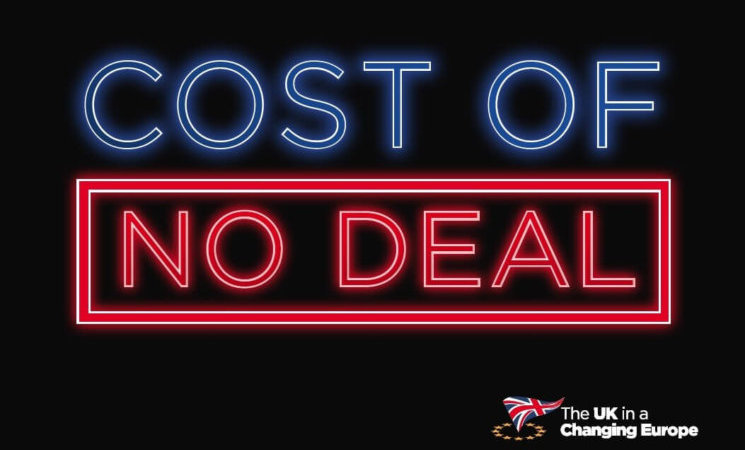 Today, UK in a Changing Europe publishes its report on “The Cost of No Deal“, to which I’ve contributed. Here I consider some of the wider ramifications.

There is one than one way that the Article 50 process might fail to reach an agreement and it is useful to consider each of these in turn, since they each carry quite varied political and reputational costs and benefits.

The most obvious path is that by late 2018 it becomes clear that there has not been much progress on substantive negotiations under Article 50 and that no amount of extension to the two-year period that ends in March 2019 will unblock this. By mutual agreement, both sides let the clock run out and the UK leaves at the end of the period.

Much will turn here on who did what and who blocked what. For both the UK and the EU, there will be considerable political and popular fall-out – all the more given that the start of the negotiations in summer 2017 appears to be relatively constructive – so there will be a strong desire to paint the other side as the spanner in the works.

The UK is unlikely to come out of such a battle of framing well: on the experience to date, it has been much less clear about its desired outcomes or its detailed positions, so the EU will be able to point to its much more public and visible approach as one of being transparent from the start. If the UK had problems with any of these points, then it had two years to make that clear.

Even if provisional agreement is reached on some issues – citizens’ rights, for example – everything is more than likely to lapse in the absence of an overall agreement, so those who thought they might miss the chaos of a ‘no deal’ outcome would also be sucked back in, raising questions about whether either side will make unilateral commitments.

More importantly, the absence of an agreed set of terms for withdrawal will leave the UK with a long list of uncertainties (discussed elsewhere) that will consume the very large majority of governmental and parliamentary business for some years to come, potentially enlivened with cases brought before international courts for compensation.

The failure to secure an agreement will also complicate international trade deals with third parties, who will be uncertain not only about the UK’s legal position, but also about whether it is a desirable negotiating partner: again the shadow of Article 50 will be long and will condition much thinking by others about how much British negotiators can be moved in their preferences.

However, the mutual impasse scenario is one that still leaves a fig-leaf of decency for the UK, since it requires the EU also to become implicated in the decision to run out the clock. It is not hard to imagine the political and media debate in such a situation, where ‘Brussels’ is to blame in large part: only if there has been a substantial organisation of soft- and anti-Brexiteers politically and a swing in public opinion in a similar direction will that translate into further problems for the government of the day. This is not to suggest it will be an easy option, but rather one that is highly fraught and uncertain, with no one response holding the upper hand.

By contrast, if Article 50 ends without agreement because of a unilateral British decision to remove itself from negotiations – maybe even to declare a unilateral and immediate withdrawal from the EU – then all of the costs and problems outlined above will be very much stronger.

In this situation, the uncertainties of the UK’s legal position would be much magnified, raising internal political debate about what might happen next. Of course, for this to come about, there would have to have been some governmental and parliamentary debate, and possibly a vote on the course of action, but given the current make-up of the House of Commons it is hard to see how any majority might operate with any stability or durability. In any case, the pressure from all sectors of business, citizens and others would consume the government to provide some clarity about the status of law and regulation. In addition, third parties might consider that a UK which up-ended its membership of the EU in such a manner might not be one with which to conclude any new treaty commitment.

This is perhaps the key point to take from any consideration of the political and reputational aspects: Brexit is not just about the EU. How the UK acts now and through the rest of the process, whatever the outcome, matters.

This breaks down into three basic elements.

Firstly, the British political system has already been thrown about by Brexit, which is likely to be the defining political event of this period. The choices made by the Conservative party, and Theresa May in particular, have put the country on a track that requires a satisfactory conclusion (i.e. a deal). Without it, there will be further profound dislocations in the party political system and more widespread discontent with the failure of the establishment. Since the UK would be in a position of being outside the EU, the current oppositional views to the government – softening or aborting Brexit all together – would no longer be viable, leaving all sides in a policy cul-de-sac.

Secondly, the EU would still be there. This basic truism is often forgotten in the British debate, but in the absence of a deal, it is inconceivable that there would be no dealings between the UK and the EU. If nothing else, the British Prime Minister and ministers will regularly bump EU counterparts at NATO, UN, G7, WTO and many other meetings: the EU has always been part of a bigger framework. As such, while it might be tempting to blame each other for a failure to agree a deal, this might in turn poison other relationships.

Finally, failure to agree will also compromise what little debate there is about the future path of the UK. The EU referendum did nothing more than conclude that the UK didn’t want to be a member of the EU; it did not set out a clear alternative path. If Article 50 does not produce that path, then the country is likely to find itself in an extended period of dislocation, short on friends, lacking in credibility as an international partner, and generally low on options.

Why you should read the negotiating manual