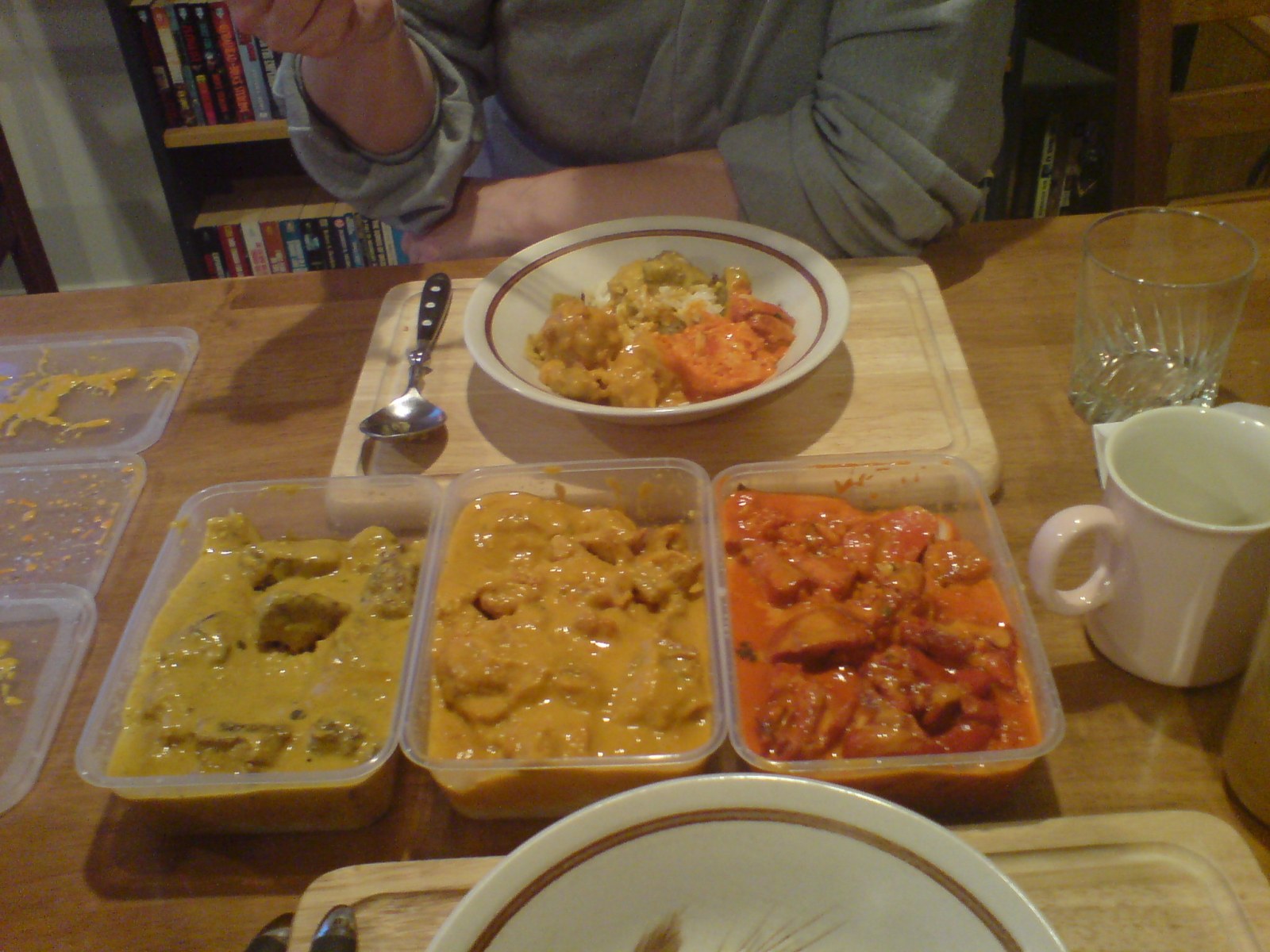 Not the curry in question, just a stock photo of someone who eats off chopping boards…

Like the rest of you, I spent much of Christmas trying hard not to think too hard about Brexit, and for the most part I succeeded.

Right up until about 0100 on 1 January, when I lay awake in bed like some modern-day Scrooge, thinking about Brexits to come.

Experience told me that then wasn’t the time to share with loved ones, so I’ve saved it up for you lot instead.

For reasons that needn’t bother us here, we stayed in on New Year’s Eve: this became the plan relatively late in the day, but we put into effect some options. a contingency, if you will.

That contingency centred on ordering a curry from our regular provider. For context, they deliver super-fast (current record is 20 minutes and the mean is only about 10 minutes more), the food is always really good, and we’ve never had problems before.

Of course, we knew that NYE was likely to be a bit different, as others might have had the same idea as us, so we called at 6.30 to order early: we’d cover the gap to midnight with movies and family board games (it’s non-stop fun round ours).

After an hour-and-a-half, I tried calling the curry house for an indication of when the curry might arrive. Both numbers were engaged, and remained engaged every one of the times we tried for the next hour or more.

Initially, this wasn’t a problem, but by the time 9 o’clock was heaving into view, we were talking about further contingencies: trying to piece together something from the (rather bare) cupboard, basically, since no one was in a condition to drive anywhere, and shops and restaurants would be closed.

Just as we were about to get going on cooking some plain pasta, the doorbell rang. The curry was there, delivered by an apologetic guy who explained that he’d been drafted in at 8 o’clock to help with the backlog of deliveries.

Obviously, our frustration was tempered by the smell of the food, so down we sat to eat. Whereupon it become apparent that the curry had been prepared with its usual speed and efficiency. At 6.30.

Fun through it was to observe the younger members of the family compete on how far they could bend their poppadoms (very far, BTW), it did rob the meal of something (enjoyable poppadoms, mainly), as did the missing bits of the order.

So middle-class, so what?

You don’t care about my curry, and nor should you: we eventually got a meal that still tasted good for the very large majority of its parts, plus we made the getting-to-midnight bit of NYE quite a bit simpler.

But for me, laying there some hours later, it underlined some key points about contingency planning (because that’s the crazy-fun kind of guy I am).

Most obviously, contingencies need preparation: the more critical the situation, the less scope there is for making things up as you go, there and then. We’d not planned for no-curry, but we had some food in the house: if we’d been dealing with something involving a system critical to life, then we’d have made absolutely sure we had everything in place, plus back-ups.

But the evening also highlights another key part of contingency planning: the interconnectedness of processes. Put differently, there’s stuff you can control and stuff you can’t, so you either need to bring enough under your control to make your contingency work or you need to get others to also prepare for the contingency.

In the case of the curry, we’d assumed the curry place would have enough experience of NYE demand to maintain their usual service provision. And they mostly did: the food was prepared promptly and largely correctly. But there was a bottle-neck in the deliveries: the reason could have been any of  of several factors, but the capacity to unblock the problem was evidently limited. In addition, the general nature of the problem exacerbated the problem, as lots of people were obviously trying to phone in and find out what was happening with their orders, making it harder to provide that information to others.

All of which is to say that planning for even the mundane can be difficult.

And Brexit is not mundane at all: it’s systemic, it’s profound in its effects and it contains a high degree of uncertainty.

This was all thrown into some relief over Christmas by the story of the plans for cross-Channel ferries.

The government had spent £100m on securing extra capacity on routes beyond Dover-Calais, to try and reduce some of the bottle-necking that will likely ensue in a no-deal scenario. Most of that money went to established providers, but £14m went to a ‘start-up’, planning to run Ramsgate-Oostende services, but not actually yet in possession of a vessel.

Quite aside for the process issues involved – the government bypassed tendering for all this – we can see the same problems as with my curry.

At the most mundane level, the company will need suitably skilled personnel to sail, dock and load the ferries.

Modern economic, social and political systems are characterised by these kinds of networks of different individuals and organisations, working with and across each other. To expect that any one of these – even a government – to be able (let alone willing) to cover all the risk and all the possible contingencies is at best misguided, and at worse highly problematic.

As we roll towards March, we’re going to see many more cases like the ferries, where the systemic issues and bottle-necks become apparent, alongside the limited capacity of anyone to address them.

That doesn’t mean we’re helpless, but the more there is an understanding of what is and isn’t realistic to expect, the better everyone can manage their expectations and work towards finding resolutions.

Process and outcome in Brexit