One of the most prestigious, diverse and frequently consulted archives held by Archives & Special Collections is that of Rudolf Laban, now considered the 20th Century’s foremost movement theorist. Laban had a huge impact on not only dance, which he is best known for, but movement theory more generally with aspects of his approaches adapted and developed for use in a variety of contexts.  Laban led a fascinating life just a small part of which is outlined here.

Born in Bratislava in 1879, part of the Austro-Hungarian Empire, to a military family, dance and drama featured in Laban’s youth and teenage years through social dance which was part of the culture. However, he also came into contact with the arts through helping at the city theatre and founding a drama club. Despite the expectations that he would follow his father into the military, Laban chose to study art in Munich and Paris during 1900s. In the artistic environment of Munich from 1910-1914, he had much exposure to dance performances and experimental approaches to dance, a scene which he became a part of, and he also directed carnival movement to earn money. 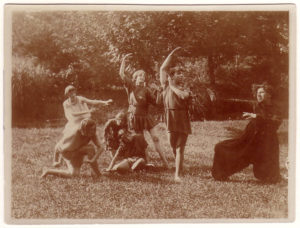 In Switzerland during the 1910s, he worked with an experimental artists’ community at Monte Verità, Ascona and one of the dancers he worked with was Mary Wigman. Their collaboration led to a new dance style, Ausdruckstanz or German Expressionist Dance, which became the dominant dance style of central Europe in the 1920s and 1930s.  Laban was generally interested in observing human movement and later developed a method of notating (writing down using an in-depth system of symbols – Labanotation) and analysing dance and movement (choreology). 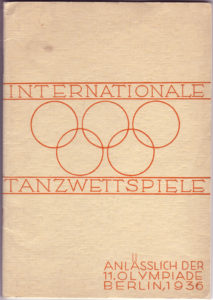 Despite his experimental approaches and his move to free dance from the constraints of prior dance forms and musical structures, Laban became an established figure in dance in Germany and Europe and was head of the Berlin Opera Ballet when the Nazis came to power, holding that position until 1934. Later that year, he was appointed director of the Deutsches Tanzbühne, organising performances and festivals, choreographing and promoting German dancers. Notably, alongside the 1936 Berlin Olympics, Laban was commissioned to direct a celebration of German folk dance, to organize a Great International Dance Competition and to open a new open-air theatre, Dietrich Eckart Freilichtbühne, with a performance of German Dance. He planned a huge event, training over a thousand dancers in 22 ‘movement choirs’ for his production Vom Tauwind und der Neuen Freude (Spring Wind and the New Joy).  Alas, after the final dress rehearsal Dr Josef Goebbels, Reich Minister of Propaganda, prohibited the performance of Laban’s work as it did not represent the ideals the regime wished to promote. However, the programme for the event had been created and we do have a copy in our archive. 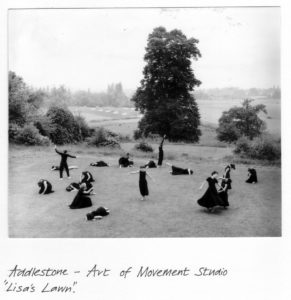 Having fallen out of favour with the regime, Laban left Germany in 1937 and, after some time in Paris, arrived in England in 1938. In poor health, he first joined Kurt Jooss (Ballets Jooss) at Dartington Hall in Devon. In this artistic environment, he made a number of contacts and associations whilst there, including Lisa Ullmann who he worked with in teaching, F.C. Lawrence who he worked with in industry and the Elmhirsts who sought his advice on the use of dance and movement in therapy. In 1942 he and Ullmann moved to Manchester where they opened the Art of Movement Studio in 1946. Many of the students who trained with them went into teaching; the predominance of his principles particularly in teacher training colleges, led Laban-based ‘modern educational dance’ to become the cornerstone of much dance done in PE courses in schools over the next decades. Laban died in Addlestone, Surrey in 1958. 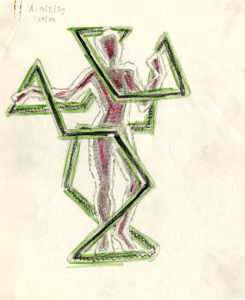 Laban visualised his complex movement theories of space, harmony and dynamics through thousands of drawings held within the Rudolf Laban Archive. There are many written sources to explore these theories but we are privileged to hold so many of his visual explorations within out collections.

In addition, Laban’s natural ability and training as an artist means that the archive also contains many beautiful portraits and holiday drawings of landscapes. In some of these images he blended in caricatures of faces and animals; we believe different animals represented different people, for example Lisa Ullmann (his colleague and companion for the last 20 years of his life) is purported to be characterised as a cat. See how many animals and faces you can see in this image … 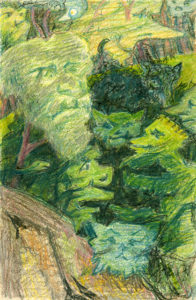 To find out more about this interesting man and his extraordinary work explore our catalogue at http://calmarchivecat.surrey.ac.uk/calmview/

A Year of Discovery in Archives & Special Collections