We love nothing more in the Archives than an interesting enquiry and if it involves food then so much the better. We recently had just that from a member of staff within the University, Nikki Legg, and it began with a recipe for Beef Galantine…

The initial enquiry was to check the link between Battersea College of Technology (our predecessor) and the University of Surrey, as Nikki had been lent a cookery book by a family friend that was published by Battersea College of Technology in 1960 and she was due to go on BBC Surrey radio so needed to be sure. In fact we featured those very cookbooks some time ago on this blog (https://blogs.surrey.ac.uk/archives/2015/01/21/a-taste-of-the-past/) as they offer a fantastic insight into both food and social history and we are really rather proud of their success:

First published in 1914 by Battersea Polytechnic, the Cookery Recipe book was used as a basic primer arising from its domestic science courses. Between then and 1973 it sold over 400,000 copies and the “Battersea Cookbook” as it was often known was a standard textbook for generations of students in schools and colleges. In 1973 a metric version was produced and was the first cookery book in the country in which the recipes had been rebalanced for use with metric standards of weight and volume. Source: 1973 press release, Ref. UA/TA/A3/009/8 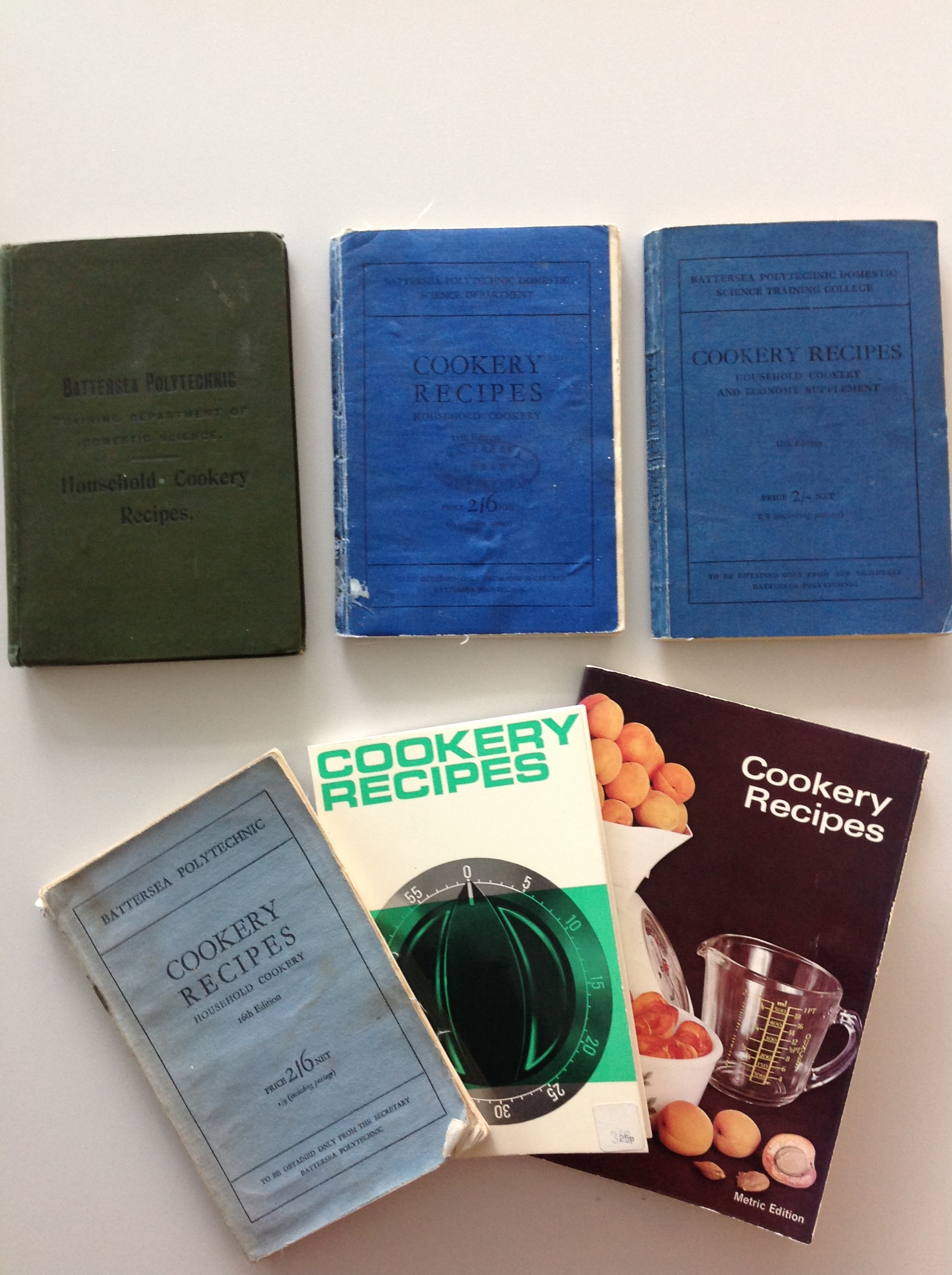 A selection of Cookery Recipes books from the University archives

Where things became interesting was why Nikki wanted to know about the cookbook. It stemmed from her finding a recipe for Beef Galantine in her Nanna’s old recipe book, which coincidentally featured in the 17th edition of the Battersea Cookbook lent to her; her query then was also about whether we had copies of these in the Archives and whether beef galantine featured all the way through different editions to hopefully learn a bit more about its origins. But where did BBC Surrey fit in? Her email explained…

“So, the reason I’m on BBC Surrey today is a bit weird and a bit of a long story. In 2015 my Nanna died, she had dementia and she was a big cook for the whole family. She left behind her handwritten recipe book and her mother’s handwritten recipe book. In 2016 I was looking for something to do and decided to take on the Thames Path Challenge for Dementia UK (a charity I’d never heard of until then). Whilst training for that, Dementia UK put out a competition for a family recipe and I put in my nanna’s ginger fairling recipe and talked about her handwritten book. The recipe won and a month or so ago, I was on BBC Surrey, talking about Nanna, Dementia UK and I took in some of the biscuits.  That interview went well, so now they’ve invited me back with more recipes from Nanna’s book for their Feel Good Friday section.  Today, I’m taking Beef Galantine, blackberry mousse, raspberry mousse and marshmallow crispies.

Because I fell into this, last night a family friend lent Mum this Battersea cookery book and a Canon cookery book from 1949 and just on a whim I tried to see if Galantine was in either of them and it turned out to be in this cookery book.”

Well of course we invited Nikki over to look at the books and to hear more about her fascinating story (beef galantine does indeed feature in all of the copies we hold from the 1920s through to the 1st metric edition published in 1973). She was kind enough to bring her Nanna’s handwritten cook book (pictured below) which certainly was a trip down memory lane – there is something so evocative about seeing old cuttings and recipes, especially those belonging to family members, it really was a privilege to see. 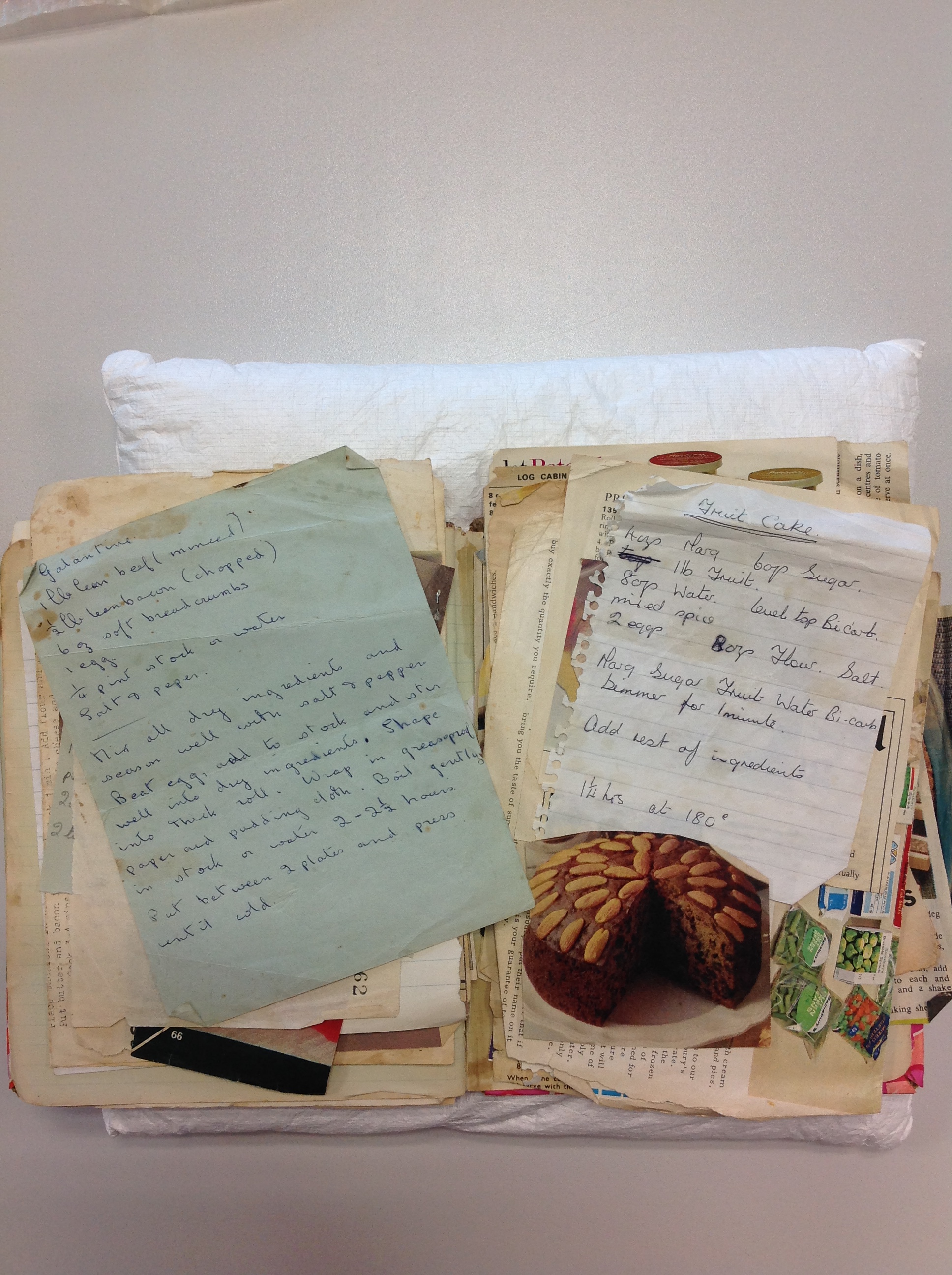 So, all in all, a very interesting enquiry with a charming tale behind it.

Do you have any memories of the Battersea Cookbook? Perhaps you own a copy? Email archives@surrey.ac.uk with your stories, we’d love to hear from you!