Another installment from our volunteer Graham, this time an insight into the University Charter…

Virtually all Universities start with a Royal Charter and some of our oldest ones were approved by early monarchs such as King Henry III in 1231 who issued the Charter for Cambridge. 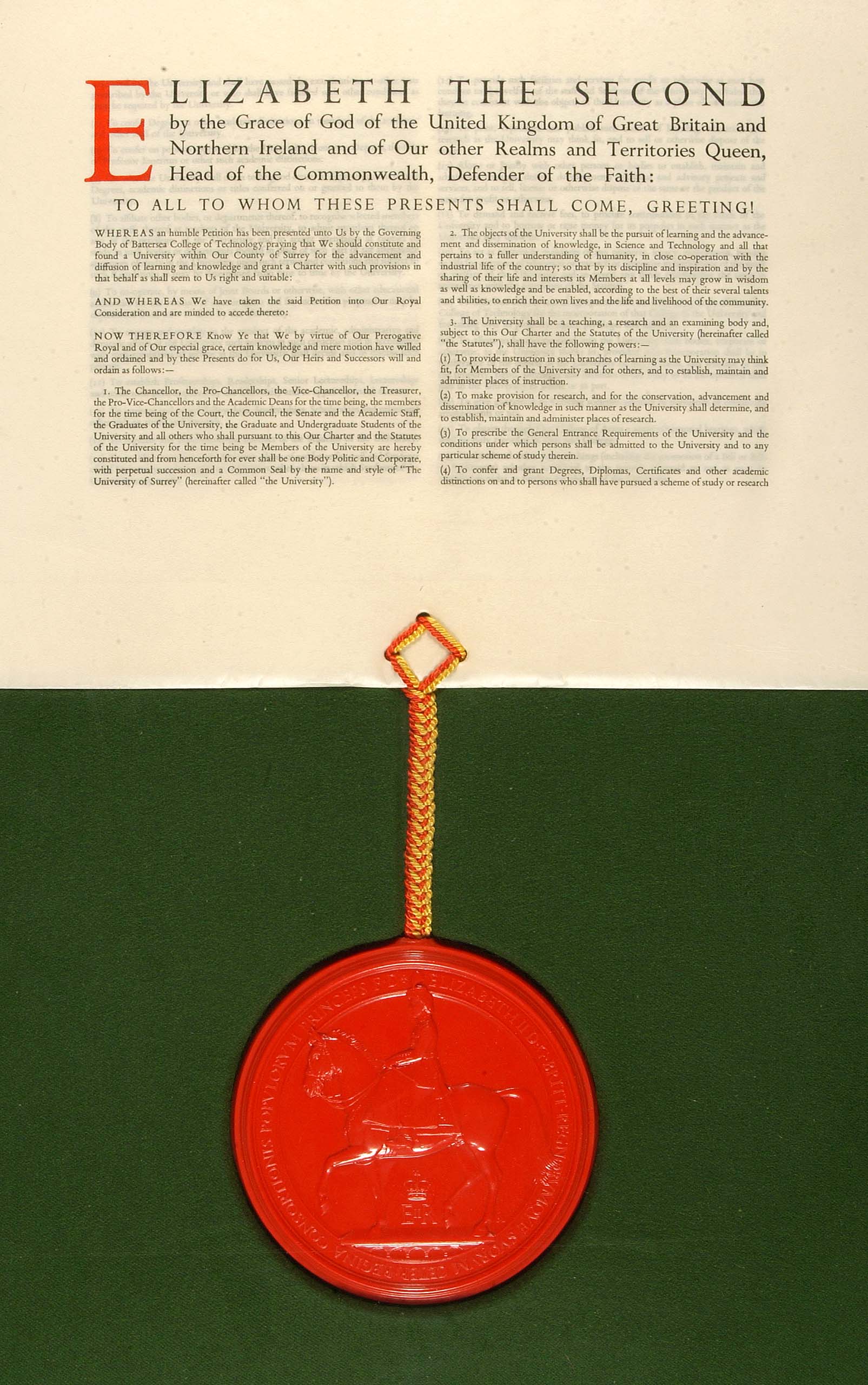 The University of Surrey Charter, 1966

Our University’s Charter received Royal Approval from our present Queen on 9th. September 1966 and was on display at the recent Festival of Wonder (on the 13th May 2017).  Both the Charter and the Grant of the University’s Arms received a lot of interest at the Archives display.

We did keep a sharp eye on the Charter (perhaps I had ancient memories of the Battersea mascot being “borrowed“ by Chelsea Polytechnic) and no one relished the idea of having to approach Her Majesty to ask for another one!

I am sure that all Universities are equally proud of their Charters but I have found that some also have an equivalent Act of the Church Commissioners which brought into being an earlier connected institution.

In 1891, the Commissioners published a Deed announcing a Scheme to establish the Battersea Polytechnic Institute. It defined the educational purpose, the number of Governors and many other details.

Thus on 23rd June 1891, Queen Victoria gave her Royal Approval to the Scheme and so our founding institution was born, 75 years before our next Queen followed suit with the University.  We thus have two Approvals by the most recent Queens since Queen Anne.

Private subscriptions and various grants produced a sum of £ 60,000 for the site and building and £ 2,500 annually for maintenance. These are equivalent to £ 7 million and £ 300,000 in 2017. Of course, the value of land in Battersea was also very much lower than now when “South of the Thames“ has become more desirable.

The land was leasehold for 91 years from March 1886, so it lasted for the duration of the Polytechnic and the College of Advanced Technology and must have needed renewal in 1977 in the hands of Westminster College.

We also have the Commissioners Schemes for other Polytechnic Institutes approved in 1890’s but more research is needed to follow through their progress. They had to get through the “Harold Wilson selection process” (see “A Volunteer among the Cuttings “) to become CAT’s and then Universities before financial restraint stopped some of them from getting that far.

Heritage Open Day at the Archives!