Graham Potter, one of our dedicated volunteers, tells us a bit about what has been keeping him busy over the past couple of years… 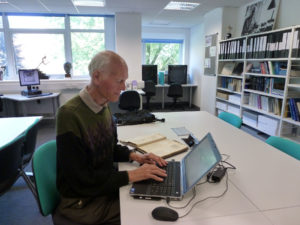 My introduction to the Archives as a volunteer started in June 2015 (see “Thank you to our volunteers“ in this blog).

I started on cataloguing the great many newspaper and journal cuttings which were gathered by the Library staff at Battersea Polytechnic. I dealt with nearly 900 cuttings which ranged from very repetitive advertisements for jobs to ones I found more interesting, affecting higher education in the UK generally.

However, we should remember that all of the cuttings are valuable to researchers, perhaps looking into salaries offered to Polytechnic lecturers, music teachers and nursing instructors.

I was especially pleased to cover the period from before the Polytechnic opened, right up to the time it closed and was re-borne in Guildford. At the beginning, Prince Albert’s “Albert Palace” failed financially and closed but his loss was our gain as the site became available for the building of the Poly.

I arrived there over 60 years later just as Harold Wilson’s government had decided to promote the best Polytechnics to Colleges of Advanced Technology (CAT’s). The cuttings deal with this in detail and I wonder how many now remember that Wilson was a major force in pushing forward higher technical education.  He was concerned that the UK was falling behind other European countries.  Only six years later, he agreed the upgrade of the CAT’s to “Universities of Technology “ and so our University was born.

Ernest Howard Shepard: His Personal Archive – A talk given to visitors from the Guildford Institute