It’s that time of the year again when students begin their applications for campus as well as off-campus accommodation. Currently a second year student, I’ve had a taste of both sides of the spectrum, having lived on Hazel Farm in first year & now currently living in private accommodation. As an international student, campus accommodation is guaranteed throughout your programme at Surrey University. Not many universities have such an arrangement and this has definitely helped in adjusting to life at Surrey.

I vividly remember receiving my conditional offer from Surrey which allowed me to submit an offer for campus accommodation. Campus accommodation varies according to band prices, band A being the cheapest and most basic room and band F being a one-bedroom studio flat. Then began the worry of which band to select and where would I be placed! Most accommodations are on campus except for Hazel Farm and Manor Park which are located off-campus but included as campus accommodation. On the day our Edexcel A-Levels results were released, not only did I get my letter of acceptance to University of Surrey but also received my campus accommodation offer saying I had been placed in Hazel Farm. My first thought was, where on earth is this?? On the campus map, Hazel Farm wasn’t even listed! Only after closer inspection did I notice a little icon in the corner of the map showing Hazel Farm about 2 miles north of the university.

After getting over my initial reaction of not being placed on campus, I began research on Hazel Farm. For one, all Hazel Farmers, as we called ourselves get a free bus pass for a year which was a sweet deal. Hazel Farm is located in a suburban cul-de-sac surrounded by greenery and I must say, very peaceful. I don’t think I would have been as thrilled to be placed in Stag Hill accommodation which is located behind our on campus club, Rubix.

I was very curious who I’d be sharing a house with and so posted on the various Surrey University Freshers 2013-2014 Facebook pages. It was very exciting to speak to my future housemates and as excited first years, we began making plans for Freshers Week. I ended up living with three British girls, a Bulgarian girl and two boys from Germany and China respectively who till this day; I still keep in touch with. My housemates very much became my family here and my support system. Living away from home can become very lonely sometimes and not wanting to feel homesick, I made sure to get to know each of my housemates personally and build friendships with every one of them.

During Deepavali 2013, which is an ancient Hindu festival, known as the Festival of Lights, my housemates knew I was feeling miserably homesick. They came up with a plan for us to make Indian food together on that night and even decorate the house in conjunction with the festival. I was so thankful and grateful to have such wonderful housemates who wanted to make sure I wasn’t feeling sad on this day. We became so close to one another that we decided we couldn’t imagine living without each other and so decided to go onto off-campus accommodation for our second year. 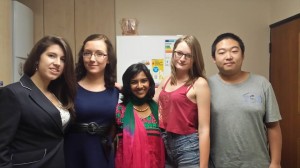 Finding off-campus accommodation was quite a nightmare to be honest; to a point that there were moments I genuinely was convinced I would be homeless & living in a friend’s garage for my second year!

There are quite a few letting agencies in Guildford that specialise with student accommodation & cater to students need. We sent emails enquiring about certain properties listed on the individual agencies websites and booked appointments to view the houses. Usually the agencies enquired regarding our budget as well as the number of tenants per house. This was mainly to filter and find the best suited houses matching our criteria. Booking to view houses was made around our timetables and usually the agencies would pick us up from the university to view the selected houses. Simplylet Guildford is the agency I signed on for with my respective housemates and living off-campus has definitely been an experience; good and bad. No longer are bills included in the rent unlike campus accommodation which makes us scrounge with electricity and heating! This has taught each of us about saving; whether it is making sure the tap isn’t running or simply switching off room lights when we leave. Also, since most private accommodations do not come with cleaners, we have a duty roster which includes everything from cleaning the kitchen and bathroom to vacuuming and moping the house.

Though it has been primarily a good experience living off-campus, I would not do it again especially with the blessing of guaranteed campus accommodation. I have become much more responsible in terms of having to learn about the various housing bills and whatnot, but during revision periods especially, it gets quite tiresome having to walk to the university library and back in temperatures of 0 degrees. Granted, I don’t enjoy walking, but it simply makes life easier being on campus and having everything I need only a stone’s throw away.

Good luck with your accommodation applications!
Till next time,
Selamat tinggal!

Posted on
February 13, 2015
Posted by
as00565
Tagged
#surrey, internationalstudents, malaysia