Hello everyone! It’s Wednesday again so here I am to update the blog. 🙂 Life was as usual for the past whole week packed with studies and revision. There were a lot of assignments and readings to do compared to last semester so I spent most of my free time in the library catching up on my studies. But I’m really glad because the Easter break is coming soon in 3 weeks time where my best friend is coming to visit me all the way from Malaysia and we’ll go travelling around Europe! 😀 Thinking of that makes me really excited as I could finally meet up again with my bestie after not seeing each other for 6 months.  As most of the assignments are due right after Easter break (what a sad case 🙁 ), so I’m currently working really hard to write my assignments and try to finish it up before the Easter break so that I can really enjoy the holiday without the need of worrying about assignments. Do wish me luck guys. 🙂

Well back to the topic of the day:

Before introducing Surrey Decides, I would firstly like to introduce all of you to the University of Surrey’s Student Union (USSU).

The USSU represents University of Surrey’s student on a local and national level and consists of a team of 5 full time sabbatical officers and 21 part time (voluntarily) student officers who are all previous or current student of University of Surrey. The USSU is basically split into four zones; Voice, Activity, Support, and Community, and each zone is led by a full time officer that is a Vice-President and Trustee of the Union, with the President of the USSU being the chair of the Board of Trustee looking over all of the 4 zones. Each zones is then further supported by 5 part time Zone Committee members. Some brief responsibilities of the different roles are explained below:

Union President– Full time officer role, leading the officer team. The figurehead of the Students’ Union. The only sabbatical officer which is also the member of University Council, which means that the President is the number 1 student representative amongst senior members of staff within the University, and the link between the University and the Union.

Vice President Voice: Full time officer role, leading the Voice Zone Committee and responsible for obtaining student opinions on issues that have an impact on student life at Surrey and empowering others to make change.

Vice President Activity: Full time officer role, leading the Activity Zone Committee and ensuring students make the most of their time at Surrey by developing new student activities, increasing participation, and ensuring that any student wanting to take part in student activities can do so without any barriers.

Vice President Support: Full time officer role, leading the Support Zone Committee and promoting good health and wellbeing among students. Main responsibilities include running support campaigns, ensuring the Union has student support in mind in all its activities, and for collating & acting upon student feedback on University support services.

This officer is the lead full-time student representative as they are the only part-time officer that is a member of the Board of Trustees, responsible for chairing the Union Executive, ensuring that policies passed by the Executive Team are delivered and making an impact, and ensuring that the Union’s byelaws are adhered to at all times.

The Raising and Giving (RAG) Chair is responsible for leading the Union’s RAG Committee and coordinating the fundraising activity of the Students’ Union, giving students the opportunity to raise money and awareness for causes that matter to them. The RAG Chair attends the Students’ Union Executive Committee as a non-voting member.

So after a brief introduction of the responsibilities of the USSU officers, I guess all of you already have a brief idea of what does the USSU do. And thus, let’s proceed to Surrey Decides 2016. Basically this is the USSU’s annual election process for new sabbatical officers. Surrey Decides 2016 has started its nominating and campaigning process in Feb’16 and the voting process has started yesterday (1/3/2016) and will be opened till 4/3/2016. The university is currently filled by campaign posters, flyers and banners everywhere whereby all nominated candidates are trying their best to canvass votes from all students on campus. 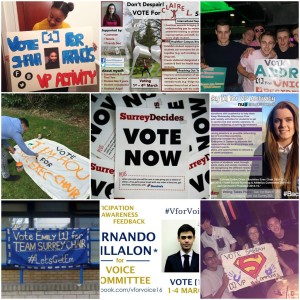 some of the campaign banners and posters

Besides the usual campaign process, there is also the Surrey Decides Question Time which is held at Rubix (the USSU-run campus club) , consisting of 3 nights of pressing questions, lively debate and enthusiastic candidates of the Surrey Decides 2016 seeking to demonstrate to students and potential voters on why they should run the Union. The Question Time is a really good channel for the potential candidates to express themselves and prove to the students that they are the best fit for the post that they are nominated in and also provides them with a chance to interact with the students to further understand the needs and expectation of students towards the nominated post.

Well, as for myself, I haven’t submit my vote for the elections. Most of my postgraduate friends did not even think of voting as by the time when the new sabbatical officers take up their positions in July’16, we will be finishing our degree soon. However, for the benefit of all of you who are planning to come to Surrey this year, I’ll fulfill my responsibility as a good Surrey student and cast my votes later. 😛 Personally I thought that the USSU officers for this year did a really great job as the university is ranked within top 5 for student satisfaction! I sincerely hope that the new officers for the coming year will be even better and bring the student satisfaction level in the university to another level. 🙂

Think that’s all for now. See you all again next Wednesday!

p/s: do email us at malaysia@surrey.ac.uk if you have any further questions regarding student life or University of Surrey and feel free to follow me on instagram at ad3line_koo to keep update with my life in Surrey! 🙂

Weekend away with a HOST family