Hello everyone! How’s everyone doing? Good? Sorry for MIA-ing for the last whole month as I’m away on the roads during the Easter holidays. 😛 So, there is actually a main perk of studying overseas, where we get alot of holidays! 😛 I felt like 3 weeks Christmas break was just not long ago, and then suddenly the 4 weeks Easter break is here again! For undergrads you even have an extra summer break from June to September so that’s even nicer 🙂

So, one whole month of break. Guess what I did? 🙂 Answer is……………… ta da~~ Travelling Europe again of course! When you’re in the UK, travelling EU just become so much more affordable (if you book early and plan well), and since I’m only left with 6 more months here, my goal is to study hard and also work hard and to explore as much of EU as I can (without getting extra pocket money from my parents of course :P)!

Okay back to my main topic today. This holiday I was really blessed to be able to travel to a few places, which includes Paris, Amsterdam and also some parts within the UK. I’ll mainly share my experience of travelling in Paris and Amsterdam in this post and leave the UK part to the next post. So do stay tuned! 🙂

I’m always thankful to have very good and compatible travel partners, which is really a bonus that further makes the trip even fun and enjoyable. Me and 2 girls formed an all girls travel group, whereby one of them is Mannee, my best friend that flew in all the way from Malaysia just to visit me and brought me alot of hometown food that I really missed alot, and also Jerusha, a Canadian girl which originally was also from Malaysia and thus we really had alot of common topic and interests. 🙂 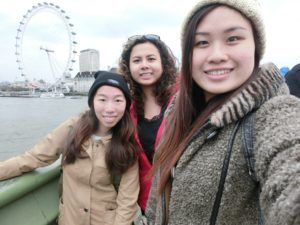 From left: Mannee, Jerusha and Me with the London Eye!

On the day 1 of our trip, we took an early train to London with all our luggage and deposited it at the Victoria Coach Station (that is the cheapest left luggage service I could find in London) as we are departing to Paris by bus at night. As Mannee and Jerusha haven’t been in London before, I became the tour guide of the day and brought them to the major attractions in London such as Big Ben, London Eye, Westminster Abbey, Tower Bridge and others. We had a really great day walking around London and we even had a proper English Fish and Chips for dinner(which is also my first time having a proper Fish and Chips since arriving in the UK)! After dinner, we went back to Victoria Coach Station to wait for our bus to depart to Paris. 🙂

After a long 10 hours bus ride, we finally arrived in Paris! Speaking about Paris, we actually spent 7 days and 6 nights in the beautiful city and managed to explore alot during our stay. Initially, we planned to only spend 5 days in Paris and then proceed to Belgium before continuing on to Amsterdam. However, on the second day of our stay in Paris, we received the news of the bombing attacks in Belgium and then decided to change our itinerary last minute to just spend extra days in Paris and cancel the trip to Belgium. The changes in the itinerary means that we will need to rebook our transports and accomodation which is really troublesome. However, we were really thankful that the owner of the airbnb apartment that we stayed at was really helpful and he even offer to extend our stay in his place with a discounted rate. 🙂 French people are really kind!

Paris, which is also known as city of light or city of love is a really beautiful city. Everything in Paris is just so vintage and romantic. We managed to visit the amazing Eiffel Tower, the Louvre, Arc de Triomphe, Notre Dame Cathedral, Palace of Versailles, the Montmarte area with the famous Moulin Rouge and Basilica Sacre Coeur and also Disneyland Paris! 🙂

We joined a whole day free walking tour provided by Culture Fish to walk around the main attractions in the heart of the city and also area of Montmarte. Our guide was really good and he explained alot on the history of the places and also some of the culture of the French, especially the Parisians to be specific, and this is really useful in helping us to communicate better with the locals. Another thing worth mentioning is also I actually got a self portrait drawn in the streets of Montmarte!

And oh, we also made it to Disneyland Paris! Going to the Disneyland is like a childhood fairytale dream come true. Everything inside the park is so magical and beautiful. The highlight of the park is during the night time, where there is a firework and light show and that was really amazing. I’ll definitely be back again one day. 🙂

It was also Easter Sunday during the week when we are in Paris. And thus, we decided to have a visit to Hillsong Paris for Easter Celebration service! The service was really good and it’s a really one of a kind experience to be able to attend a French speaking service. 🙂 Even the worship songs were translated and sung in French which was really amazing!

Okay, now let the pictures do the story telling. 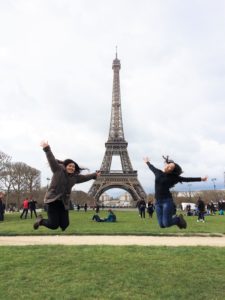 At the Eiffel Tower! 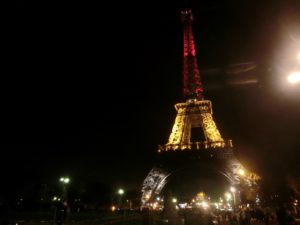 Eiffel Tower at night in remembrance of the Belgium bombing 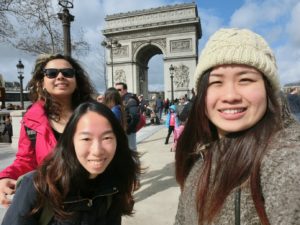 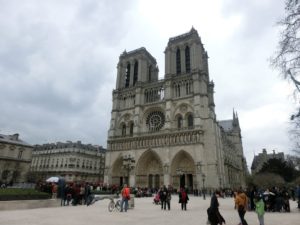 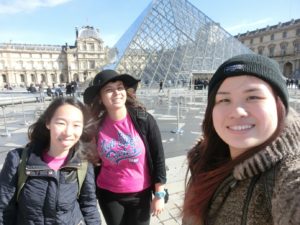 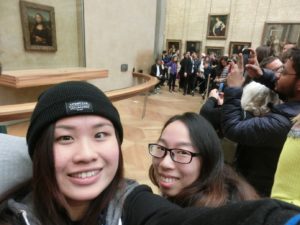 A selfie with Mona Lisa is a MUST! 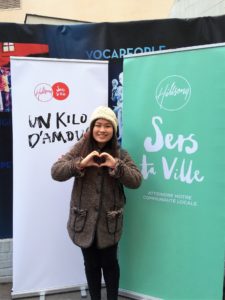 A visit to Hillsong Paris 🙂 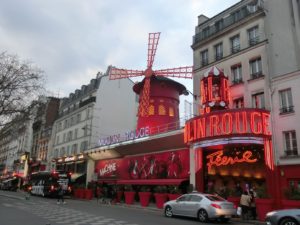 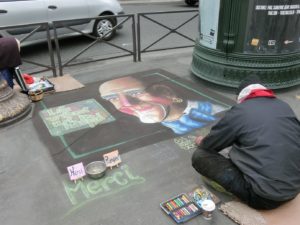 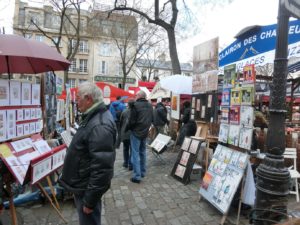 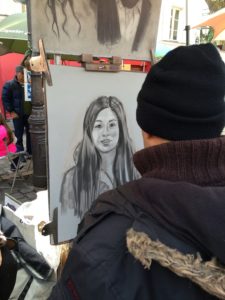 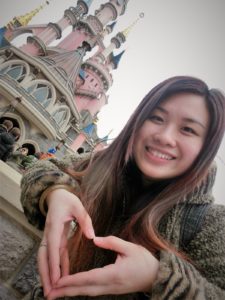 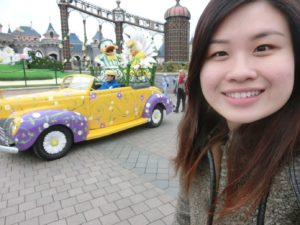 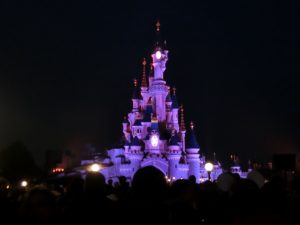 The castle is so beautiful at night!

Moving on to Amsterdam, we actually spent 3 days 2 night in Amsterdam before continuing our journey in the UK. Amsterdam is a really beautiful city despite it is famous for the drugs and prostitution. The canals located in the whole city was just so amazing. Amsterdam is also very famous for the bikes. In Malaysia we are always worried about cars and motorcycles as pedestrians, but in Amsterdam, the amount of bikes is just too massive and more threatening and they even have their own road separated away from the pedestrians! We joined a free walking tour again to explore the city on the first day, and then visited a windmill village nearby called Zaanse Schans on day 2, and finally visited the Keukenhof Gardens which is really famous for the tulips. 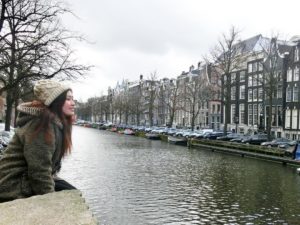 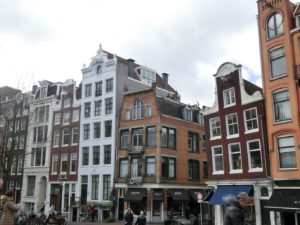 The shapes of the buildings are really unique! 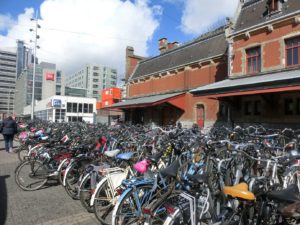 The insane amount of bikes! 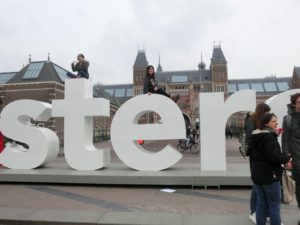 Taking pic on the IAMSTERDAM sign is not easy at all! 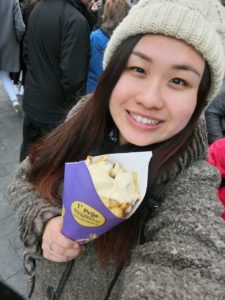 Apparently this is Holland’s no.1 chips! 😛 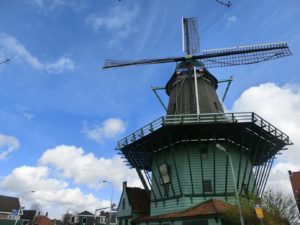 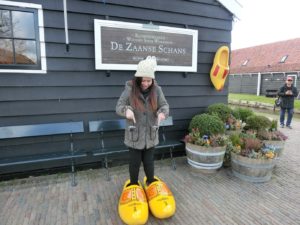 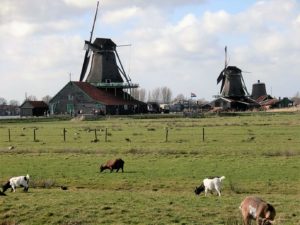 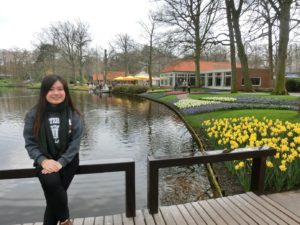 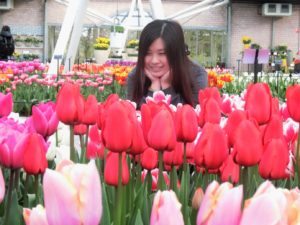 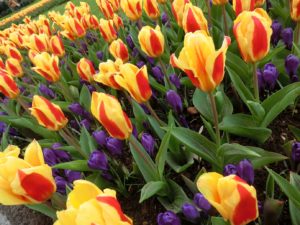 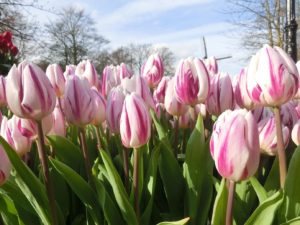 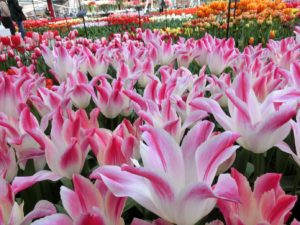 That’s all for today and hope you all enjoyed reading my long long post. See you all again next week and stay tuned for part 2 of the trip!

p/s: do be extra cautious when you’re in Paris especially in the Montmartre area as pickpocket is a very common thing there and I actually lost my phone there during the second day of my trip. 🙁

Happy 90th Birthday to the Queen!