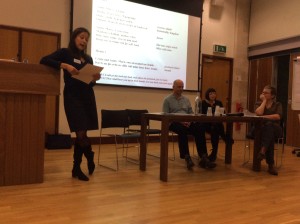 On 21st January, members of the network attended the Women and the Canon Conference, Christ Church, University of Oxford, and took part in a roundtable discussion about the project Women’s Literary Culture and the Medieval English Canon.

The Women and the Canon Conference was a two-day event, organized by a group of postgraduates and early career researchers from the Medieval and Modern Languages and English Faculties at the University of Oxford: Adele Bardazzi, David Bowe, Natalya Din-Kariuki and Julia Caterina Hartley. It is a testimony to the enthusiasm and dedication of the organizing team that the conference was so well attended, with participants from the UK, continental Europe and the USA. The packed programme included, alongside keynote lectures, panel discussions and six parallel sessions, an art exhibition and presentation and a world premiere of a choral piece. The conference was truly interdisciplinary, with papers from a range of different fields, including literature, music, art, publishing, pedagogy, and philosophy.

While the conference covered a spectrum of historical periods up to the present day, there were significant contributions from medievalists. Indeed the first keynote was presented by Elena Lombardi (Balliol College), who gave an excellent and wide-ranging lecture exploring the representation of women as readers in art and literature, and comparing in more detail Abelard and Héloïse, Paolo and Francesca in Dante’s Inferno, and Alison and Jankyn in Chaucer’s ‘Wife of Bath’s Prologue’.  Katherine Travers, a PhD student (NYU) examined the transmission and reception of two medieval lyric poets: the Comtessa di Dia and the Compiuta Donzella di Firenzi; and Charlotte Cooper, a DPhil student (St Edmund’s Hall) explored the canonicity of Christine de Pizan. There were also two papers on St Bridget of Sweden by Maria H. Oen and by Unn Falkeid, both from Stockholm University.

I introduced the Women’s Literary Culture and the Medieval English Canon roundtable by giving an overview of the project, its aims and scope, explaining how the idea had emerged from my own work on medieval women as authors and readers. I suggested that the overwhelmingly male literary canon is often implicitly opposed to an idea of a female tradition. Amy Morgan, a PhD student at the University of Surrey, then spoke about Marie de France and the (male) medieval canon, providing examples from Marie’s Lais. At the end of her presentation, Amy posed the question, ‘To what extent can the texts of women writers be distinguished from those composed by men?’ Christiania Whitehead (Warwick) looked at female vernacular singing in the Hymns of St Goderic. Music and Literature were important strands in the conference, and Christiania’s paper forged a fascinating connection between the disciples, as identified by Ascensión Mazuela-Anguita in her post on the Urban Music blog. Denis Renevey (Lausanne) then spoke about the English medieval translator, Eleanor Hull, in the relation to the Name of Jesus and compilation manuscripts. Sue Niebryzdowski (Bangor) focused on medieval women’s Marion devotion, and specifically Eleanor Percy, Duchess of Buckingham.

In the discussion which followed one important question arose in relation to teaching in particular: would it be possible to challenge the literary canon, dominated as it is by male writers, if we were to focus on genres rather than on the authors? This is question that very much anticipates the theme of the second project workshop on ‘Gender and Genre’ which will take place this summer in Boston in July.

I also took the opportunity to invite members of the audience to participate in the project’s final event, a conference that will be held in Bergen in 2017.

What the Story of St Clare Doesn’t Tell