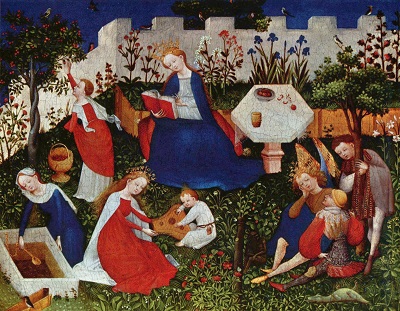 When thinking about medieval women and the enclosed garden, we commonly recall the Song of Solomon or the Song of Songs: ‘hortus conclusus soror mea sponsa hortus conclusus fons signatus’ (4:12). Interpreted by the Church Fathers as an allegory of the mystical union with Christ, the fons signatus became imbued with Marian iconography; the female body was a ‘fountain sealed up’, enclosed in turn by the horticultural surrounds. This tempered layering is a form of claustration in the most etymologically rudimental terms, implying a confining of the female body as much as of the garden. Arguably, the hortus conslusus was used as a tool by which to interpret the often-troubling matter of the Word becoming Christ via female flesh, an issue at the heart of many pre-Reformation theological discourses. This is evident in Bonaventure’s fourth sermon on the Annunciation, which speaks of the creator residing in the tabernacle of the virginal womb that will later become the nuptial chamber. Many fourteenth- and fifteenth-century representations of the Annunciation locate Mary in similar architectural enclosures, from gardens to chambers, often placing the angel Gabriel on the threshold of the structure that Mary inhabits. The below fresco by Fra Angelico for the Convent of San Marco in Florence (c. 1450) is an early example of architectural perspective and spatial awareness used to situate the figures centrally within a semi-exposed chamber, in turn enclosed by the hortus conclusus. 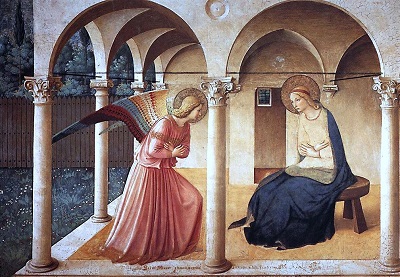 It is the representation of the hortus conclusus as a point of conjunction between the corporeal and the heavenly in which I am most interested. The ‘space’ of the garden is a liminal locus that through cultivation becomes a deliberately organised ‘place’ with signified value. The enclosed garden becomes a way of taming the macrocosmic associated with the eremitical wilderness. Nature, and in turn Mary’s body, is sealed and safely secured; sanctioned by the Church and transformed into a locus amoenus, a pleasant place. It is worth noting, too, that once Jesus has been born, as in the Upper Rhenish Master’s Paradiesgärtlein (above), Mary is decentred in her own hortus conclusus, returning to her reading while Christ is the central focus. In this context, it seems that situating the female body within the enclosed garden is a way to manage its messy implications.

We find this too in The Book of Margery Kempe, when Margery is invited into the Archbishop of Canterbury, Thomas Arundel’s garden at Lambeth. This follows a woman threatening Margery with a heretic’s death by fire: ‘I wold thu wer in Smythfeld, and I wold beryn a fagot to bren the wyth; it is pety that thow levyst’. However, the Archbishop approves of Margery and she is ‘wel comfortyd and strengthyd in hir sowle’. Ecclesiastical authority allays the scrutiny to which Margery’s form of performative piety subjected her, sanctioning her ‘maner of levyng’ that is so preoccupied with devotional images. This private audience in the enclosed garden continues ‘tyl sterrys apperyd in the fyrmament’, and Margery departs. The hortus conclusus is here not only a stage in the settling of the matter of a potentially troublesome female, but also acts as a sanctuary for Margery, relocating her away from her critics. She is literally, as are her religious practices, wrapped up – enclosed – in devotional iconography and imagery.

In her study of the visual and material culture within The Book of Margery Kempe, Laura Varnam examines Margery’s relationship with devotional objects, the crucifix and the pietà specifically. Employing Judith Butler’s formulation of gender identity as enacted – ‘doing’ rather than ‘being’ – she argues that religious identity for medieval women could be created in the same way. Varnam persuasively proposes that Margery makes use of devotional objects to enact a ‘self-fashioning’, with objects becoming ‘events’ through the narratives that they evoke. Shannon McSheffrey has suggested that this focus on imagery was ‘one area of religious practive that women could control and make their own’, while Lollardy could not offer women ‘the same autonomy’. While Varnam examines the church and the domestic space as locations of this ‘repetition of acts’, I am interested in the possibility that the enclosed garden can also facilitate this performance of selfhood.

Just as Margery draws upon the ‘set of meanings’ established in devotional objects, religious women were invited to identify with the imagery of the hortus conclusus. The Middle English translation of St. Catherine of Siena’s Dialogue, for example, was penned as The Orcherd of Syon (c. 1415-20) for the benefit of the nuns at Syon Abbey, and was subsequently published as a printed work by Wynken de Worde so ‘that many relygyous and devoute soules myght be releved and have conforte therby’. This text employs the ‘goostli orcherd’ as a space of spiritual edification, and the translator’s Prologue encourages the reader to ‘walke and se boþe fruyt and herbis’. The reader is here invited to ruminate upon Catherine’s life and revelations in order to cultivate their own religious identity. However, this process rejects Catherine’s own practices of asceticism and repudiation of the senses, instead embracing a multi-sensory, full-body devotional experience: to find profitable fruit, to ‘taste’ and to ‘chewe it wel’, whether it be ‘scharpe’ or ‘bitter’. The hortus conclusus becomes a veritable sensorium, a virtual pilgrimage through the ‘aleyes’ of the orchard and through one’s own faculties. This impact of the hortus conclusus on the senses and on wellbeing, among other interesting avenues, is being explored by Liz Herbert McAvoy’s current project at Swansea University, ‘The Enclosed Garden’.

For women who could not venture on a pilgrimage to the Holy Land as Margery Kempe did, or even when for those who wanted to relive a pilgrimage through sensory memory, this metaphorical image provides an appealing alternative. I’m reminded here of the horti conclusi of the Low Countries: small cabinets of curiosities forming an enclosed garden. Not dissimilar to reliquary boxes, these objects were crafted by nuns, filled and decorated with relics, small clay and wooden figures, silk, pearls, paper quilling, artificial flowers and fruit, patterned knots of thread and textiles. The horti conclusi provide a pilgrimage to paradijs, the archetypal paradise of the Garden, as well as ‘a small sample of the Holy Land’, as Barbara Baert has observed. These mixed media creations also offer a true microcosm of female devotion where, Baert remarks, ‘hands could flourish’ in a kinetically-charged creative process. This is a hybrid devotional object-cum-setting, in which evocative images are enclosed in sacral topography. This is performative expression of identity through the manual creative process, and a citational visual and sensory aid to devotion.

The enclosed garden thus seems to furnish women with both an image and setting through which to cultivate – to create, perform, enact – their religious identity, when they were not afforded the opportunity to do so through, for example, ordination. This in itself is a form of pilgrimage, in which women traverse the paths available to them. A fitting example to refer to is folio 25r from the Book of Hours of Marguerite d’Orléans, in which the central image shows Marguerite praying to the Virgin and Child, while the large margins are filled with illuminated horticulture, a path embedded with Marguerite and her entourage weaving their way through vegetation on a pilgrimage to Santiago de Compostela. Marguerite is here enclosed by the layered images, a flowery border enwrapping the domestic space in which she is praying, enveloped in turn by the floral margins, and finally bound within the quires of the book itself. This enclosure, I believe, does more than simply confine the female body, but situates it within liminal spaces charged with potential, most significantly the potential for movement, to return to the kinetic image of cultivation. The hortus conclusus, as an intersection between heaven and earth, seems to lend power to that which resides on thresholds or on peripheries. Inseparable from the visual and the material, it is referential and highly evocative, offering women the opportunity to cultivate and enact an intensely formative pilgrimage in the margins. 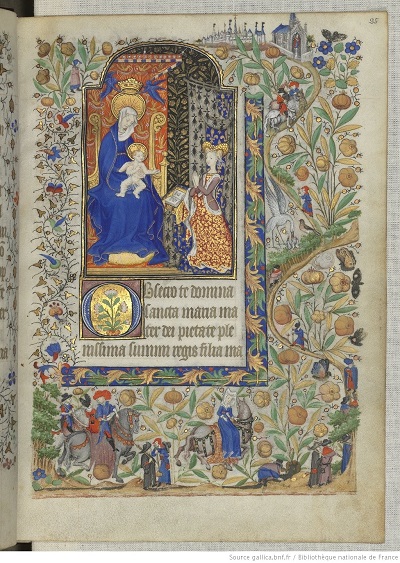