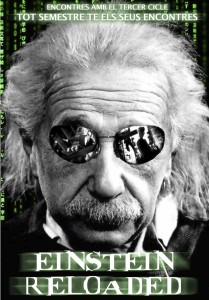 I’m from Barcelona (and I really mean it, unlike the Swedish band). Most of you might know the city for its prodigious football team, its gorgeous architectural masterpieces or its unique gastronomical scene. But Barcelona is also a key player in the international scientific scene. Among others, the city is a hub for biosciences, hosts world-leading photonics labs and, my personal favourite, hides a powerful supercomputer in a Bond villain location. There is a scientific buzz to the city, and I like to think that I contributed a tiny bit to it.

Back in 2003, shortly after I started my PhD at the University of Barcelona, I felt somewhat frustrated. My undergraduate years, studying a wide variety of physics topics, were over. From now on, it seemed, I had to focus on a very specific issue to stay at the forefront of what looked like a tiny research field. To make matters worse, I really liked my own research, but I had no chance to let other people know about it.

I soon realised, however, that I wasn’t alone. Fellow PhD students from other research fields felt equally bad. Together with two other colleagues, I set out to build a bridge between the undergraduate and the PhD worlds. We found a fitting solution: a series of seminars given by PhD students to an audience of undergraduate students. The undergrads were happy to see researchers, only a few years older than them, talking about cutting-edge research in exciting terms. The PhD students, in turn, could use the talks to practice their outreach skills, talk to others about their research and, hopefully, release some of their frustration.

We summoned the inner geek of all physics students, and called our series of talks Close Encounters of the PhD Kind. We actually used the Catalan translation, so the talks soon became known as “Encontres”. We created some eye-catching posters and geeky printed materials. The first edition, in early 2004, had 6 talks on topics ranging from nanoguitars to black holes. It was a success, so we decided to organise another series of talks for the following semester. Much to everyone’s surprise, the Encontres lived on. Year after year, eager undergrads attended the talks and PhD students explained their research. Subsequent generations of physics PhD students took over the challenge of organising further series of Encontres, focused on different topics from literature to catastrophes.

A few days before Christmas, I flew back to Barcelona to attend the tenth-year anniversary ceremony of the Encontres. I learned that over 1,000 students had attended the talks, more than I would have ever expected. It was good to meet with old colleagues and get to know the new generations of organisers. But, mostly, it is great to see that learning physics in a different way can become a well-established tradition. Should we start it at Surrey?

Posted on
January 3, 2014
Posted by
Guest
Posted in
General, Life in the Department

The Miseducation of E. Coli