So that was it, the big debate, in all its BBC Two glory. I think we all learnt something from it. For myself, I learnt that I’m almost exactly 10 years younger than Nigel Farage and that both he and Nick Clegg need to sack the people who write their “jokes.” Otherwise, I have to confess I was unmoved by the debates between the two men.

Obviously, this is churlish of me, given that I have spent much time decrying the level of debate in the UK on the European Union and have repeatedly asked that politicians (and others) step up to the plate to draw out a more nuanced picture of membership. In that sense, I do have to credit Clegg’s initial offer of a televised debate has having at least a semblance of this behind it.

Not consider the way in which we talk about the debates, the language of winning.

All the coverage I have seen talks about the polling, the large margins by which Farage was seen to have beaten Clegg (for example, Dan Hannan or The Guardian, to take contrasting positions). The relevant metric is all about who is convincing, who engages. 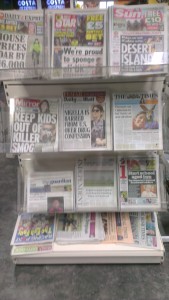 Those front pages in full…

That’s fine, up to a point, but it very much reinforces the view that this is a binary decision: in/out, winner/loser. That might seem to make for easy communication of a difficult subject, but it ignores the multiplicity of options that exist.

As such, I was actually more taken with the (not at all coincidentally) simultaneous publication by Open Europe of their ‘Gaming Europe’s Future‘ report, based on their war-game run last December. While there are any number of exceptions one could take with that exercise, the conclusions of the report represent a fairly well-measured understanding of the limitations of Britain’s position, both now and looking ahead to any renegotiation. In particular, the message one might take – in light of the TV debate – is that there needs to be an attitudinal shift in the framing of any debate.

And this is the real take-away from last night, the sense that this might be the debate we’ll get. No great discussion of the details, but rather general claims about participation or democracy: positions, rather than knowledge.

In advance of this, I voiced the same concerns, and to judge by today’s front pages, I don’t see much cause to change my mind on this. Rather than creating a space for discussion and reflection, the debates have allowed people to out-source their thinking.

Nick Clegg is – conveniently – a good example of this. Remember the 2010 debates, in the run-up to the general election? Yes, you probably do. But do you remember any of the details? Probably not. But probably you remember everyone ‘agreeing with Nick’. That was about policy points, but what those might be are lost in the mists of time to most of us, so the function of this is effectively to say “we agree on policy, so select who you like best.”

We won’t be in the same situation here, since no one will agree on policy, but personality factors will still weigh large. And with that in mind, the absence of Cameron and Miliband is telling, for then it would have shifted the weight of the debate from the binary view.

If the UK is to find its way on Europe – any way – then it needs to start talking properly about what that means, both generally and specifically. If last night’s debate can be a springboard, then that’s great. But if it doesn’t then we will have to try something else, for it is too important a matter to continue to be left on the side.

Meaning in Occupation: A Westerner’s View of the West Bank

NATO the ‘Men-Only Club’? A consideration of UNSCR 1325