A recent Foreign Policy article called NATO the ‘Men Only Club’, while this analogy has some obvious traction and the article made some important points (specifically the link between NATO’s values and representation) the analysis lacked a consideration of NATO’s commitment to UNSCR 1325 which specifically calls for the representation of women in decision making in peace and security. In this blog I will draw out the issues related to women’s representation problematising the association of women with change, women as championing women’s issues and finally, ask just who can act for women? 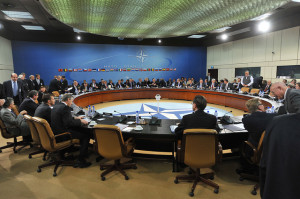 NATO’s Defence Ministers are now made up of 5 women (Albania, Germany, Norway, Netherlands, and Italy) and 22 men. The increase in the number of women Defence Ministers within NATO reflects advances in gender equality at the national level. Yet, the attention given to the appointment of 5 women as Defence Ministers is as indicative of the challenges facing women in international security as is their absence from decision making roles.

A photo of the (then four) women Defence Ministers tweeted by Sweden’s Foreign Minister Carl Bildt with the caption ‘True Power Girls’ went viral in February. The response to this picture is symbolic of some of the difficulties women face in such public roles and Bildt was rightly criticised for the condescending caption which accompanied the photo. In essence the photo (and reaction to it) served to exceptionalise these women and allowed the coverage to overlook some of the more pressing issues associated with their presence. Women remain underrepresented in decision making roles at NATO despite NATO’s commitment to UNSCR 1325.

The appointment of women to these positions is something which must be contextualised to each country and is a result of national politics. However, from a NATO perspective the appointment of 5 women Defence Ministers can only be positive given the Alliance’s commitment to UNSCR 1325, which stipulates a commitment to increasing the participation of women in peace and security. This also mirrors a wider move by NATO to support an increase in the representation of women in NATO forces (even if little progress has been made to date).

Women representing change
Women in public office face a particular set of demands which they must navigate within their role. These expectations are exacerbated when they fill positions in arenas dominated by men – such as defence and security. Primary among these is a presumption that because they are women they will act for women – their politics are read from their bodies and because their presence is new within these spaces women are seen to represent change.

In the NATO context there is still a long way to go before the organisation reaches a critical mass of women in decision making roles, women still only make up 18% of the 28 NATO Defence Ministers and at the North Atlantic Council just 11% are women. Most significantly there has yet to be a woman flag officer (the highest ranking positions) within NATO forces and there are currently no women on NATO’s Military Committee. As an intergovernmental organisation NATO is dependent upon member states commitment to increasing the representation of women in peace and security but NATO can play an important role in facilitating progress towards this goal through lesson sharing.

This is not to downplay the impact that the presence of 5 women Defence Ministers at NATO meetings will have. The very presence of women’s bodies will be a challenge to a defence and security institution seen as the last bastion of masculinity.

If we look to the national level then we find that the majority of NATO members have never had a woman as a defence minister. The five women currently in post therefore represent something of an exception with NATO. Four of the five have made history by becoming the first women to take up the post within their respective countries. These are Mimi Kodheli (Albania), Ursula von der Leyen (Germany) and Jeanine Hennis-Plasschaert (Netherlands) and Roberta Pinotti (Italy). However and perhaps unsurprisingly Norway is the exception here and Ine Maire Eriksen Soreide is the fifth women to take the role of Defence Minister.

The national context and individual motivations of the defence ministers must be taken into consideration in evaluating whether these women can or will act for women in their role and the impact this will have upon NATO.

The Netherlands has committed to actively promoting UNSCR 1325 at NATO in their National Action Plan and Jeanine Hennis-Plasschaert is likely to continue her support for gender equality which was evident during her time as a Member of the European Parliament.

Norway has also committed to supporting UNSCR 1325 at an international level through international organisations such NATO and Ine Maire Eriksen Soreide will support this agenda.

Germany’s Ursula von der Leyen has supported gender quotas and has defined herself as a feminist. During Germany’s membership of the UN Security Council Germany supported a comprehensive consideration of UNSCR 1325 in Security Council decisions and the National Action Plan states they are supportive of the agenda at NATO.

Italy’s Roberta Pinotti does not have a personal record of championing women’s rights and is operating within a particularly challenging national political environment for women’s rights. However, Italy does have a record of supporting women, peace and security issues at an international level and last year supported the UK’s sponsorship of UNSCR 2106 on sexual violence in conflict through the Security Council. In addition Italy plays a role in supporting NATO’s implementation of UNSCR 1325 and has sponsored the position of ‎Gender Advisor to the NATO Special Representative for Women, Peace and Security.

Albania’s Mimi Kodheli does have a record of supporting women’s rights and gender equality at a national level but we have yet to see how this will be translated into her work as Defence Minister. To date Albania has not adopted a National Action Plan to support the implementation of UNSCR 1325 and has not taken an active role in supporting women’s rights internationally.

The link between women’s representation and women’s issues
The increased presence of women holding defence or military portfolios does not necessarily correlate with greater attention being given to women’s issues. We should be cautious about making an assumption that because they are women they will support ‘women’s issues’. Rather, as with any Minister regardless of their gender it is necessary to look at their track record on supporting women’s rights and the national commitment to UNSCR 1325 and increasing the representation of women in the military.

The effective implementation of UNSCR 1325 and the related goal of increasing the representation of women in armed forces are not issues which will be addressed merely by the presence of women in defence roles. Norway for example has had five women Defence Ministers and has also actively sought to increase the representation of women in their armed forces through measures including removing all combat exclusions and extending conscription to include both men and women. Despite these measures women make up less than 10% of Norway’s armed forces and few women have advanced to senior positions. This indicates that what is required is more than just a woman as a figurehead of the defence ministry but a comprehensive policy addressing the obstacles facing women’s representation in the military. However, the presence of femocrats (either men or women) in decision making roles championing women’s rights can facilitate the adoption of a transformative agenda on peace and security.

Women acting for women?
There is no evidence to suggest that women in public office will hold different attitudes to military policy just because they are women. Rather, it is necessary to look at their individual record on such issues.

If we take Hillary Clinton for example we find someone who has been a supporter of women’s rights throughout her career and continues to champion the cause. Most recently Clinton awarded the inaugural Hillary Rodham Clinton Award for Advancing Women in Peace and Security and among the recipients was NATO’s Secretary General Anders Fogh Rasmussen. This was a clever move by Clinton because in recognising the progress NATO has made in its support for UNSCR 1325 to date Clinton has limited the possibility for NATO to backtrack on this commitment in the future. Should Clinton decide to run for the presidency in 2016 it is likely that women’s rights will continue to underpin her approach to foreign policy.

Angela Merkel on the other hand has been far more passive on the issue of women’s rights during her time as Chancellor, choosing to focus on human rights more broadly. This is reflected in the reluctance of Germany to develop a National Action Plan on UNSCR 1325 because it felt the issues were covered in other documents and it was not until 2012 that Germany did so.

There is a danger in focusing upon only women’s record on women’s rights that we make an assumption that only women can act for women. In the UK, the Secretary of State for Foreign and Commonwealth Affairs – William Hague – has been an active proponent of women’s rights (and another recipient of the Hillary Clinton Award for Advancing Women in Peace and Security). The UK played a pivotal role during their presidency of the UN Security Council last year where they sponsored UNSCR 2106 on sexual violence in conflict. In June the UK will host an international conference on sexual violence in conflict and it is likely that the UK will continue its support for the issue when it hosts the NATO Summit in September.

The examples of Clinton, Merkel and Hague highlight the importance of not essentalising women in order to make presumptions on their policy commitments based upon their gender.

Nick, Nigel, Europe and us: A raging debate?