In the run up to NATO’s  Summit in Wales (September 4th to 5th) I will be blogging on issues related to the future of the Alliance, with a particular focus on the place of UNSCR 1325 on women, peace and security on the agenda. You can read my first blog on the topic here.

As the NATO Summit begins in Newport  we have some indication of how women, peace and security (WPS)  and UNSCR 1325 will feature on the agenda. The agenda released ahead of the Summit indicated that it will be an issue for discussion today when Heads of State and Government meet to discuss Afghanistan. However, the Summit has already been criticised for leaving Afghan women outside of these discussions. 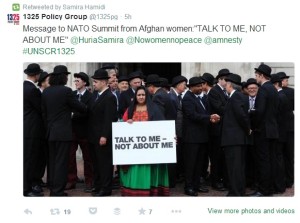 In addition, William Hague has confirmed that he will host a meeting on ‘women’s role in ending sexual violence in conflict’ and ‘creating sustainable peace’. Although it is not clear who will attend this meeting and why the focus is not on the role of NATO in promoting this agenda.

So what are we likely to see at the end of this Summit in respect of the women, peace and security agenda? We know that the new Secretary General’s Special Representative on Women, Peace and Security has been appointed and will be Dutch diplomat Marriët Schuurman (although there appears to have been no official NATO announcement yet). It is also likely that leaders will endorse NATO’s new policy on women, peace and security and the corresponding Action Plan which has been released to the public for the first time. The policy was adopted in conjunction with NATO partners who form part of the Euro-Atlantic Partnership Council (EAPC) so it could feature here on the agenda.

This is not to say that WPS will not feature further in the Summit outcomes. At NATO’s last Summit in Chicago 2012 the commissioning of a comprehensive review of NATO’s implementation of UNSCR 1325 took many in the NATO staff by surprise. This was a testament of the commitment of the Allies to the women, peace and security agenda. However, 2 years on and the international security situation has changed beyond comparison. Russia will undoubtedly dominate proceedings (as the NATO After Wales Conference on Tuesday demonstrated) and other issues will inevitably be sidelined. Despite this the significant progress NATO has made in implementing the women, peace and security agenda over the last two years makes it something of a ‘good news story’ for the Alliance and one which is testament to the importance of the issue on NATO’s agenda. We can be fairly certain WPS will feature in the Summit communique, what form that will take beyond previous commitments is more difficult to determine.

Wrap up on Day 1: NATO Summit Wales and the Women, Peace and Security Agenda