May’s European elections exposed both the continued appeal of UKIP and the low level of public engagement (0.9% rise in turnout notwithstanding). The Spitzenkandidat row then left Cameron very marginalised, which was then compounded by the nomination of Lord Hill, a man who continues to be most impressive for his lack of visibility. And then the cherry on the cake of Douglas Carswell’s departure for UKIP last week, which look set to give the latter their first proper MP (even if only briefly).

End result? Domestic grief and a growing sense externally that there are limits to what will be put up with.

Unfortunately, none of this is very surprising. Cameron has consistently found himself being manoeuvered on the EU by his backbench, rather than by any strategic plan. 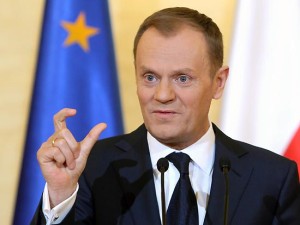 “I’m giving you this much wiggle room…”

All of which makes Donald Tusk’s elevation to President of the European Council seem a bit surprising.

To read the (relatively little amount of) media coverage, Tusk’s selection was a great boost for the UK, given Poland’s generally good relations and economic and security interests that match pretty well. Certainly, Prime Minister’s Questions yesterday didn’t witness any grief on the choice.

But Tusk had been resisted by Cameron previously, and the swallowing of doubts came late in the day. The inference is that Cameron’s doubts about Tusk’s willingness to discuss changes in free movement were offset by Cameron’s recognition that he couldn’t risk another Juncker-style debacle – the unwritten rule of such things being that you get to kick up one fuss, but no more than that – leading to some kind of agreement that there would be some kind of standing down in the rhetoric on free movement (at least until next May).

To be clear, Tusk isn’t a bad choice, any more than Juncker was (and he’s not): the difference lies in the public presentation of policy.

One might make the argument that if the government chose to present its EU policy in more constructive tones – looking for points of agreement, rather than of difference – then it might be able to address both the domestic and external issues mentioned above. The obvious difficulty is that this would require a degree of coherence that looks unlikely, to say the least.

The biggest challenge is the Clacton by-election. With Carswell looking set to win handily, the pressure on Cameron from his party to deal with UKIP can only increase, not least because several backbenchers will feel their seats are more at risk next year. This will then set the tone for the run-in to the general election – unless Scotland provides a very major disruption in a fortnight – and we’ll be back into the “tough on Europe, tough on the causes of Europe”-type grandstanding on all sides.

In the meantime, we will watch the formation of the new Commission from afar, with Hill likely to secure something towards the lower end of his (and British) ambitions (silly rumours also seem to point that way). We’ll watch TTIP negotiations drift into ever more resistance. We’ll watch Eurozone structural reforms peter out. We’ll watch and we’ll do little or nothing about it, because we think it doesn’t matter.

This is perhaps the key delusion of British policy: that we are masters of our own ship, free to roam the high seas. If we can see that we in a busy body of water, where we have to navigate with and around others, then we stand a better chance of getting where we want. The UK has much to offer the EU (as I argue in a piece I’ve been writing this year for publication soon), but that will require a change of approach. To complete the marine metaphor, the dangers often lie below the waterline, where we only discover them when it’s too late.

What next for NATO? Reflections on the Place of the Women, Peace and Security Agenda in a ‘Future Proof Alliance’

NATO Summit Wales: What Next for NATO and the Women, Peace and Security Agenda?