One of the recurring issues with UKIP’s development has been the double-edged sword that is Nigel Farage.

On the one hand, Farage is an exemplary politician, in terms of his connection with people and his ruthlessness in pursuing his agenda within the party.

On the other, he is but one man, and readers will be aware of all the dangers associated with one-man, personalised rule: if nothing else, people have a tendency to die at some point in their lives (usually at the end).

Hence, UKIP (and indeed Farage himself) have been trying in recent times to present a broader set of faces to the public. Here I’d like to present some interim data, as part of a bigger project I’m working on.

The chart below highlights one aspect of this: the profile of different individuals in UKIP’s website news stream between September 2014 and the end of January. 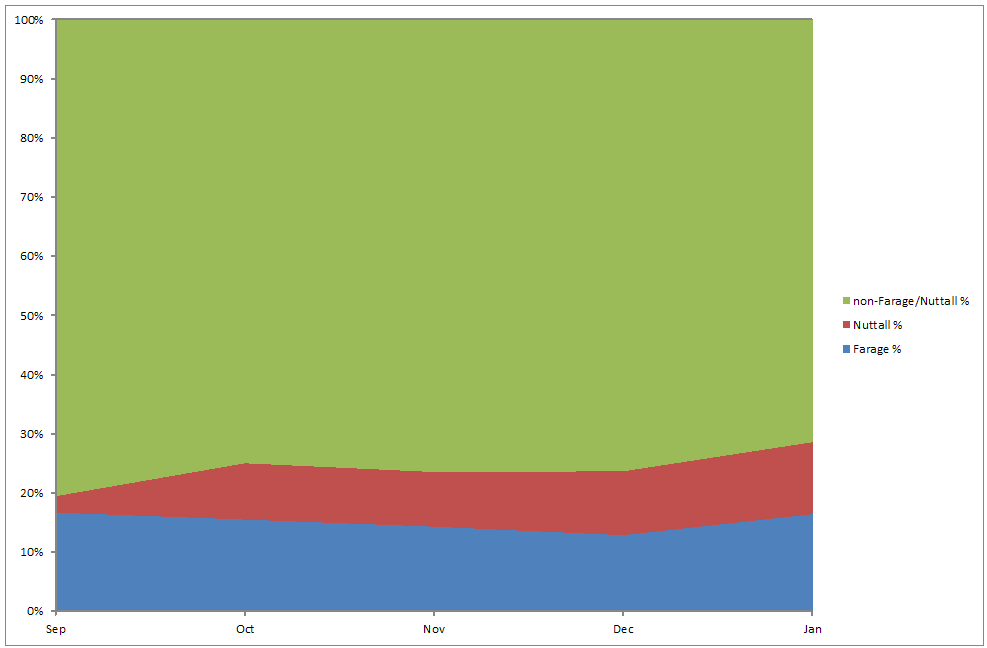 The news stream is one of the party’s main channels of communication and reflects the party’s priorities, rather than simply what the media ask for (although there are some obvious caveats here). With approximately approximately 40 releases per month, the tempo is high and closely connected to the news cycle.

The chart demonstrates how coverage is being kept open: Farage is quoted or mentioned in about a sixth of releases, Paul Nuttall (the deputy leader) in about a tenth of them: thus almost three-quarters of mentions are of individuals away from this pair. In this sense, the party has certainly tried to stick to the policy it first flagged at the Doncaster annual conference last September, of giving a platform to its new raft of spokesmen : indeed, it is striking how many of the releases are precisely about policy issues and the spokesman’s thoughts thereon. The only spokesman not to be quoted during this period was Stuart Agnew, for agriculture, a man currently in the news for his challenge on the animal-stunning policy.

However, while there is diversification, this also has to be balanced by closer inspection of who is quoted. Four individuals make up up about a third of the ‘other’ category in the chart above: Steven Woolfe (Migration); Patrick O’Flynn (Economic Affairs), Jill Seymour (Transport) and Mark Reckless. Reckless is interesting in that the vast bulk of his mentions occur in the run-up to the by-election in October, with scarcely a mention for him (or Douglas Carswell) since. The other three, however, have clearly developed a good cycle of regular copy, feeding off the high profile of their policy areas.

That still leaves a lot of not very active spokesmen from the 20 or so currently so-designated. Again, we can take this partly as a reflection on the news cycle – there hasn’t really much to be said about some issues in recent months. However, it also indicates that UKIP is still not able to make the weather across policy areas: some of the releases now read as pieces of rage against something that has continued to go largely unnoticed (this is an issue I’m working on now, to look at how the media pick up on these releases). But the inactivity also speaks to the party’s difficulty in building up a larger, technically competent team of people to represent it.

It’s telling that among the releases are two notices about senior members stepping down, following scandals. The continuing stream of such events – at all levels in the party – should raise questions about sustainability and the capacity to operate effectively. This is especially true post-May, when the party will likely lose almost all of the opportunities it has to focus attention on its agenda.

In short, the work continues.