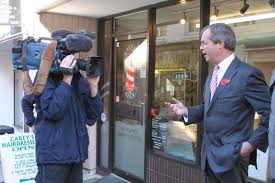 Tomorrow, Channel 4 is showing “UKIP: The First 100 Days“, a drama-documentary about a UKIP government. Having seen a preview, it’s instructive to consider what this is and isn’t about.

Firstly, the programme starts from the premise of a UKIP government. There’s no discussion of how or why this might happen and, for the purpose of the exercise, it’s not really that important: the film-makers are really more interested in seeing how UKIP’s policies and ideas would play out. Those looking for the practicalities of how to engineer a UKIP victory will be disappointed.

Instead, the programme personalises the experience through the eyes of a newly-elected Asian UKIP MP, Deepa, and the tensions she encounters. Put like this, you’d think that the intent would be be expose her to racist or xenophobic actions: the right-on, Channel 4 approach, you might argue. To their credit, while there is an aspect of this, the producers have actually gone in a different direction, and this is worth some more exploration.

As I’ve previously argued, I don’t think that UKIP is a racist party, only that it is attractive to some racists. Certainly, the party leadership has been very consistent in resisting in-roads by the far-right, and in ejecting those with derogatory views, even at a senior level. However, the policies that the party pursues – particularly with regard to immigration – make it an obvious place for those with more radical positions to try and exploit an advantage.

In the film, the end of free movement with the EU and a crack-down on illegal immigrants presages the fundamental difficulty for Deepa, namely the balance between wanting to protect the core values of security and liberty. Ultimately, she finds a resolution between those two, albeit a somewhat ambiguous one, and we are effectively invited to consider how the two values hang together.

In essence, we are being offered as impartial a view of UKIP as could be managed in the situation: by showing both positive and negative aspects, and by bounding the timeframe, the structure is designed to provoke questions and debate, rather than offer answers or opinion.

From my perspective, the value of this programme lies in the way that it exposes the underlying difficulty for the party, namely its lack of coherent ideology.

Again, I’ve long characterised UKIP as a party of negatives: it knows what it doesn’t like, but isn’t so sure about what it does like. Thus, it’s against the EU and it’s against uncontrolled immigration: but to read what few policy documents exist, or listen to public statements, there is not much depth to what should happen instead. Yes, there are calls for a free-trade agreement and for a points-based system of immigration, but these do not coherent and coalesce into an over-arching discourse about how we should live and rule ourselves.

At one level, this really doesn’t matter: it allows for a degree of flexibility and adaptability that has been a key part in its success in recent years: the party – and especially, its leader, Nigel Farage – speaks to (and for) those who see other parties as part of the same clique, uninterested in the lives of those who have been left behind.

But as the party moves into the political mainstream, so it must develop its profile beyond its core messages, to demonstrate its relevance. This was a key reason for the diversification that has taken place over the past decade, away from being a single-issue party, towards one that speaks across the full range of public policy. That this process is still on-going, and so contested, again reflects the lack of consensus: consider the moment where Deepa is explaining the party’s libertarian stance on gay marriage to the local WI.

Of course, the programme is a fiction, an intentional effort to provoke debate. But as we move into the hotter part of the campaign for the May election, we might do well to reflect that UKIP is going to be a notable part of our political system whatever the outcome. The questions that are raised will need answers and how they are resolved will potentially affect us all.