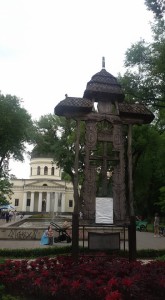 This week I’m in Moldova, for a workshop of our TEMPUS project INOTLES. You’ve probably not been to Moldova, but Chisinau is a very pleasant city around which to walk, albeit one in which the local UNDP office looks like one of the more important buildings.

To be here – in a country that has possibly the lowest GDP per capita in Europe and a geographical location that might best be described as exposed – the world looks a lot different from the view afforded to those living in the UK. Which makes it all the more important to reflect on those differences.

Over the past couple of weeks David Cameron has continued to get his proverbial ducks in a row on the EU referendum. That’s meant both more talks with counterparts elsewhere in the EU and an increasingly fraught passage of the referendum bill through Parliament. That Tory backbenchers are not going to let Cameron get away with anything at all is now very evident, their obstinacy only being encouraged by his apparent unwillingness to defend any position for long.

But the issue for the external observer – perhaps in the Moldovan foreign ministry across the road from where I write – is that the entire enterprise of renegotiation and referendum looks ill-timed and ill-conceived.

For Moldova – and for a lot of other places like it – the EU remains a veritable cornucopia of economic opportunity and safety. This is a country that has suffered at the hands of various forms of external rule, colonialism in all but name. The Transnistria conflict remains frozen after 15 years, and the ructions in Ukraine feel too close for comfort. The EU might be a difficult partner, but at least is one that offers an implicit security guarantee and an institutionalised voice at the table.

That might sound like it’s all well and good for Moldova, but so what for the UK?

The argument would be that the UK is just as exposed as Moldova, albeit for very different reasons. The latter can get by through virtue of being small and having (relatively) small objectives. The former has much bigger objectives – to be a consequential player on the world stage – and so it has to play a different game.

Where the UK has continued to struggle is in its view that the EU is an ‘either/or’ proposition: either you put all your eggs in the one basket with other member states, or you have nothing to do with them.

A moment’s regard to France – still pursuing its own foreign policy – or Germany – still accessing export markets – should demonstrate that the Union is actually a ‘also/and’ organisation: membership is an occasion to further bolster one’s objectives. As I’ve argued here before, European integration can be largely understood as a way for states to secure things that they cannot by themselves.

In addition, there has to be a recognition that the fates of individual European states are bound up together: Moldovans will know this better than Brits, but it’s true for both. As the absolute tragedy of Greece is demonstrating, what happens in one part of the continent matters for everywhere else.

This is not to preach some kind of universalism about European integration, that it accommodates everyone, all the time. However, in a globalising and changing world, the song that drifts across the western Steppe sounds particularly mellifluous: we would do well to listen to it harder across the Channel.

On becoming a National Teaching Fellow

The perception gap: Calais, Greece and Brussels in the British imagination