We have now reached the final, official stage of the EU referendum. In just 10 weeks’ time, we will have a decision on the UK’s relationship with the European Union.

Potentially, this marks a significant stage in the development of the online campaign, which we have been following since January: from now on, there will not only be two officially-designated groups leading the debate (and so logically drawing in more traffic), but all activists will be bound by rules on campaign expenditure (which may enrich or (more likely) diminish activity). As we move through this period, these effects will become more evident.

At the end of last week’s sample period – which runs to midnight on Wednesday – the news about the government’s leaflet was breaking, with much attendant outrage from Leave groups. This drove something of a spike in negative tweets, which we expected would continue into this week’s sample. As can be seen below, that has indeed happened, further bolstered by the break of the Electoral Commission’s decision this Wednesday, which Leave.EU took particular exception to. The upshot is that rates of negative tweeting by Leave.EU and Vote Leave have risen to rates not previously seen. However, given the decision not to pursue legal challenge of the decision, this is probably a passing effect, certainly given the broader maintenance of historic rates of positive tweeting. 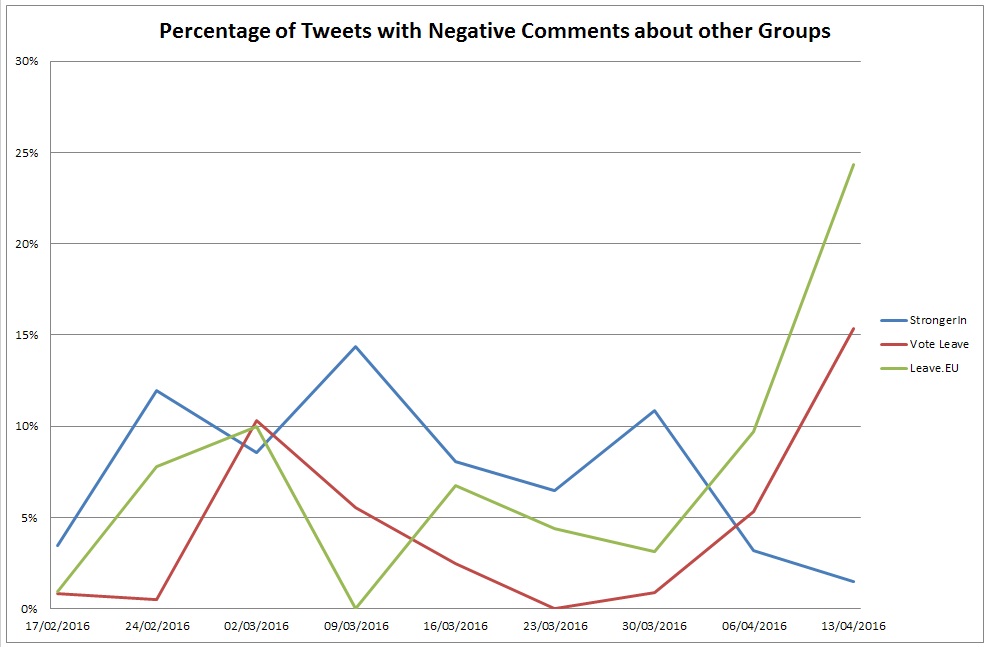 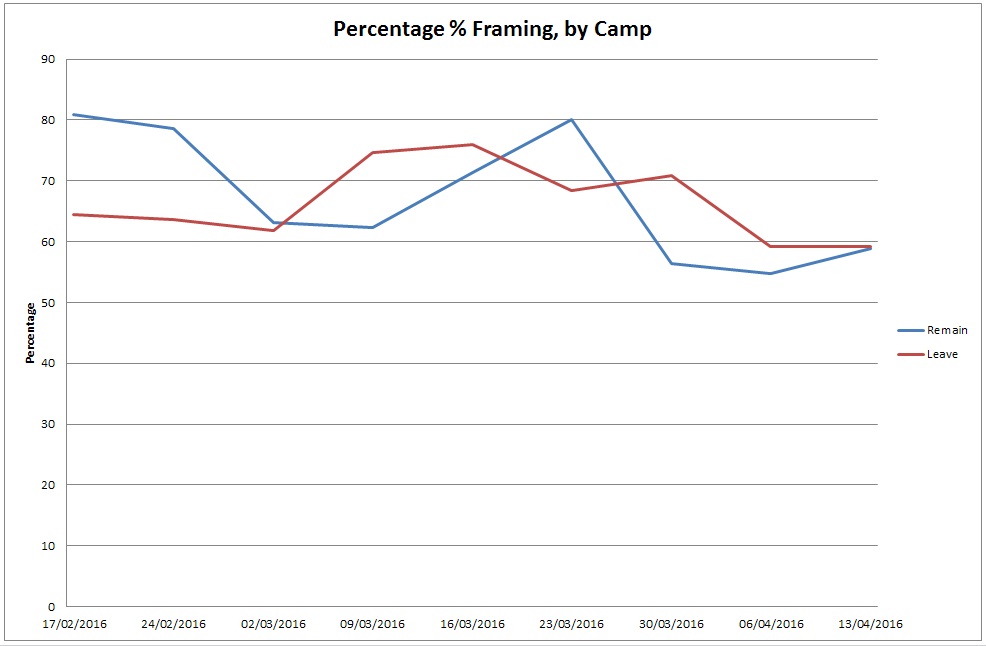 As a further nuance of this, it is also useful to note that while those negative tweets might have increased in volume, this week also saw a sharp downturn in the rates of retweeting of negative comments about other groups. Why this should be is not clear, although the widespread complaint about the government leaflet last week was not matched by this week’s decision: while the former tapped very clearly into messaging about fairness and the wider questioning of David Cameron after the Panama Papers, the latter possibly seemed to be a more esoteric matter, where a group was still selected to represent Leave. In support of that, note how Leave.EU’s overall retweet rate dropped back markedly this week, while Vote Leave’s was much more stable. One possible lesson to draw from this is that anger is a hard emotion to maintain over an extended period, so needs to be saved for when it might have maximum effect. 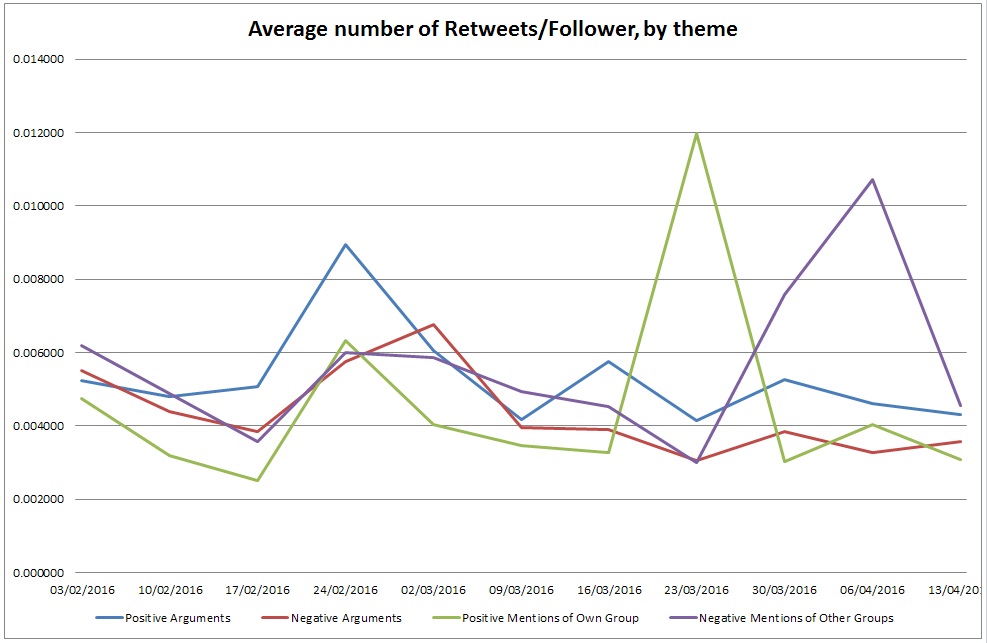 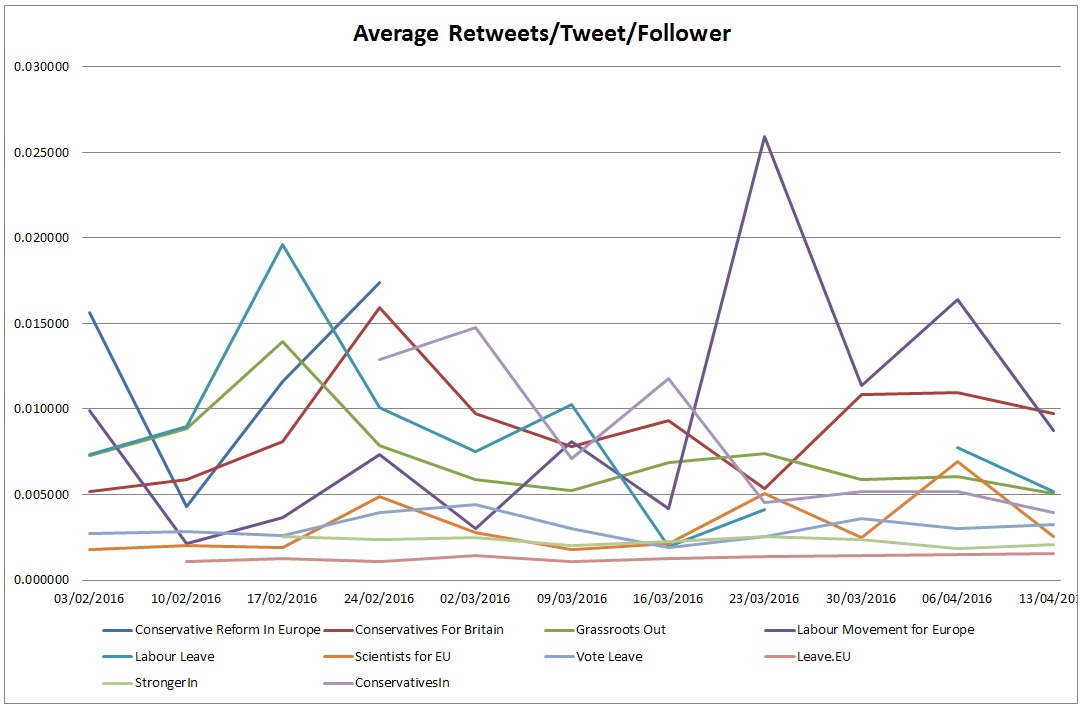 Away from the area of negative tweeting, we find that there has been a slight pick-up in both volumes of traffic and in growth of followers. The decline in the rate of growth that has characterised the period since the European Council in February has been halted this week, although as the charts below demonstrate, it is hardly a massive change. Leave still come into the official campaign with a commanding lead in followers, on both Twitter and Facebook, although StrongerIn has seen a surge in new Facebook followers in the past week. 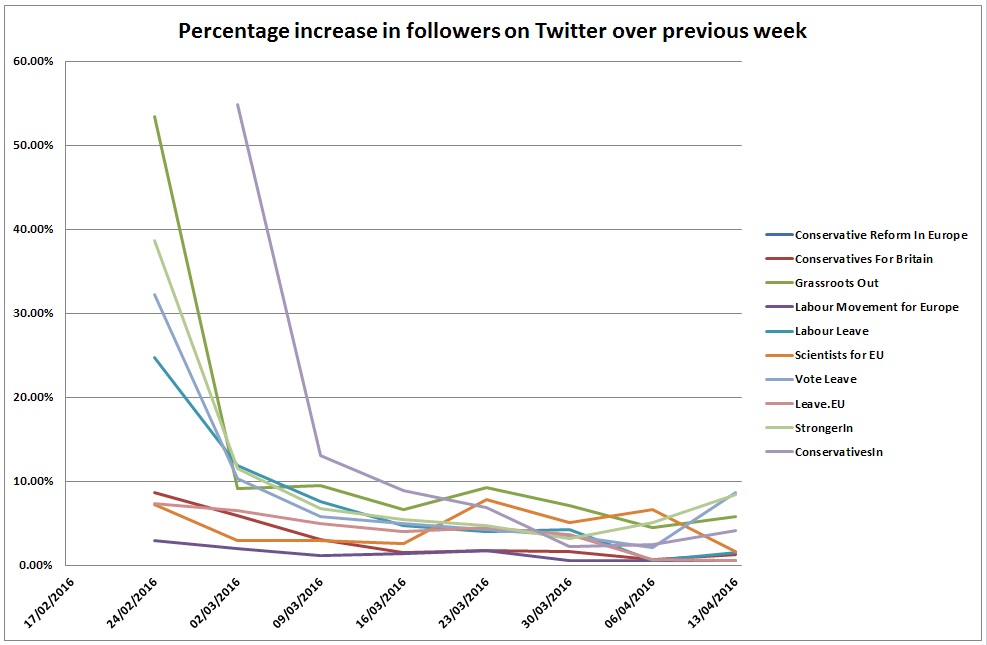 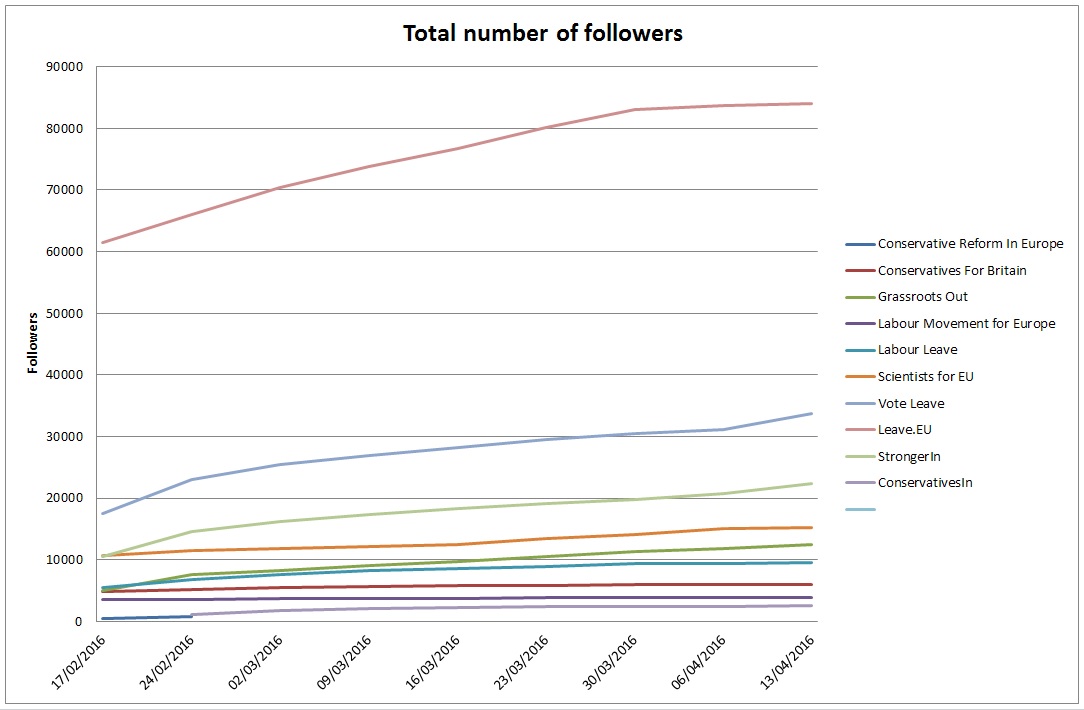 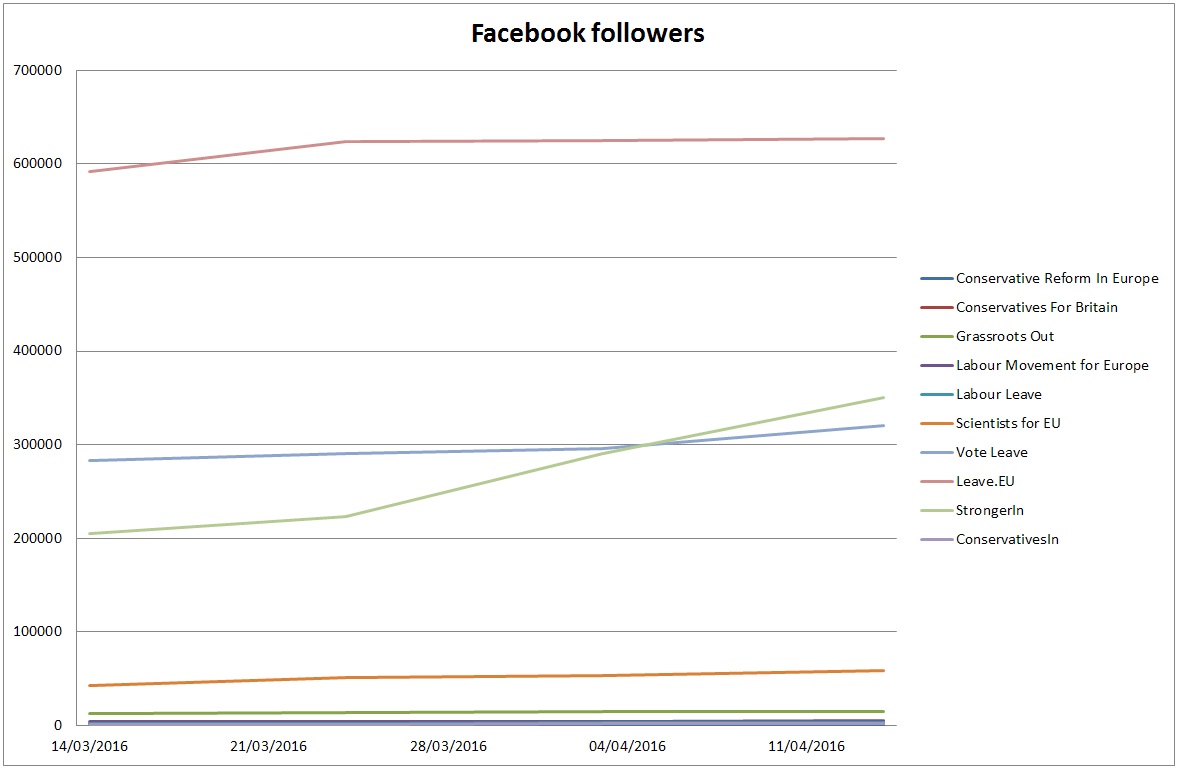 Turning to the themes, there was a noticeable increase in the volume of campaign related tweets, relative to other themes from Vote Leave, driven in large part by the designation story. Whether this is a longer-term change is unclear, but if it continues then it reduces the time given to more substantive lines of argument that would appear to be more likely to interest new followers/voters. 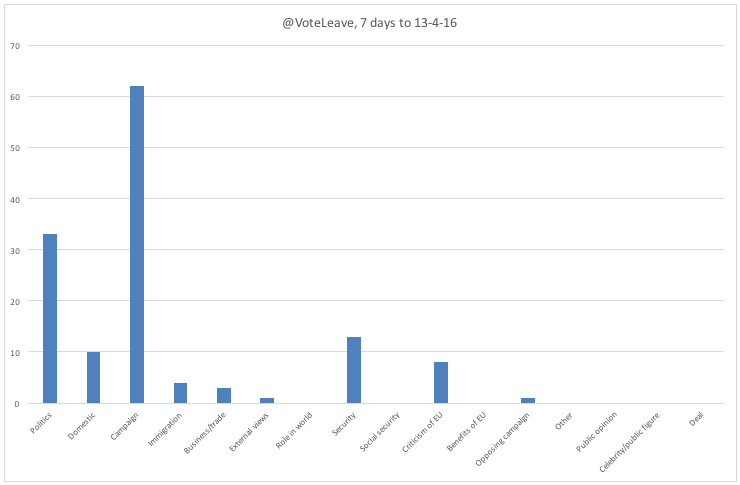 StrongerIn’s tweets were also dominated by campaign related tweets, although they focused on other issues to a greater extent than Vote Leave. 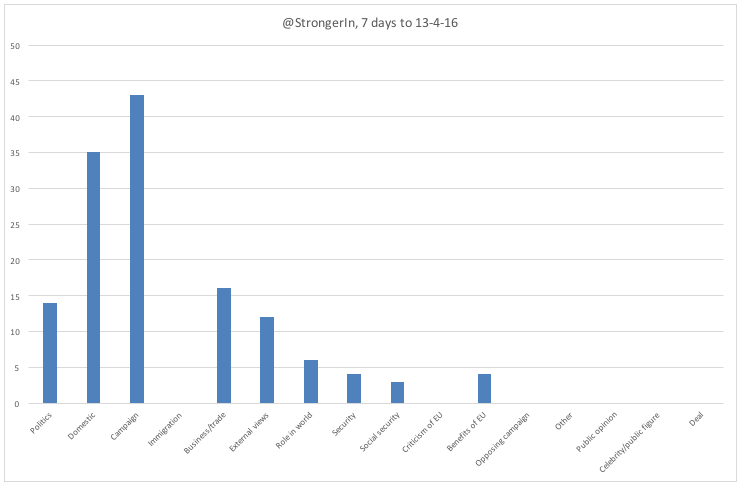 Leave.EU had the broadest spread of tweets across themes this week, with most related to politics and campaign related tweets coming second. 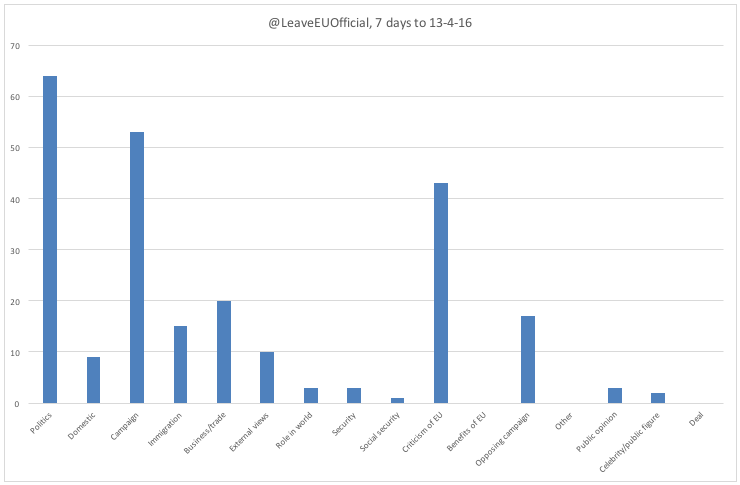 The division of themes between the three groups has remained as in previous weeks, with StrongerIn pushing lines on the UK’s role in the world, business-related facts and the wider impact on domestic policies, and the Leave groups talking much more about the politics of membership. In the next couple of weeks we will be reviewing to what extent the official campaign restrictions have changed (if at all) what is said and how it is presented by the two lead groups. 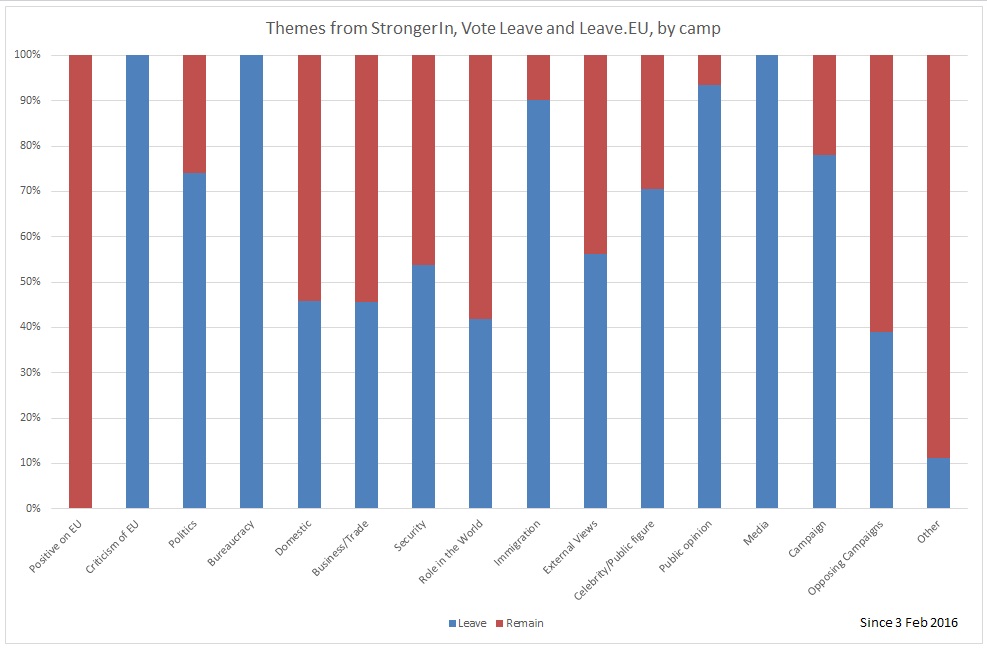 The battle of the designation: the EU referendum debate encapsulated